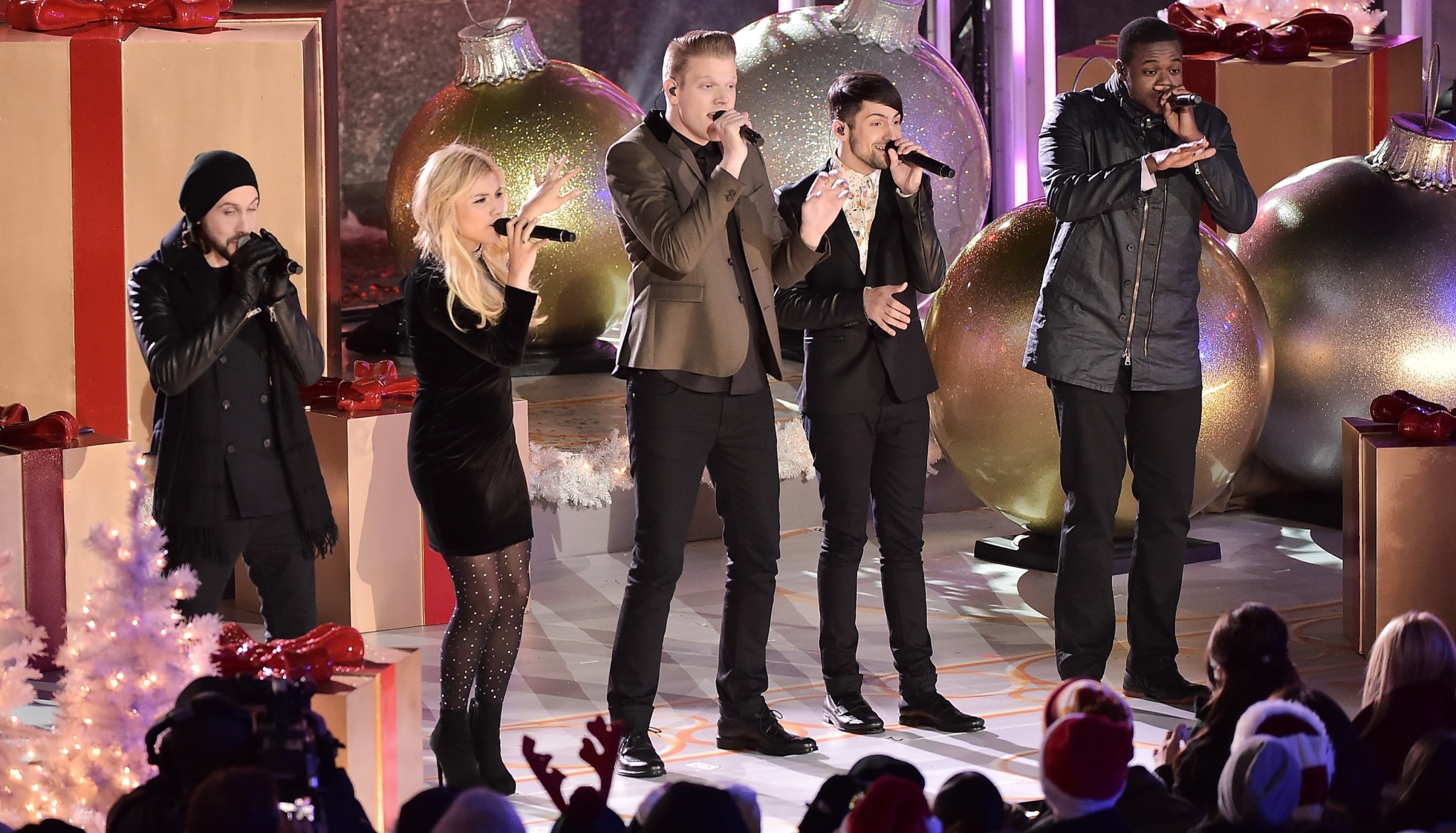 You will be home with the parents soon. You may already be there. Perhaps there is music playing in the background. Does it sound like Pitch Perfect but without any of that Anna Kendrick cynicism?

There’s a decent chance that you’re hearing this:

This is Pentatonix, whose latest album, That’s Christmas to Me, is 2014’s most popular holiday music. Known among Pentaholics (no joke!) as PTX, Pentatonix is like Taylor Swift and Beyoncé mated at an a cappella concert. Actually, Pentatonix should now be considered big by conventional pop standards too. That’s Christmas to Me peaked recently at no. 2 on the Billboard album chart (it is currently at no. 3), making it the highest-charting holiday album by a group since 1962. Pentatonix almost could be from 1962, if not for the occasional “edgy” flourish on That’s Christmas to Me, like the cover of Fleet Foxes’ “White Winter Hymnal” or the reggae version of “Winter Wonderland” that mashes up with Bobby McFerrin’s “Don’t Worry, Be Happy.”

Clearly you are dying to hear an a cappella reggae version of “Winter Wonderland” mashed up with “Don’t Worry, Be Happy,” so here you go.

That’s Christmas to Me is the perfect capper for a bizarre year on the album chart, which upended any sane notion about what popular music is supposed to look and sound like. So much chatter about pop is centered on youth and coolness. But as album sales dwindle down to nothing, what we’re left with is a demographic of loyal customers who are indifferent to trends and really into just liking what they like, such as groups who make music with their mouths. I can’t decide if this means that the album chart should be ignored completely or celebrated for its awesomely contrarian perversity.

How popular is Pentatonix? As of last week, That’s Christmas to Me had outsold the most recent LPs by One Direction and Maroon 5 by hundreds of thousands of units. (It has moved just over 821,000 copies.) Factoring in the last-minute rush to purchase Christmas music to quell the tension at family gatherings, Pentatonix has a real shot at sailing past platinum status this week, which would make it only the fourth album released in 2014 (after Swift’s 1989, Ariana Grande’s My Everything, and Sam Smith’s In the Lonely Hour) to do so.

Yeah, but this is just a Christmas record. Surely, people won’t care about this group past December 26, right? Right?

Setting the sales figures aside, Pentatonix has 433,000 Twitter followers — a far cry from Katy Perry, maybe, but pretty incredible for a group that built its name primarily by gaming social media. After winning the third season of NBC’s The Sing-Off, for which they won $200,000 and a Sony Music contract, Pentatonix was promptly shipped off to presumptive obscurity on a small Sony subsidiary normally reserved for movie soundtracks. The group responded by starting a YouTube channel and focusing on the creation of viral videos. Now the YouTube channel has more than 7 million subscribers, a testament to Pentatonix’s ability to craft Facebook-friendly medleys like “Daft Punk” (109 million views) and “Evolution of Music” (51 million). In 2012, Pentatonix released an EP, PTXmas, that peaked at no. 7 on the 2013 Billboard chart. Earlier this year, Pentatonix signed with RCA.

Is this music good? Honestly, I have no idea. There’s a pretty wide gulf between “a cappella music” and “my thing.” I would certainly describe the ability to simulate the sound of a band and a chorus of singers with just five throats as “impressive,” but I would be equally impressed if those throats were swallowing swords or binge-drinking out of beer bongs.

What I do know is that the record industry is desperate, which means that we’ll probably be hearing more from Pentatonix in 2015 and beyond. The group faces some obvious and some less obvious roadblocks to super-stardom. According to a recent story in the Wall Street Journal, RCA wants Pentatonix to record with instrumental backing and the group is resisting, arguing (rightly) that “the second you add instruments, what makes us so special is lost.”

Then there’s the group’s engine, Kevin Olusola, a Seventh Day Adventist who can’t work between Friday night and Saturday night. The other members have their own quirks: Mitch Grassi (he’s the one wearing that dorky blue coat on the Christmas album cover) is into crystals that “recharge his energy,” Kirstin Maldonado uses an “old-fashioned day planner,” and Avi Kaplan (the one who looks like a member of the Spin Doctors) is described in the Journal story as “the kind of guy who Instagrams sunsets over mountains,” which may or may not be code for “serial killer.”

Those names might be unfamiliar to you now. But they’ll all be implanted on our brains soon enough. The Age of Pentatonix is upon us. All hail tw-tw-shobadidoowah-2015.

Filed Under: Music, Christmas, Pentatonix, The Sing-Off, That's Christmas to Me