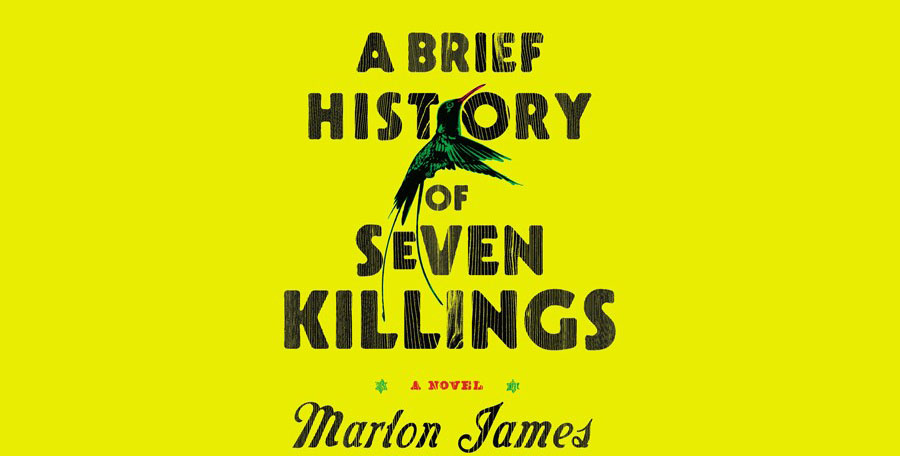 Marlon James’s third novel, A Brief History of Seven Killings, begins with four pages of dramatis personae — lists of elected and unelected officials, cops, spies, fixers, gun thugs, drug lords, ghosts, all catalogued by era and geographic base and gang/party affiliation. Fantasy novels have frontispiece maps of Westeros or Middle-earth; these lists serve a similar navigational purpose in James’s book, which begins with a deceased colonial politician discussing his own murder in 1959 in Montego Bay and ends in the early ’90s, with a woman throwing up outside a fried-chicken restaurant on Boston Road in the northeast Bronx. The 684 pages in between, narrated in more than a dozen distinct voices and numerous shades of patois by a busload of characters, constitute one of the year’s great performances by an artist in any field — a crime novel that swells into a kaleidoscopic secret history of mid-to-late-twentieth century Jamaica and America without ever taking its eye off the brass ring of good pulp.

The novel turns on an actual historical event: In December 1976, a group of would-be assassins stormed Hope Road, the Kingston, Jamaica, home of Bob Marley. As described in journalist and musician Vivien Goldman’s The Book of Exodus, the moment plays like a scene out of a Tarantino movie:

“Give me a juice, nah!” A booming cry in the kitchen made Bob and Gilly look up as Bob’s manager, a swaggering, sharp-witted hustler called Don Taylor, strode in. But Taylor was followed almost immediately by three intruders — gunmen, charging in through the doors at either end of the kitchen. One brandished two automatics like he was Jimmy Cliff in The Harder They Come. They fired round after round, the sound deafening as the kitchen became a battlefield. The Wailers and their militant Dread posse were caught off guard. Indeed, even though this was the moment Bob had been dreading, when the shock came, he froze. Everything went into slow motion. He felt something push him, and he fell down… The bullet aimed at Bob’s heart instead smashed into his upper arm. Later, Bob was advised that an operation to remove it carried the risk of loss of control of his fingers, so the lead would stay there till he was in his coffin.

It was an act of political violence. A looming parliamentary election pitting the Democratic Socialist incumbent Michael Manley and his People’s National Party against Edward Seaga of the right-wing Jamaica Labour Party had polarized Jamaica. Marley was set to play a free concert in Kingston’s National Heroes Park, a gig he’d reportedly been strong-armed into by PNP goons. Marley had publicly supported Manley in 1972 but had become increasingly disenchanted with party politics in the intervening years, with good reason — as Billboard editor and Marley biographer Timothy White wrote in a 1991 Spin article, while Manley and Seaga’s rivalry “masquerade[d] on the world political stage as an ideological tilt … it was more accurately a private contest to see who could sell out his own country the fastest.” Marley performed the concert as scheduled, then fled to London by private jet; it would be two years before he’d set foot in Jamaica again.

All of this provides factual bedrock for James’s account, which veils Marley by referring to him only as “the Singer.” He’s the one central character who never narrates a chapter, maybe because he doesn’t need to — thanks to the reach of his music, Marley’s perspective on this period in Jamaican history is the only one with which most readers will already be familiar. “Rastaman don’t work for no CIA,” Marley avowed on “Rat Race,” released on Rastaman Vibration a few months before the assault on Hope Road, carried out in James’s version by gangsters from Kingston’s Copenhagen City district acting on behalf of the JLP (and by extension, American intelligence.) But by the time James gets there, we’re deeper inside the story, in the heads of the shooters themselves, like the coked-up 15-year-old gang member who busts through the door of the kitchen, blood pounding in his head, an outlaw burning to write himself into history with a pistol:

Josey riddle him thigh, shower him back

And all fall down

From there the book explodes outward, tracing “shottas” and witnesses from the scene of the crime out into the world, where they die or carve out empires in the Stateside crack trade of the 1980s or adopt new names and new voices, slipping out of one story and into another. The bulletproof Marley haunts his would-be murderers like the Shadow — “He beat death and he coming after me. He not even coming, but sitting back maybe on some hill somewhere and setting a trap knowing that people like me born fool, and going fly straight into it.” Other real people flit through these pages, too. Here’s Griselda Blanco, the Black Widow of the Medellín Cartel, fixing yucca for breakfast and “chorizo from a red frying pan”; here’s Mick Jagger up in the club, “prancing like a drunk goat.” Others show up in disguise, notably CIA’s Jamaican station chief Norman Descoteaux (the apparent model for the griping American spook Barry Diflorio) and Shower Posse founder Lester “Jim Brown” Coke. Alex Pierce, the Rolling Stone reporter who chases the shooting story until it threatens to swallow him, is Timothy White crossed with Lester Bangs, whose 1976 Creem travelogue “Innocents in Babylon: A Search for Jamaica Featuring Bob Marley and a Cast of Thousands” may well have informed James’s depiction of American rock journalists working the Bob beat, even if Rolling Stone’s real-life man in Kingston that month was actually a 19-year-old Cameron Crowe.

An opera about bad men shaping history from the margins, Seven Killings evokes James Ellroy or Don DeLillo in dub, although James is a looser, less mannered stylist than either; the stream-of-consciousness stuff we get from the killers brings to mind the more hallucinatory passages of David Peace’s Red Riding cycle. And once the cool American hit man “John-John K” starts talking to us, Elmore Leonard’s specter is also in the room. (“The man was still deep in the newspaper. I never thought anything interesting happened in Miami that somebody would sit down to read about it.”) But the most memorable voice in the story belongs to a woman. Nina Burgess starts out pregnant and desperate in Kingston, then evolves through the years from victim to sage — although she’s wise even early on, when she crosses paths with the Pierce character as they both wait in vain for an audience with the Singer. “It’s not like I’m some goddamn tourist,” Pierce protests when she challenges his understanding of the facts on the ground. “I know the real Jamaica.” Burgess gets the last word: “Good for you,” she says. “I’ve lived here all my life and haven’t found the real Jamaica yet.” No single novel, no matter how dense, can tell you the whole truth about a country, either. But James’s cacophonous chorus comes exhilaratingly close.