Nothing Exciting Should Happen on ‘Homeland’ Ever Again 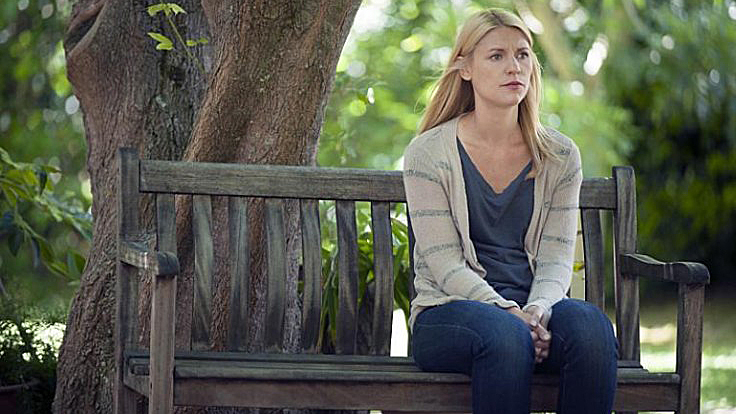 By Homeland standards, pretty much nothing happened in the Season 4 finale that aired on Sunday night. But “Long Time Coming” is one of the best episodes of the last two seasons of the series, precisely because it’s by far the quietest. No one dies, nothing blows up, there aren’t even any new revelations or serious changes of allegiance (with one possible exception). It’s slow. Mostly Carrie Mathison just hangs out.

Normally, Carrie’s home life is one of the least interesting strands of Homeland. Remember when she used to sleep with a bunch of random dudes and drink wine while listening to jazz? As a comedown for the past few episodes — the high-octane embassy occupation, hunt for Quinn, and ridiculously Homeland-y standoff over Haqqani at the end of the last episode — “Long Time Coming” is surprisingly satisfying.

Before the season, actor James Rebhorn, who had played Carrie’s father, passed away. His passing was written into the show, and the finale addressed the death of Carrie’s father, who had been her emotional anchor back in the States. That Homeland was never particularly interested in the personal lives of the other Mathisons (or anyone who wasn’t Carrie or Brody) actually helped the contemplative tone of “Long Time Coming.”

If there was a twist in this episode, it was the blossoming and quick wilting of Carrie and Quinn’s lifeboat of a relationship. These characters are their jobs, in a way that makes it almost impossible for Homeland to tell stories about them as normal people. In a sense, both Quinn and Carrie know this. That’s why they continually warn each other of all the ways they will fail. In the end, when their coupling is aborted, it’s not tragic — it’s just true.

In this sense, the nifty bit of retconning from the previous episode — that Quinn is a habitual quitter who always claims he’s getting out of the spy game for real this time — turns out to be a key moment. If it seems like Carrie and Quinn keep making the same mistakes, it’s not because of lack of character development; it’s a consequence of how broken they are as people. Expecting the same type of “change” and growth we’d get on a different show might actually be unreasonable.

What Season 4 has done, for the first time, is collectively traumatize all of the characters in a way that’s both believable and can effectively rely on the show’s history. In this light, all of the dumb twists and turns — Carrie getting drugged, or Quinn’s interlude in the motel — are just a series of weird rabbit holes everyone was forced to go down. (When was the last time anyone referenced Sandy Bachman, whom I honestly half-expected to show up alive by the end of the season?) After Homeland Benghazi-ed its characters, they might not be capable of doing their jobs.

Imagine a version of the show that’s more straightforwardly focused on the psychological consequences of the spy trade, what happens after everyone has left the service. It’d be totally devoid of fireworks, which is what Homeland does best. But it would be plausible — a spy show in which characters can actually get out of the game. That would actually be kind of amazing.

The scene in which Lockhart, Saul, Quinn, and Carrie are just kind of hanging out at Carrie’s sister’s house is easily the best of the episode, given how awkward and sweet it is. Lockhart brought lasagna! None of these characters can even pretend to function in the real world anymore (something communicated rather well by the fuzzed-out shot of Carrie encountering a playground full of children as if they were aliens). They only have each other.

And that makes the real climax of the season, when Carrie finds Saul at Dar Adal’s house, all the more painful. This is a bit of a rapid shift from Carrie’s betrayal of Saul during his captivity, but if Homeland wants to actually complicate him a bit, and have the bigger story of the show be focused on the relationships of established characters, rather than having them fight villains, it might not be so bad. And besides, it really might be too much to ask for Homeland to tell sincere, long-term-coherent stories about its spies. It has always been about the short game.

Breaking this cycle is a fantasy. Homeland is gonna Homeland. Really, this episode should have aired during Season 1. It helps explain what makes Carrie tick — things she doesn’t understand, even through several on-the-nose conversations with and about her long-lost mother — and it probably doesn’t signal anything other than the calm before yet another storm. But “Long Time Coming” hints at something more like a shift in gear, a way of making Homeland slower and focused on the actual homeland. That would be fascinating to watch.

How 'Breakin' 2: Electric Boogaloo' Became a Movie and Then a Meme