We Went There: Sleigh Bells as Senseis of Self-Destruction at Terminal 5 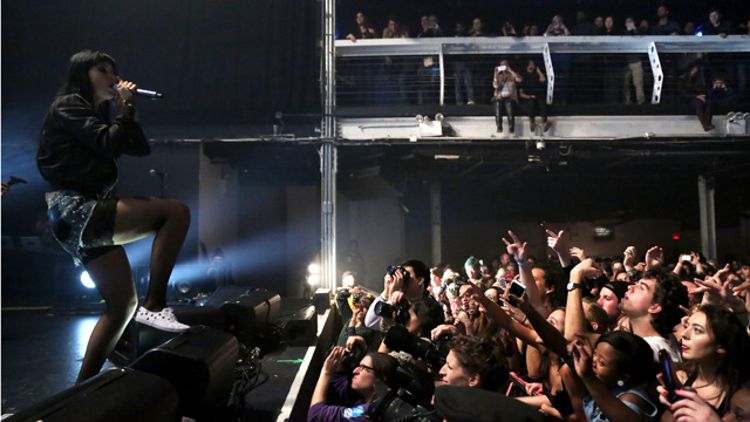 Before lining up to check my coat on Friday at Terminal 5 in New York, I peek down over the balcony. A packed floor stares at a purposefully weird act called Doldrums. No one in the crowd’s doing anything except pointing their faces in the right direction. It’s a bad omen — I’m not here just to see a show; I’m here to try losing control for the first time in a long while.

I find a spot near the front, shunted way off to the right side, past the stage. I watch (the?) Doldrums, looking for the part of myself that used to give fair shots to opening bands I’d never listened to. A red LED display at stage right says it’s 9:25; Sleigh Bells aren’t scheduled to appear till 10:50. Watched clocks have always ticked slower at concerts than anywhere else for me, but it worsened once I could get into bars. Suddenly there was no bigger miscalculation than entering the venue any earlier than midway through the band before the band I actually came to see. Tonight I’m early, interested to see if the wait will help me remember an old anticipation — not the kind I can tweet, but the kind that’ll fill me with adrenaline and poor decision-making skills.

Danny Brown raps a strong set, full of bangers from his excellent album Old. He leaves, the PA crackles with Yeezus’s “On Sight,” followed by some Michael Jackson. Ten minutes before Sleigh Bells are due, I’m close to the center of the floor, although more than 20 people away from the stage. I’m threatened by my secret criteria for the night: I’ve gotta sweat, I’ve gotta crowd-surf, I’ve gotta mosh. I’ve left myself no option but to turn the dial to 11, to plunge into the most reckless pocket of the throng and hopefully reclaim something there. Then the lights dim, the PA blares a drum-line intro, and Sleigh Bells are out, like the tigers loosed on Russell Crowe in Gladiator.

When I was 15, my friends and I made a horror movie and won a radio station contest for Rob Zombie tickets. From that first concert in Lewiston, Maine, going to shows was like a sport my friends and I could invest ourselves in years after we’d all quit soccer and failed to pick up anything else. Once and sometimes twice a month, we drove 10 hours round-trip to Worcester, Massachusetts, to the big, brick Palladium, the closest venue in New England that got the bands we wanted to see — technical, über-serious, preposterously heavy acts, usually from Sweden. Our paychecks from dishwashing and drive-thru-jockeying started getting eaten by gas money and ticket surcharges. Once we saw Poison the Well, a hardcore band with a guitarist who’d break away to form Sleigh Bells.

It was important to mosh at the shows, to crumple our ribs against the stage’s metal barricade, to be hypersensitive to juvenile altercations. (Slam into my friend? I spit on you. Threaten my friend? I sneak-punch you. We were awful.) Our childish feelings of invincibility ripened to stupid completion in our teens, and this music we’d co-opted into a lifestyle was the ultimate battleground. It was a loss if we didn’t come home with sore throats, sorer necks, and maybe a brush or two with grievous injury. (There’s a photo of me, at a small-potatoes gig in a VFW hall in Maine, hanging from a wooden rafter by my knees, moving through the air like a pendulum, fists thrashing maniacally.)

That all faded midway through college for me, when metal lost its choke hold on my preferences. Heavy music became what I knew best but listened to the least. Same with my friends — the fellowship had indeed broken. Concert-born insanity shifted to appreciative standing, or worse, boring sitting. Music was already losing its power to shape me, and the new types of shows I found myself at (people just dance? Without hitting each other?) weren’t the cathartic experiences I grew up with. I resigned myself to approaching concerts like Adults approach Art, even if the Art happened to be electrifying music. It bummed me out: Once I believed that seeing a nonstop shred-and-scream act like Finland’s Children of Bodom (for a third time!) could change my life; now I was standing at the back, reading tweets — even at a Bodom show I was attending purely as a nostalgia grab. Four times out of five, I went home feeling empty, like I’d seen a forgettable movie. I’d been on the field; now I was in the stands.

Then, at Bonnaroo in 2011, the first few notes of a Brooklyn noise-pop duo convinced me I could recapture that teenage psychosis where jumping heedlessly into a sea of strangers is perceived as a joyful and wise way to pass the time. For the uninitiated, this was the sound that pushed me to the edge:

Sleigh Bells are Alexis Krauss, the raven-haired, cotton-candy-voiced front woman, and Derek Miller, the distortion-obsessed guitarist/composer. They’re what arena rock would sound like if it had been invented in Williamsburg in 2010, and 90 percent of their songs play like three-minute explosions. At Bonnaroo, before I reached the epicenter of the blast, something hit me: Being a self-immolating concertgoer as an adult — a then-insuranceless adult — is maybe not smart. I started second-guessing myself and my ability to have it both ways as a tame and wild concertgoer. I left, not wanting to watch from the way-back anymore, not wanting to admit defeat.

Tonight, Sleigh Bells are touring their third and I think best album, Bitter Rivals. The songs are their most dynamic yet, springing with singability, fleshed out with complete left turns like acoustic guitars. The spark is not only intact but hotter than ever. They’re playing as a four-piece. They’ve got a second guitarist and a drummer with an all-important double-bass pedal. Alexis, though, is the beacon. She’s wearing a boxer’s cape she’ll fling off through the first crashing cut, “Minnie,” a song that turns Minnie Riperton into a legend of metal. Alexis is a champion and a demon. She’s got the full repertoire of moves a showy performer cultivates over time. Sleigh Bells are the happiest aggressive music I know, and they’re ready to rumble.

By “Crown on the Ground,” the fourth song, I’m jumping nonstop, another thing I just stopped doing somewhere along the line. I’m sweating 10 seconds into the song, ready to vomit within a minute. There’s no respite — “Bitter Rivals” is up next. Derek and his co-shredder pound their axes ferociously on every note. Energy is happening, so much of it. It feels like everyone is participating rather than observing, making something instead of watching it.

It’s all going by really fast, too, as I know these things do when a band is bound to play an hour at the very most. I’m having so much fun I don’t care about my criteria or how badly I’m failing my teenager test. I’m still looking to go further into the abyss, though. Unabashed air guitar, medium-heavy headbanging, and fairly free dancing in a thick sea of people isn’t enough. I need to get to the front or into a mosh pit. But even in this ruckus, I can’t be brash enough to simply wade through. Crowd-surfing isn’t an option. Two women have briefly been hoisted on shoulders, and that’s it.

“This is gonna be our last song” comes out of Alexis’s mouth and “Infinity Guitars” hits. I haven’t even seriously attempted a move to the front. I know they’ll be back for an encore; that’ll be my chance. They return, after maybe 20 seconds away, to “Young Legends,” a great new jam. But Derek’s playing acoustic guitar, and you can’t push through to the front while someone plays acoustic guitar. “Sing Like a Wire” is next, and I’ve got no one to blame but myself now. That song screams.

Finally, “A/B Machines.” Not my favorite Sleigh Bells offering, but it’s obvious it’ll be their last. My politeness evaporates in a puff. I barrel ahead, thankful and surprised I don’t smash anyone in the process. I’m a couple people from the front. I’m in the land of foggy eyeglasses and sweat-slick strangers, where the air’s like a YMCA locker room. I’m part of the monster, yelling “WOO! WOOOO!!” over and over and over, possessed, shameless. Alexis climbs off the stage, the only one to crowd-surf tonight. Then it’s over. We unglue ourselves from each other, breathless and tender, and start shuffling away, stunned, fans whose team just won so hard. My neck’s gonna hurt tomorrow.

Know Your Beef: Beastie Boys vs. GoldieBlox, the Company That Used a 'Girls' Parody in a Viral Commercial