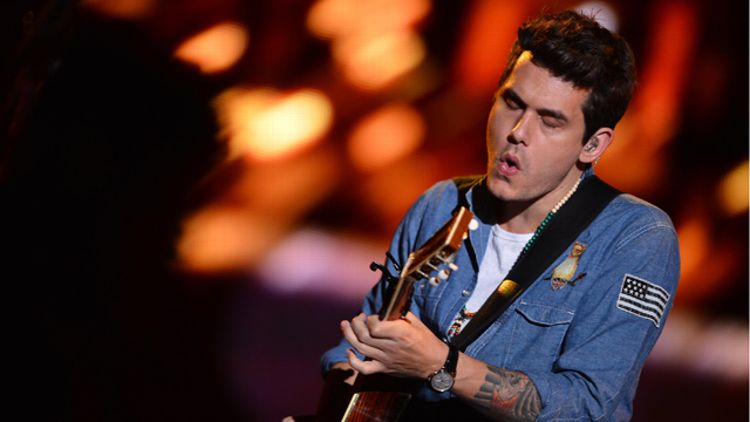 On Saturday night, Grantland sent Tess Lynch and me, Molly Lambert, to the Hollywood Bowl for the Los Angeles stop of John Mayer’s Born and Raised tour. We were excited to bond with our fellow Angelenos in the comfort of a legendary venue after a humiliating week of having to tell our friends that our Saturday night was blocked out for a John Mayer concert. As other reviews have noted, this tour has been a bit of a redemption arc for Mayer, who went silent after a few rounds of exceptionally bad press and an emergency throat surgery for granuloma. Mayer was in a mellow mood, serving up past smashes and future ones, almost all of them fairly midtempo. We watched couples bunny-hug and vulnerable female fans lose their shit, all while we listened to Mayer’s legendary guitar prowess with the bonus of seeing the accompanying legendary guitar face. Would Mayer slip up and say something uncouth? Would he bring Katy Perry onstage to duet? Tess and I spent a magical night at the Bowl pontificating on Mayer’s new country/classic-rocker image and music, his fans, and where that aioli smell was coming from.

Molly Lambert: So, Tess, what are your general thoughts on the John Mayer live experience?

Tess Lynch: Well, on the one hand I was extremely disappointed that Katy Perry didn’t bust onto the stage in her whimsical floral dress. On the other hand, I think attending this John Mayer Live Redemption Tour Experience was super-interesting just by virtue of it having a pretty snappy crowd. There were a lot of people crying. Some of them fled to the concessions area to cry, including a mother and a daughter, both weeping openly in each other’s arms. There were a few drunk couples having emotional arguments. We made a few friends. There was a clear divide: people who were jazzed to be seeing John Mayer, and people who had been dragged along. We were somewhat segregated from everyone else, as evidenced by the cold stares you and I endured when we were seated between hardcore Mayerites who had just finished eating tubs of food drenched in aioli. I think there was music, too.

Lambert: I do recall some music.

Lynch: I saw Mayer 10 years ago with some other musicians (and this is just going to murder any remaining credibility I have), when he played between Room for Squares and Heavier Things. So I felt a pang when I heard “Why Georgia,” but everyone else was really swept away by his more recent songs, of which there were plenty! What were your general impressions?

Lambert: Let’s just put it out there, Tess: You saw John Mayer open for Counting Crows.

Lynch: Adam Levine was there too … jerk.

Lambert: I assume you’re calling me a jerk for outing your onetime Counting Crows fandom, and not speculating on the character of Adam Levine.

Lynch: Zing. That was actually a question you raised: Would an Adam Levine concert have been any more, say, unpredictable?

Lambert: And by Adam Levine you mean Maroon 5? I think that’s a whole other ballgame, since M5 is a band. Mayer was undeniably the star here, although he had an excellent backing band, who seemed just as enthralled by his stage banter as the audience.

Lynch: He said he was going to rein in the banter, but there are no dams at the Hollywood Bowl. Emotions flow.

Lambert: Mayer is a rock star, for sure, and he knows it. He’s not exactly a hard rocker, although there were flashes of shredding that you and I both wished would have continued, but the audience seemed eager to move past that to get to more John Mayer songs they knew all the words to.

Lynch: Well, when he launched into “Driftin’ Blues” and we were in the garlic fry trenches, we shared a look like, “Where’s this going? Are we about to go to The Place with John Mayer, The Place where he is singing to the two people out in F3 who have cynical hearts?” And then 15 seconds later, it was gone. Can we talk about when he covered “Friend of the Devil”?

Lambert: If anything could thaw my heart toward John Mayer, it’s probably a Grateful Dead cover.

Lynch: It wasn’t a Deadhead sticker on a Cadillac?

Lambert: He did pick a pretty loping tempo.

Lynch: The tempo was uniformly slow. Watching Mayer’s face contort is a majestic experience. He has earned his guitar face. Among the friends we made was one guy who was older, very drunk, and seemed reluctant to admit that he was a fan. So he kept reiterating, “We can all agree he’s an amazing guitarist, right? Everybody agrees on that, right?”

Lambert: I mean, look, it was a gorgeous night at a beautiful venue. I know we took this assignment mostly so we’d have to suffer the humiliation of telling everyone we were going to see John Mayer somewhat of our own volition, but the joke was on us, and it was totally fun.

Lynch: It was. The effects were splendid too. The visuals made him look like he was an exhibit at the Natural History Museum. Oh look, a metaphor … he’s evolving.

Lambert: We can also agree that he is a very handsome man. A tall drink of cold lemonade full of mint sprigs. I think our notes read “Guitar face. Aioli. Handsome.”

Lynch: I speculated about who in the audience was a virgin. I felt confident about my choices. Do you think everyone was secretly disappointed about the omission of “Daughters” and “Your Body Is a Wonderland”? I mean, were you? Now that you’ve told the world that I shelled out money to see Adam Duritz, you monster?

Lambert: I imagine he’s probably totally sick of those songs, but I’d be lying if I said I didn’t want to hear that “bubblegum tongue” line IRL.

Lynch: I was surprised at the age range at this concert. We met a drunk kid who’d lost his phone and his friends, and when we tried to help him by offering one of ours so he could find them again, he texted Emily Yoshida. [Editor’s note: In an ironic twist, Grantland’s Emily Yoshida opted out of the chance to attend the concert.] And then there were some grandparent-aged folks swaying to “Gravity” during the encore.

Lambert: He did one long intro about the person who saved his life last year. The audience clucked that this had to be Katy, but it was actually the doctor who saved Mayer’s voice.

Lynch: His voice sounded great, too.

Lynch: I realized that I wanted him to shake things up to the point where he’d really alienate his fans and become unmarketable. It was unrealistic, but it was my fantasy. I mean, Phillip Phillips had a crazy-sounding set. He’s obviously emboldened, for better or for worse. We missed Phillip Phillips on principle. Actually, that’s a lie, it was because of a ticket-printing glitch.

Lambert: It was difficult to be too hardened against the Mayer experience, because all around us were the aforementioned crying girls, plus couples swaying in that slow-dance way, and copious amounts of older folks who seemed moved by the folksiness of it all. As two shred-heads who hoped that every song might turn into a 20-minute jam sesh, we were definitely not in the majority. But that’s fine! John Mayer doesn’t have to prove his skills to us at a show already filled to the brim with acolytes. We kept speculating about what a show in a smaller room could be like, with a set list less tailored to pleasing the fans. Did I mention he’s very handsome and charismatic?

Lynch: In a way, it made Mayer seem generous. He understands his market well, but he does always tease that there’s more to him than the image he’s nurturing back to health. When he stopped grooming himself (ah, the off-the-cuff interviews), he was slammed for it. If this was an effort at building the trusty, sentimental foundation back up, it was a success. At the same time, I kind of look forward to seeing an old, craggy Mayer playing prog-rock covers in a basement in 30 years. I felt like I was looking into his musician grimace for that person, whose audience will have scattered or aged out. Or maybe that’s just something we do to really good-looking people: project what we want onto them, and decide not to be too harsh when we don’t get it.

Lambert: Honestly, we fell into the same trap that every John Mayer fan probably does, which is to speculate that we’d get along with him really well if we could just get him alone to really rap about music. We’re the people who want a John Mayer album that’s even rootsier than Born and Raised, that would show off Mayer’s impeccable guitar skills without having to fit in the framework of traditional songcraft. But you’re totally right, he’s still rebuilding the trust between performer and audience, and, man, does that audience trust him.

Lynch: By the way, I know you were stunned by Taylor Swift’s ability to worm her way into your heart when you saw that concert with Emily last month. How did J.M. compare?

Lambert: It’s not a fair comparison because I’m more of a genuine Swift stan than a Mayer one. I don’t really know Mayer’s catalogue beyond the singles, although I did spend some very dark nights with Battle Studies during a weird time in my life. For John Mayer to appeal more to us, he’d have to lose some of the incredibly broad appeal that has made him the ultimate sorority-girl heartthrob. And I mean, why should he care about us? Forget about us. Swift is equally gracious in catering to her fan base, and even though I might like to hear her do an hour of Emmylou Harris covers for my own sake, it’s not her responsibility to show me her range. Girl has proved herself, many times.

The same goes for Mayer. He still seems smarter than his body of work (bigger than his body?), and there’s this feeling that he is not fully capitalizing on the potential he has as one of the best living guitarists. I was comparing it to a Hall & Oates show I saw at the Hollywood Bowl a few years ago, where they strayed from their canon of hits to do a long, very authentic straight soul cover of “Me and Mrs. Jones.” They lost everyone in the audience wearing fake Oates mustaches and screaming for “Private Eyes,” but I was totally rapt and enchanted, and for me it was the highlight. The contrarian in me would like to see Mayer do a Self Portrait–type album covering the ’60s and ’70s rock that clearly inspires him. I’d kill to hear him do “Midnight Rider,” for example. Or maybe he and Katy could cover some of those Gram Parsons and Emmylou Harris songs? But that’s just what I want for my own personal curiosity. The audience was perfectly happy with the really cool backdrop, brisk October night, and Mayer highlights past and present, like “Stop This Train,” “Dear Marie,” and “I Don’t Trust Myself (With Loving You).” And honestly, we had a great time.