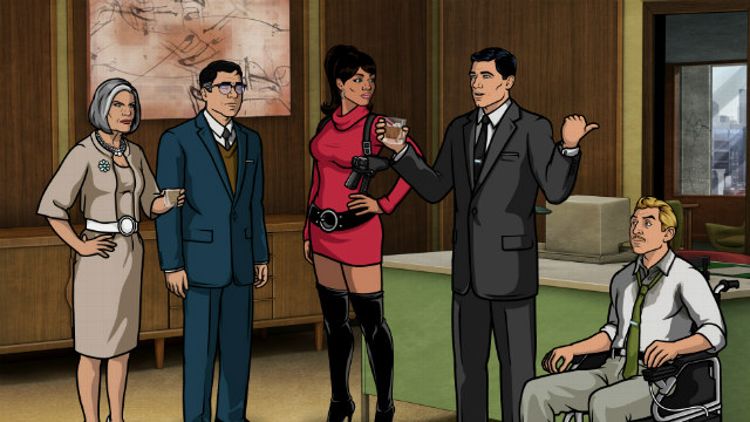 As a cultural mecca of sorts, L.A. has many extracurricular options on any given Saturday night. Catch your struggling actor friend’s one-man sock-puppet show in Hollywood’s theater row. Sip Pabst tall boys at your struggling stand-up friend’s UCB debut. Or flirt with a vegan while ignoring your struggling musician friends’ set at the Echoplex. But sadly, L.A. lacks a tentacle-porn karaoke theme bar with an NC-17 beat-poetry open mic night. Fortunately, Archer Live! came to town this weekend, and for two glorious hours, Club Nokia was transformed into a debauched den of hypersexual animation, casually spewed racial epithets, and unapologetic alcoholism. You could smell the bourbon fumes at the Kings game across the street.

If, like me, you are only now catching up on FX’s brilliant, twisted James Bond animated parody from the Adult Swim impresarios behind Sealab 2021 and Frisky Dingo, Archer Live! is basically the traveling road show they (and the voice talent behind the series) put on to promote the upcoming season, which debuts on January 15. Of course, “promote” may conjure images of stifling Comic-Con panels where stars fight flop sweat while trying to sate rabid fan boys with adequate answers about their character’s extended family tree. Not that there wasn’t a foaming-at-the-mouth, boundary-crossing element to the night’s proceedings, but at Comic-Con you won’t catch Aisha Tyler (who voices over-endowed and overqualified ISIS agent Lana Kane) practically ripping the wax off a handle of Maker’s Mark that a fan would later chug onstage. Nor do Comic-Con Q&As typically involve earnest public requests for a threesome from a pregnant couple, which Tyler artfully dodged by saying, “I’m so … kind of flattered?” Oh, and Sterling Archer himself, H. Jon Benjamin, would mock-fellate executive producer Matt Thompson before the night was over. But I’m getting ahead of myself.

Maybe it’s because the cast records their lines separately and never really sees each other unless they’re out promoting the show, but there’s clearly a pent-up demonic sexual tension there that they exorcise during the live readings. The putative format — live readings of select scenes from past Archer episodes — seemed more like an excuse for the cast to carouse, bear-bait fans with beloved catchphrases, and basically stumble around stage like sloppy drunks fishing for a one-night stand as the bartender yells last call. And I mean that as a compliment. In this iteration, Lucky Yates, the voice actor behind ISIS’s tentacle porn–aficionado Dr. Krieger, kicked things off with images from the Krieger Twitter feed, which he manages. Next he shifted into pure manipulative pandering as he got the crowd to chant-demand that FX green-light a Krieger spinoff, The Krieger Bunch — picture The Brady Bunch with anime robots and failed clones — which he recorded on his iPhone for the network. (It’s apparently a bit Yates does at the live reads, which must be working because he got an opening credits card for Season 5.) After the grandstanding, Yates brought out Amber Nash, who voices Pam, the show’s plus-size sexual freak/HR person; Chris Parnell who does sad-sack accountant Cyril Figgis; the aforementioned Tyler, of Maker’s Mark fame; and finally, Benjamin. Presiding over the scene readings like an indifferent god was producer Thompson.

Parnell kicked it off with a fake scene he’d written, the conceit being to get the other characters to praise the much-maligned Cyril. That dragged on a beat too long, but Parnell sensed the crowd turning and placated them by queuing club music and twerking onstage — surprisingly adorable. Then there were two actual scenes the cast stumbled through, hurling catcalls at each other and generally cracking up: the first from Season 4’s Sealab-tribute and the other from Season 3’s space station two-parter. These were mostly notable for Yates’s impression of respective guest stars Jon Hamm and Bryan Cranston (e.g., swinging an imaginary foot-long schlong around with his hips). However, for the second reading, the cast called up cosplaying fans to act out the parts, which again devolved into innuendo-laden chaos. Next, they cleared the stage for a showing of Dr. Kreiger’s debut film, an anime-style tentacle-porn magnum opus answering the age old-question, “Which is mightier, the penis-tentacle or the robot cock-sword?” (Robot cock-sword, duh.)

The Q&A wasn’t all sexual propositioning and line-crossing, though. Thompson shared the Season 5 spoilers Adam Reed & Co. had already spilled at the New York Comic-Con and showed the cold open from Season 5’s premiere — an elaborate ballet sequence that ends with ISIS headquarters going up in smoke. Apparently, Season 5 will see ISIS disbanded by the FBI, sending each character on their separate ways [SPOILER ALERT for those who don’t want to know anything]: choke-fetishist secretary and railroad heiress Cheryl Tunt will shoot into country music stardom while the rest of the gang goes into drug-dealing, literally trying to move one ton of cocaine. Thompson flashed a Miami Vice–style title card (Archer Vice) and explained that the writers decided on such a radical departure from the show’s core premise because they were “bored.” (Nash piped in that Thompson’s main motivational strategy is to tell the staff that if he’s not in his office looking for new porn, they’re not doing their job right.) Thompson also promised the return of some favorite characters: Ramon Limon, Charles and Rudy, and Mr. Moto. Sadly, there are no current plans to bring back beloved black Jewish secret agent Conway Stern — though no fewer than two black Jewish security professionals identified themselves during the Q&A before Thompson finished the evening with a lightning-fast montage of Season 5 scenes, of which I can only remember Ray Gillette crying while wetting himself in his wheelchair.

Other Q&A highlights included Thompson dodging a fan’s question about what the hatch marks in Pam’s back tattoo mean, because, no joke, it will be a plot point in Season 5, and Thompson sharing the one change the network has ever forced on the show. In Season 2’s “Swiss Miss,” the German billionaire’s daughter with the underage hots for Archer was originally written as 15. The network asked them to age her up to 16, and everything was A-OK after that. However, the ignominious highlight of the night had to be the second question: A dead-serious fan asked Thompson how he snuck the “labia” in the opening credits past the network censors. Everyone onstage listened incredulously as the fan insisted that the go-go girl silhouettes over the title card had tiny but identifiable labia shadows. He was, of course, mocked, until bringing up an iPad freeze-framed on the credits. The cast spent a full five minutes debating/riffing on what the pixel-sized curve in the silhouette represented.