We Went There: At the Beastie Boys vs. Monster Energy Drink Trial, Ad-Rock Swears to Tell the Whole Truth 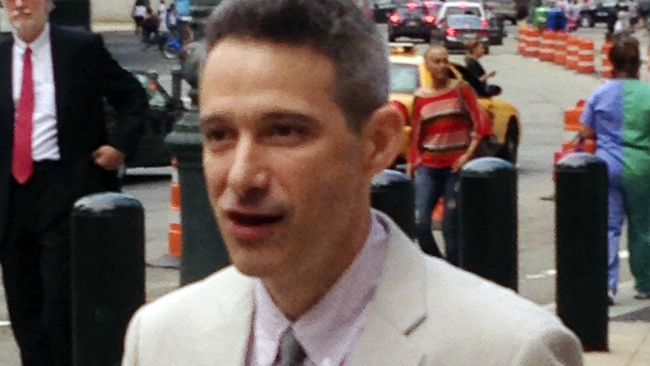 On Tuesday afternoon, at the stately Thurgood Marshall courthouse in downtown Manhattan, Beastie Boys and Monster Energy Drink finally squared off. It was nearly two years ago that the band filed their lawsuit against the excitable energy drink maker, alleging that their music had been illegally used in the company’s advertising. But unlike in their recent tussle with GoldieBlox over unlicensed tunes, in all that time, no settlement had been reached. And while Monster has already conceded that they did, indeed, use music without asking, they’ve attempted to chalk it up to an honest mistake, and thereby reduce the amount they owe — which, by Beasties’ lawyers’ estimations, comes out to a cool $2 million. And so, the battle was on.

Mike Diamond — in a dapper gray suit and Nike Frees, with some stubble on his face and a hiking backpack in hand — was present. So was Adam Horovitz, in his own gray suit, plus a multi-finger ring and one wonderfully elaborate tie clip, as was his partner Kathleen Hanna, who went understated in a striped polo in jeans. As they walked past the security guards, one mustachioed ex-NYPD type had a moment of semi-recognition: “That’s one of the Beastie guys? It is, right?”

Upstairs, there were plenty more opportunities for juxtaposed oddness. After the kindly but controlling judge got done explaining the concept of circumstantial evidence to the 10-person jury via an anecdote about a wet umbrella, and promising them a free continental breakfast, he then introduced “the plaintiffs, the Beastie Boys,” for the first time. And when their boyish gray-haired lawyer made his opening statement, he made sure to nail one point in particular to the “ladies and gentlemen of the jury”: “The Beastie Boys, as you’ll learn during the course of this trial, are an iconic New York band.”

And that, alone, must have been amusingly awkward enough for Diamond and Horovitz: to know that this calculatedly unbiased jury — an older-skewing, racially diverse group — would not have been allowed to step foot in that box if they had anything more than a sketchy bare inkling of who the Beastie Boys are. In that vein, there would be more. See, the Monster advertising in question was a video of a branded event in Colorado, during which the Beastie Boys music was played by DJ Z-Trip; basically, Monster is now attempting to claim that Z-Trip misled Monster into believing that he, himself, had cleared the music for use in the corresponding wrap-up YouTube video/ad. The reason why? An email he sent back, after viewing a rough cut of the video, that read only one word: “dope.” Explained Monster’s lawyer, who looked a bit like a meaner Bob Balaban, in a bit of modern linguistics: “Dope means ‘great, fabulous, fine, I love it.’ It’s slang, positive slang, indicating approval.”

Quickly, the reason why this particular video might have so rankled the band became clear. It turns out the Monster event took place only days after Adam Yauch passed away, which meant a lot of the DJs playing the event paid homage by playing Beasties songs; then, in the corresponding ad for the sickly sweet caffeinated beverage, an opportunistic, ungainly “RIP MCA” is tagged on.

Taking the witness stand, Horovitz explained that the band, since the beginning, had agreed never to do product licensing: “as musicians, it’s a form of selling out.” When asked if they might have approved this, in the particular case of Monster, he defiantly answered “absolutely not.” But he reserved particular disdain for pointing out how, “in the Monster green logo, it says ‘RIP MCA.'” (Making this all tougher: For what presumably were technical legal reasons, Horovitz had to state when and how Yauch had died.) It seemed the band felt Monster was attempting to slyly shepherd the outpouring of love and respect that followed the passing of Yauch into its own camp — as the phrasing of the lawsuit put it, “confus[ing] the public into believing that plaintiffs sponsored, endorsed and are associated with defendant Monster.” And if turns out to be the case — yes, that’d be super fucked up.

There were lighter moments, though. Upon first taking the stand, Horovitz was asked both to adjust the microphone so that the room could hear him better, and spell his name — two things he’s done plenty of times before, albeit under slightly different circumstances. Establishing their bona fides, he talked about how the band had been “very lucky” in selling millions of albums and playing thousands of shows worldwide. He talked about how playing Madison Square Garden, and looking up to the rafters at the retired jerseys of Willis Reed and Walt Frazier, was such a singular joy. He recounted how the band had played SNL and Letterman, and, fighting hard not to smirk, The Joe Franklin Show, too — a lesser-known program, almost certainly snuck in there just to make his buddy Mike D laugh. Introducing himself, he said, simply enough, “I’m a member of the band Beastie Boys.”

But the best stuff came during the cross-examination from the defense. Seeking to mitigate their action by proving that the band has, in fact, done product licensing before, a lawyer for Monster brought up The Mike D Watch, an item produced by the company Nixon a couple of years back. It was both true and not that this was a prior case of product licensing: As Nixon explained at the time, sales of the watch benefited “WKCR-FM, Columbia University’s non-commercial student-run radio station … located in Beastie Boys’ hometown of New York City and … chosen as the beneficiary by the group themselves.” (Side note: The settlement from GoldieBlox is also going to charity.) But first, in another bout of exhaustive legal technicality-ism, the lawyer had to establish that the watch in question was, in fact, the watch in question.

Handing Adam an image of the watch, the lawyer asked, who is that depicted on the face? “That is Michael Lewis Diamond,” Horovitz answered, with great pep, for reasons that would become clear quickly. “AKA Mike D.” He’s dressed as a sailor? “Oh yeah.” He’s wearing a captain’s hat? “He sure is!” And he’s wearing an ascot, or a scarf, around his neck? “Can’t say for sure — but it seems to be the case.”

Soon after, the trial broke for the day. Horovitz got off the stand and was greeted by Hanna with a hug and whispered words of encouragement. Afterward, news cameras would catch them leaving the courtroom, hand in hand. “That’s a cute little camera you have,” Hanna told the photographer. “It is! Check out the Daily News website later,” he answered. Climbing into a cab, she shot back, “check out my butt!”

Filed Under: We Went there, Beastie Boys, Adam Horovitz

The 'Undateable' Comedy Tour: How to Launch (or Not Launch) a TV Show in 2014