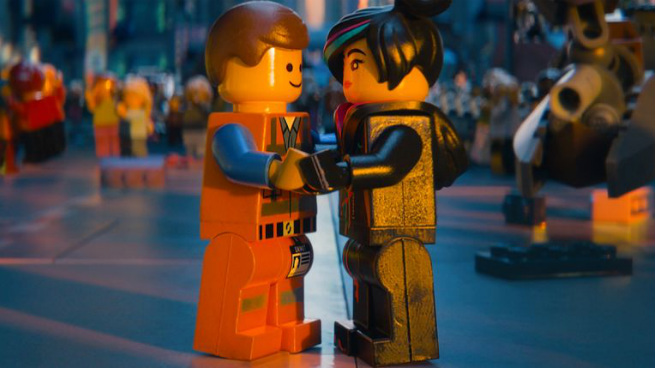 The Lego video-game adaptations of various film properties (Raiders of the Lost Ark, Christopher Nolan’s Batman trilogy) have been so tremendously popular that of COURSE someone thought turning Lego itself into the star of a feature film might also work. But it would be tricky! Better get a guy who’s already made magic with another potentially dicey pop-culture reimagining. Or maybe a couple of guys.

Phil Lord and Chris Miller already have a background in animation, having cocreated MTV’s beloved cult series Clone High. And they also have a background in turning crazy-on-paper ideas into film gold, having codirected 2012’s 21 Jump Street (and its sequel, currently in theaters). Given their track record, it was probably not too hard for them to line up the voice talent in their cast, including Chris Pratt, Elizabeth Banks, Will Ferrell, Morgan Freeman, Charlie Day, and Alison Brie.

If you ask just about any parent, he or she will tell you how well they’ve succeeded again. As a nonparent who isn’t forced to take kids to movies and therefore doesn’t have the equivalent of beer goggles when it comes to films that are primarily intended for children … I thought it was fine until the ending, which — no spoilers — kind of (totally) sells out the foundation of the story. It sure looks cute, though!

Wesley Morris: “I stopped laughing because after 20 minutes, I’d had enough. The conceit gets stale fast. If Michel Gondry’s all-Lego music video for the White Stripes’ ‘Fell in Love With a Girl’ had lasted 100 minutes, the tidal wave of joy you get from that clip would dissipate, and all you would be is wet.”

When Ernest & Celestine was nominated for Best Animated Feature at the 2014 Academy Awards, it had the bad luck of being overshadowed by the juggernaut that was/is Frozen. Now E&C is hitting VOD just in time for your kids to (maybe) finally be sick of Frozen … and its competition is The Lego Movie.

If you go by international critical response, though, it’s worth giving Ernest & Celestine a shot: It was nominated for dozens of awards for exceptional achievement in children’s films and/or animated features. And while The Lego Movie is certainly bombastic, E&C has quieter charms. Celestine is an orphan mouse being raised to start a career in dentistry, as all mice do. She is told lots of horror stories about the evil that bears do, but when she actually encounters one — Ernest — she discovers that those stories aren’t true, and the two become friends. Though the film is originally in French, you can rent a version dubbed with the voices of Paul Giamatti, Megan Mullally, Nick Offerman (also of The Lego Movie), and William H. Macy, among others.

If you’re ever going to be in Iceland, you will probably be advised to check out the Icelandic Phallological Museum, a.k.a. the Penis Museum, but having been there, I can tell you that it’s OK if you skip it. The place is tiny; the specimens are sometimes barely visible in their murky formaldehyde (or whatever); it doesn’t even have a gift shop, and you better believe I drove out of my way assuming I’d be able to get a penis fridge magnet to commemorate my visit; and I’m no Martha Stewart, but how about choosing one style of container and sticking with it? Anyway, now there’s even less reason for you to go: You can just watch this documentary instead.

The Final Member is partly a profile of Sigurður Hjartarson, the museum’s owner, and partly an attempt at maturity about the items he’s collected for exhibition. But it’s also about Hjartarson’s attempts to secure the donation of one mammalian phallic specimen he doesn’t, as yet, have on display: a human penis. Along comes Tom Mitchell, would-be donor, and then we get to learn his story, too. Turns out a guy who’s really into donating his penis for study — before he dies, maybe, even — is kind of a character.

Just in time for everyone to have gotten through the minefield of how to feel about Blue Jasmine while knowing about the allegations that Woody Allen abused his daughter, here comes your next cinema-related moral dilemma: Roman Polanski’s latest film.

Venus in Fur, on demand and in theaters the same day, is the filmmaker’s adaptation of David Ives’s acclaimed play of the same name. Writer-director Thomas (Mathieu Amalric) is working on casting his play, adapted from the NOVEL Venus in Furs, by the original masochist, Leopold von Sacher-Masoch. When harried actress Vanda (Emmanuelle Seigner) enters after auditions have closed, her method of convincing Thomas to cast her turns into a drama unto itself.

Post–Breaking Bad Aaron Paul may stoop to paycheck gigs like Need for Speed and that Xbox One ad; he’s a newlywed, and he and Mrs. Pinkman have to eat! But he does still do work that reminds us that Breaking Bad wasn’t a fluke.

In Hellion, which you can rent the same day it hits theaters, Paul plays Hollis, the widowed father of two young boys. While he distracts himself from his grief by working on his wife’s dream house 40 miles away from where he lives, he leaves the boys to their own devices, having no idea what kind of trouble a couple of sad, unsupervised kids can get up to.

Cameron From 'Halt & Catch Fire,' and the Legacy of Female Badasses in the '80s