Cameron From ‘Halt & Catch Fire,’ and the Legacy of Female Badasses in the ’80s The ’80s were a good time for fictional female badasses. As action became the decade’s defining genre, female characters appeared who reflected the ideals of action protagonists: cool under pressure, but deadly when provoked. The massive success ofAlien in 1979 broke the American taboo against female action heroes, and Ellen Ripley (Sigourney Weaver) set the template for the action heroines of the decade to come: capable, unemotional, intimidating, and androgynous. The world of Alien is unisex, and so was the developing vision of the future in the ’80s. Aliens introduced Private Vasquez (Jenette Goldstein), a Marine smart-gun operator whose butch look and badass demeanor were revolutionary for a mainstream action movie. 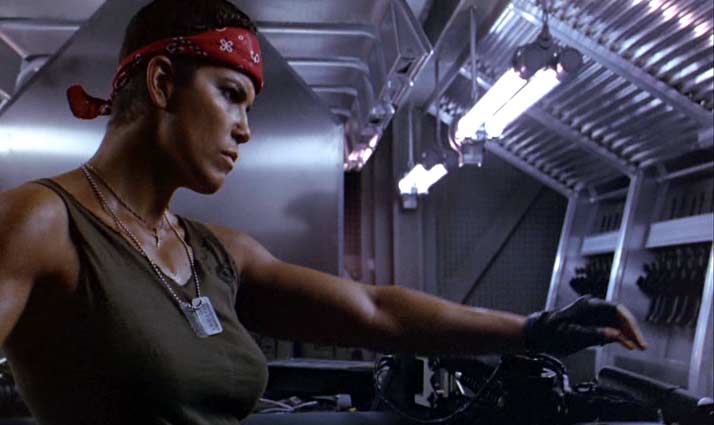 What differentiated these ’80s heroines from earlier action girl archetypes was that their power centered around their skill set, not their sexuality. Alien also established an accompanying trope of depicting these heroines going braless in tank tops, which both demonstrates their nontraditional femininity and provides an excuse to look at their tits. ’80s film provided us with Sarah Connor (Linda Hamilton) in The Terminator, Blade Runner’s evil replicant Pris, and the fame of Brigitte Nielsen. Martial arts stuntwomen Michelle Yeoh and Cynthia Rothrock found success in ’80s Hong Kong action movies like Yes, Madam (in which they costarred) before crossing over into American movies in the ’90s. Princess Leia got even cooler in the second two Star Wars movies. Female vigilante comic-book characters like Elektra, Katana, and Lady Deathstrike came to the fore. X-Men’s Storm even went through a punk phase. The final reveal of Metroid was that underneath the bulky exoskeleton, Samus is a girl. In William Gibson’s seminal cyberpunk novel Neuromancer, published in the sci-fi significant year of 1984, the cold, cynical mercenary cyborg character Molly Millions is referred to as a “razor girl.” 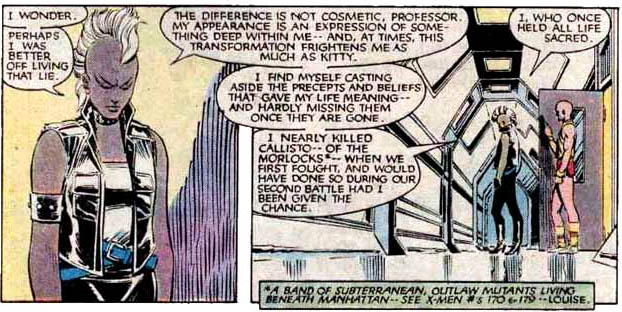 Cameron Howe, the punk coder from AMC’s ’80s-set Halt and Catch Fire, is a razor girl, too. Cameron (Mackenzie Davis) is a tomboyish woman in her early twenties with an insane natural aptitude for programming and an affinity for punk rock. (I love the corny punk stuff, because I am the kind of corny punk who recognizes the X-Ray Spex song Cameron is listening to — “Germ Free Adolescents” — and then spends too much time wondering whether it was era-accurate or too on the nose for demonstrating the character as a feminist punk, before realizing I was just so happy to see a feminist punk that I didn’t care. Anarchy in the AMC!) She rips off Galaga machines, works out complicated code on a mirror in lipstick, and gets a really bad unfilled Black Flag stick ‘n’ poke tattoo that inspires her to work out said complicated code. Cameron is androgynous; she wears fatigues, goes braless, and has a short blonde haircut that has been described variously as a Miley, a Claire Underwood, and a Mary Stuart Masterson in Some Kind of Wonderful, a.k.a. a “Watts.” It personally reminds me of The Legend of Billie Jean, a cult ’80s movie I like about a girl who escapes from getting raped, cuts her hair into a blonde Joan of Arc style, and becomes a folk hero among Texas teenagers. Cameron’s short haircut is utilitarian because everything about her is. Her air of hostility is just a defense against being fucked with on the street. 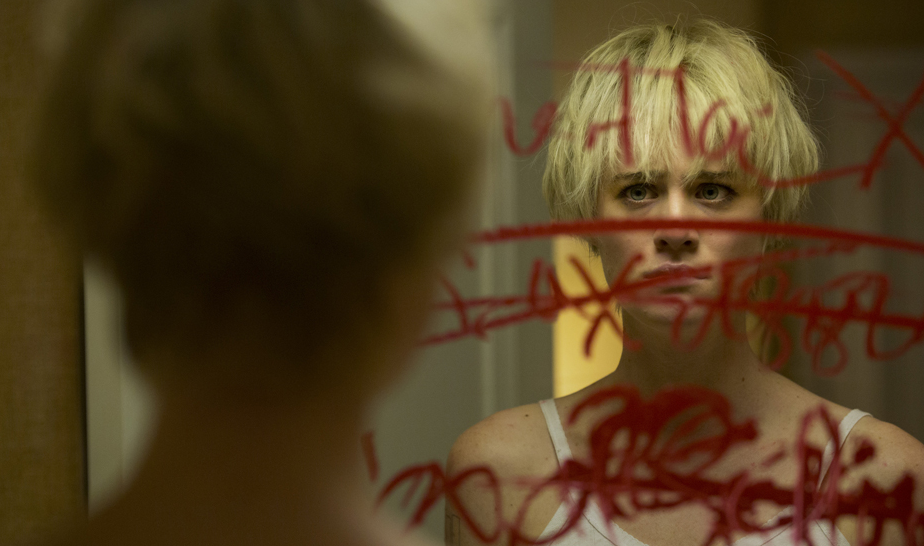 Although she wears a uniform of Army fatigues, Cameron is not especially violent. She is just very aggressive — about sex, music, and coding. Her punk androgyny is a sneer that says she’s not interested in being pleasing to the eyes of straight men, although she also happens to be naturally gorgeous and there is the requisite braless tank top scene. She is bad at being warm, which can unintentionally make her come off as rude. But she’s not depicted as being superior to Halt’s other major female character, Donna Clark (Kerry Bishé), the wife of Cameron’s coworker Gordon (Scoot McNairy). Donna is also an engineer, and her marital dynamic with her husband is fascinating, showing a plotline you don’t usually see on these kinds of prestige shows; this guy really respects his wife, especially her intelligence. Circuit-bending a Speak & Spell for her kids, Donna is not a passive or victimized wife. McNairy and Bishé, who also played a married couple of hostages in Argo, have an easy chemistry.

Cameron is a hybrid of the ’80s tough girl character and the ’90s “hacker girl” type who came after. She’s like The Girl With the Dragon Tattoo’s Lisbeth Salander, but without all the piercings and traumatic backstory. So far the show hasn’t explained Cameron’s toughness away as vulnerability, and I’m kind of hoping it won’t. Human emotions are not her forte. All she cares about is code. She is probably on the autism spectrum. She is also outrageously beautiful, but that’s just one more way in which she is terrifying to strangers. She’s a little bit superhuman maybe, in the way that Walter White was. She might be too good at stuff, but I don’t care. All I know is that I asked the universe for a cool female programmer character and Cameron Howe appeared. Maybe that’s manipulative, but it worked on me. 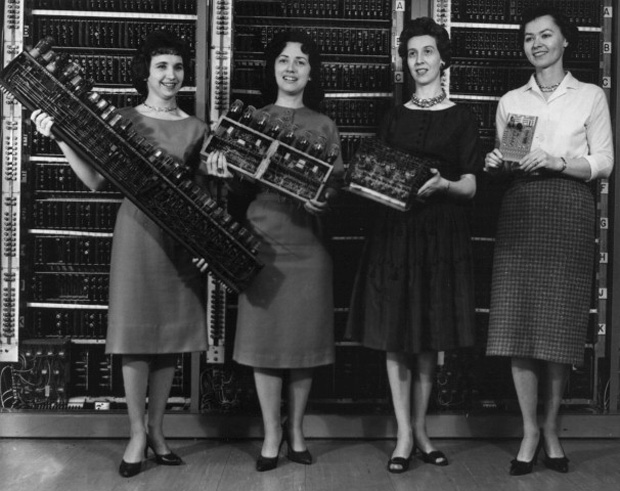 Halt’s race to invent a personal home computer might be patterned after the Commodore 64, which (spoiler alert) sold 17 million units and is in the Guinness Book of World Records as “the highest-selling single computer model of all time.” While a woman was not involved in making the real Commodore — it was built by a team of three men: Bob Russell, Bob Yannes, and David A. Ziembicki — lots of women have been instrumental in the history of computing. The 19th century English mathematician Ada Lovelace is widely seen as the first computer programmer for writing the first algorithim to be executed by a machine. The ENIAC, the first electronic general-purpose computer, was programmed by women. Programming was once seen as a woman’s job because it was assumed to be tedious. Pioneer mid-20th-century programmers like Adele Goldstine, Kathleen Booth, Evelyn Boyd Granville, Ida Rhodes, and “Mother of COBOL” Grace Hopper are real people. Cameron Howe is a fictitious, hyper-idealized version of a girl who is really exceptional with computers. I love her. I can’t help it.

Cameron Howe might be a projection of our desires, but it’s a great, amusing projection of a badass female programmer on a great, amusing show I have already grown to love. Halt and Catch Fire captures the obsessive isolating energy that is necessary for creating good work — the time spent in the basement. I was just really happy to see Cameron, a loner who is nobody’s girlfriend or wife, whose main interests in life are coding and music, because I haven’t really seen a character like her before. I would have almost shed a tear if I weren’t so tough and cool.

"I've been getting asked a lot...as an actor who's done film, film, film, film, 'Why'd you go to TV? Why'd you go do TV? And my answer has always been very quick, very simple, and the same: Quality." Matthew McConaughey really likes TV, and TV keeps giving him opportunities to make awards speeches. He'll see you at the Emmys, 'til then, just keep winnin'.