Video on Demand Report: Live Your Best Life and Rent ‘The Secret Life of Walter Mitty’ on VOD 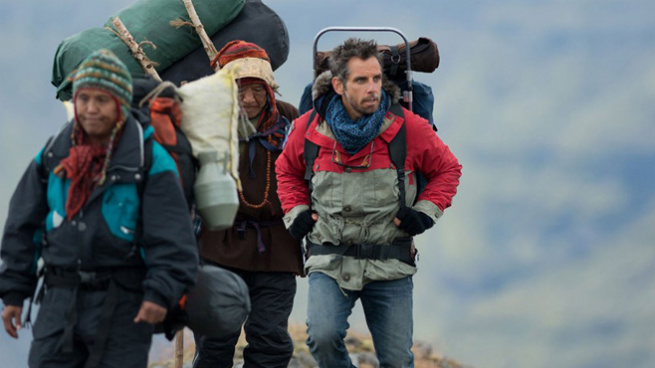 The Secret Life of Walter Mitty

Part of The Secret Life of Walter Mitty is romantic and sweet: Walter (Ben Stiller) manages photo negatives for Life and has an overwhelming crush on his colleague Cheryl (Kristen Wiig). He lives a fairly small life, but has a huge imagination that vaults him into fantasies that make him much more impressive to her. And when one of the magazine’s star photographers sends in a package missing a key negative for a photo he wants developed, Walter gets the chance to live the kind of adventure he’s only dreamed about when he has to try to track it down.

But then there are the aspects of the film that are kind of depressing. The reason there’s such urgency in Walter finding the negative is that it’s meant to be the cover of the magazine’s very last print issue. As print production winds down, the office is also going through downsizing. And Walter himself has had such an unremarkable existence that a rep for an online dating service can’t match him with anyone because he’s supplied so little information that’s of interest. This was a Christmas release? Because it sounds like a huge bummer.

That said: The film — which was also directed by Stiller, and based (loosely) on James Thurber’s book — was shot on location in New York and Iceland, both of which are extremely cinematic. The supporting cast also includes Adam Scott, Sean Penn, Shirley MacLaine, and Patton Oswalt. And even though the setup is a downer, things probably work out OK for our hero in the end.

13-year-old Henry Wheeler is trying his best to stay strong for his mother, Adele, in the wake of his father’s departure from the family — and things don’t get much easier when Henry manages to get Adele out shopping just in time for them to run into Frank, a blood-covered escaped con who basically takes them both hostage. At least, things are rough in this arrangement at first. Then Adele and Frank fall in love. As you do.

Directed by Jason Reitman from a screenplay he wrote (based on Joyce Maynard’s novel of the same title), Labor Day is a critically unloved melodrama that was dumped in January and probably won’t earn Kate Winslet another Oscar nomination for her performance as Adele.

Wesley Morris: “You can believe Reitman was drawn to the colors of Joyce Maynard’s 2009 novel, especially all the purple prose and the opportunity to toy with flashbacks. But the information in the flashbacks is so obvious that they turn the movie into camp. But Labor Day is too dreary for camp. It’s dramp.”

Days before Christmas, mopey teenager Langston (Jacob Latimore) is sent by his mother (Jennifer Hudson) from Baltimore to New York to stay with Cornell and Aretha (Forest Whitaker and Angela Bassett), his mother’s estranged parents. Langston bristles against Cornell’s strict rules, but as his grandparents’ church’s Christmas pageant approaches, the three get more comfortable with being a family. Also, the pageant is a musical, so if you think Langston’s mother, the former American Idol, might show up and sing … you’ve probably seen a movie before.

Kasi Lemmons (Eve’s Bayou) directed and also wrote the screenplay, which is based on Langston Hughes’s play. Mary J. Blige and Nas also appear to fill out its musical bona fides.

Wesley Morris: “There are family secrets here that you can see coming before the movie is even partway over. You don’t feel good about being a half-hour ahead of everyone. But the movie has the kind of earnest badness that starts to hook you.”

I know what you’re thinking: Did the Rock’s Hercules movie already hit and leave theaters without me even noticing somehow?! CALM DOWN, EVERYTHING’S FINE. Hercules, starring Dwayne Johnson, will hit theaters in July. But maybe you can prepare with this (lesser) offering.

In The Legend of Hercules, your title character is played by Kellan Lutz, of the Twilight movies, and the whole affair is directed by action veteran Renny Harlin. Hercules undergoes trials, he triumphs because he’s super-strong … and the animated Disney version might be more fun.

It feels like it’s been a while since a feature revolved around a disadvantaged young woman whose systematic degradation is being paraded in front of clucking audiences. So move over, Precious: It’s time for the world to meet Apple!

Gimme Shelter features former Disney teen star Vanessa Hudgens as Apple, daughter of a homeless single mother (Rosario Dawson). In desperation, Apple approaches the well-off father she barely knows (Brendan Fraser) for help with her terrible situation, but he kicks her out when she reveals that she’s pregnant and wants to keep the baby. Presumably things start looking up at some point, but … this is grim fare.

You know how sometimes when you watch an old Seinfeld, you realize that the entire story line couldn’t happen in a contemporary TV episode because the advent of cell phones would solve everyone’s problems? (The champion of this Seinfeld subgenre is the one where the four members of the gang keep missing each other at the movies.) Steven Brill, the writer of Walk of Shame, ambitiously decided to take on the challenge of making such a story line work in 2014.

Also in theaters today, Walk of Shame stars Elizabeth Banks (who also produced) as a reporter who goes out drinking and then, from there, home with James Marsden for a one-night stand, as literally any of us would do. In the morning, she gets a call to come in for the audition of a lifetime — the chance to be a TV news anchor — and in her haste gets locked out of his apartment without her phone and wallet. She can’t go back, and she only has eight hours to make it to the audition, and a modern comedy of errors ensues.

Dwight is a troubled young man getting by scrounging bottles and turning them in for cash; he can’t even be called a drifter because he lives in the shell of an old wrecked car. But when he learns that the man who murdered his parents is about to be released from prison, he identifies a clear goal and starts to pursue it with focus.

Blue Ruin is available on demand the same day as its theatrical release; in addition to its extraordinarily positive critical reception, it’s a Kickstarter-funded project that premiered at the Cannes Film Festival last year. Between this and the Veronica Mars movie, it’s been quite a year for crowd-funded film.

There are lots of ways for a man to react when he’s confronted with the end of his marriage. Maybe he’ll develop antisocial dependencies on booze, drugs, and sexually exploitative relationships; that’s par for the course, really. But if he’s the protagonist of a film adapted from an Irvine Welsh novel, he might do all of that plus start dressing like his wife in order to feel close to her.

On demand in advance of its theatrical release, Filth stars James McAvoy as Bruce, an Edinburgh cop whose desperation to move up in the ranks is hampered by his own behavior, which ranges from unpleasant to actually criminal. Also getting dragged down with him are Ray Donovan’s Eddie Marsan, Downton Abbey’s Joanne Froggatt, Turn’s Jamie Bell, Agents of S.H.I.E.L.D.’s Iain De Caestecker, and everything’s Jim Broadbent.

Of course it’s a good idea for one to go into a film with an open mind and an unprejudiced heart. But when the “Production” section on a movie’s Wikipedia page is approximately 15 times as long as its synopsis, there may be cause for alarm.

Gambit is available on demand the same day as its theatrical release … technically. The film actually already came out in Great Britain in November 2012, but I guess its awesomeness has been fermenting since then while it matured into a feature good enough for American audiences. Has it been long enough for this remake of the 1966 art con feature, in which Michael Caine and Shirley MacLaine have been replaced by Colin Firth and … Cameron Diaz? Maybe not.

'Me. I Am Mariah ... The Elusive Chanteuse': Mariah Carey's 14th Album Isn't a Secret Anymore

The Definitive, Subjective Ranking of Every Single Episode of ‘Louie’