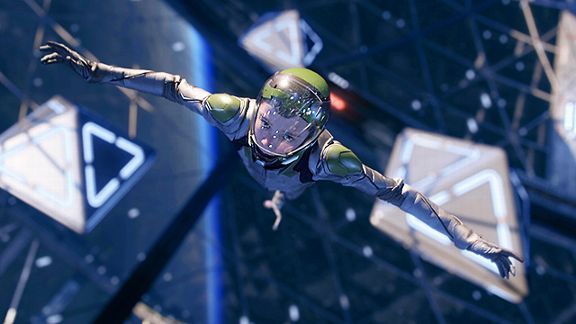 In the 22nd century, humans are vulnerable to attack by an alien race known as the Formics. Fortunately, Colonel Graff (Harrison Ford) and Major Anderson (Viola Davis) of the Battle School are always on the hunt for child recruits they can train to fight back. Asa Butterfield of Hugo plays the titular Ender, who seems destined to lead the anti-Formic counterattack. His training at the Battle School begins with simulation games that soon become real, and really intense.

The film’s release was shadowed by controversy surrounding Orson Scott Card, the author of the novel the film was based on and an outspoken opponent of gay marriage. However, Roberto Orci, a Bad Robot mainstay and one of the film’s producers, promised at the time that he didn’t know about Card’s views when he started on the project, so probably even if there was any homophobic subtext in the book, it didn’t make it into the movie? Ultimately, it’s Harrison Ford back in space.

Wesley Morris: “This movie gets at the appeal of Card’s novels, which flatters kids who feel smarter than everyone else. But Hood doesn’t bring out the thrill of that sense of superiority. He buries it in plot points and lifeless academy sequences.”

Many years after a group of college friends and their significant others got together for a wedding in The Best Man, this sequel catches back up with the characters for a Christmastime reunion to see how they’re coping with marriage and parenthood.

I assume the reason it took 14 years for the sequel to come together is that its cast has been busy getting nominated for Oscars (Terrence Howard), starring on Lost (Harold Perrineau), and dazzling America with his smile (Taye Diggs).

Wesley Morris: “It’s probably too much: the throwaway lines, the priceless reaction shots, the weeping. You leave emotionally exhausted, but there’s a lot of care in this movie.”

The Jane Austen cottage industry (or should I say “country manor industry”) has gotten so big over the past 15 years or so that there’s actually not much Austen left to mine. In the spirit of Austen-adjacent miniseries Lost in Austen (in which a contemporary woman wakes up in Pride and Prejudice), here’s Austenland — evocative of the writer, but light on the original source material.

Keri Russell plays Jane, an American woman obsessed with Colin Firth’s Darcy from the ’90s-era Pride and Prejudice miniseries. A vacation spent at a Jane Austen theme park is supposed to help her find her true love, but I bet things don’t turn out precisely as she had hoped!

I know it’s hard to imagine that Oprah Winfrey’s incisive interview with Lance Armstrong may have left some questions about his controversial career unanswered, and yet here we are.

Director Alex Gibney — who won an Oscar for his 2007 documentary Taxi to the Dark Side — started out covering Armstrong’s 2009 comeback after a four-year hiatus from competitive cycling, but then … things took a turn.

Knights of Badassdom stars a who’s who of TV’s sci-fi/fantasy genre shows — Peter Dinklage of Game of Thrones, Ryan Kwanten of True Blood, Summer Glau of Firefly and the short-lived Terminator TV series. (I guess Tricia Helfer of Battlestar Galactica was busy that week.)

This all-sort-of-star cast brings to life a story about a group of friends whose LARPing accidentally leads to the summoning of a succubus, so if you enjoyed the LARP … sorry, “LAIRE” story line of Role Models but wish it had been even less realistic, this is probably the movie for you.