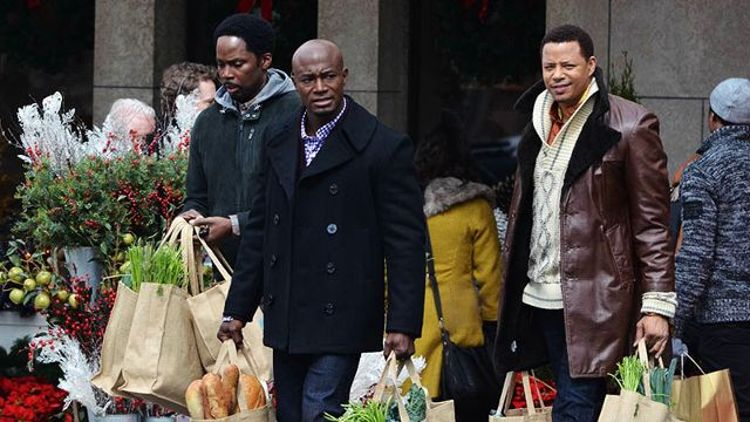 The Best Man Holiday, directed by Malcolm D. Lee
What kind of title is The Best Man Holiday? This isn’t a question I’m asking. It’s been asked of me. Some of the askers are looking for a hyphen or a comma or a colon. They aren’t grammar police. They’re just confused. If you don’t know this movie is a follow-up to The Best Man, a nine-way romantic comedy that was a minor hit 14 years ago, it’s confusing. All the punctuation money was spent plastering America’s bus stops, subway stations, and billboards with posters of the cast looking sexy with red scarves. I’ve seen people stand around trying to figure out what’s happening in these ads. Some of these people had already seen the first movie.

Back in 1999, four college friends got together for one guy’s wedding. They brought women. And sparks flew. Harper (Taye Diggs) had written a gossipy roman à clef about his friends’ sex lives, and the weekend revolved around who in the group has read it. It was a good screwball premise that had funk and wit. But it was Malcolm D. Lee’s first movie as a writer-director and you could tell. He seemed nervous about what it meant for a movie to showcase four black men sitting around talking about sex. The women were combustible, borderline stereotypes. But it basically worked. You liked these people because they seemed like real middle-class human beings — even Candace, the stripper Regina Hall played, and Shelby, the snobby gorgon who should have made Melissa De Sousa more famous.

A decade and a half later, you can sense that Lee had been thinking about what more he could do with these characters. They’re in their early forties and now very successful. Getting them back together to compare notes and rehash the past works because there are both thematic opportunities and actual cultural points to make. Harper just lost his job at NYU and needs a new best seller. His agent recommends a book on his estranged, superstar football player and best friend Lance (Morris Chestnut). He’s too proud to ask outright. So when Lance’s wife, Mia (Monica Calhoun), summons the gang to their house for Christmas, he just starts asking leading questions and sneaking answers into his notebook.

Lee packs about a dozen movies into two hours. Harper brings his wife, Robyn (Sanaa Lathan), who’s got a chip on her shoulder about being very pregnant while surrounded by one of Harper’s flings — Mia — and his closest lady friend, Jordan (Nia Long), a cable executive who might be too careerist to fully commit to her white, well-heeled new man (Eddie Cibrian). There’s a dirty video from Candace’s past that makes its way around the house until it gets to Shelby, who can’t stand that Candace’s professorial husband, Julian (Harold Perrineau), didn’t marry her instead. But Shelby might be unmarriageable. She’s still a trifling egomaniac, now with a Beyonceéload of blonde extensions.

Now an entire wing of the entertainment industry is devoted to the Shelbys of the world. The movie makes her a very rich, very famous Real Housewife. Terrence Howard was the best thing about the first film — all the sexiness and danger came from him. He’s back as Quentin, Shelby’s slutty male counterpart. The movie’s too good for him to outright steal, but he adds the right amount of nasty seasoning. He and De Sousa are what old Hollywood screwballs would use as the irreverent undercard, the pair that has all the deviousness and all the sex that’s too sordid for the leads. When they get together it’s either Noel Coward or Mortal Kombat.

When Tyler Perry moved into his haute-bourgie phase with the Why Did I Get Married movies, it was fair to accuse him of wanting to replicate the smoothness of The Best Man. But that comfort never came naturally to him. Success in a Perry movie is to be suffered for and suffered from. God in his movies is slightly vengeful. Lee, on the other hand, is Spike’s nephew. A black middle- or upper-middle class isn’t a moral test for him. It’s a matter of fact. These are characters who want more success. There’s no self-torture in that ambition. And God is on their side.

Best Man Holiday is as much a mega-drama as one of Perry’s productions. Someone is deathly ill. A child is born in an SUV. There’s an expletive-laced, screaming brawl between two women that is the rawest fight I’ve seen outside of a schoolyard or a UFC cage. The men dress in sequins and perform a New Edition gem. It’s probably too much: the throwaway lines, the priceless reaction shots, the weeping. You leave emotionally exhausted, but there’s a lot of care in this movie. Lee knows how funny it is to see Howard in a Santa Claus suit, so he keeps him in one for about three scenes. He lets Diggs win more laughs with uptight guilty “ha ha ha ha” than even George Clooney would get.

It’s understandable why Lee wanted to come back to this movie. It has come to stand as a breakthrough. His first installment arrived after black moviemaking’s independent phase in the early 1990s and in middle of the ghetto-comedy period. (Now most of the cast are successes, although Long, Lathan, and Hall can never be successful enough for me.) A movie like this represents a viable way up from slaves and servants.

Originally, Lee was trying suggest a male answer to Terry McMillan’s sister-to-sister fantasies. He wanted to live in the real world and in Hollywood. He didn’t want to be self-conscious or pretentious about it either. When Candace sees how big Robyn has gotten, she’s blunt: “Your titties are huge!” Perry’s movies have a lot of church. But it’s a line like that makes you say, “Amen.” 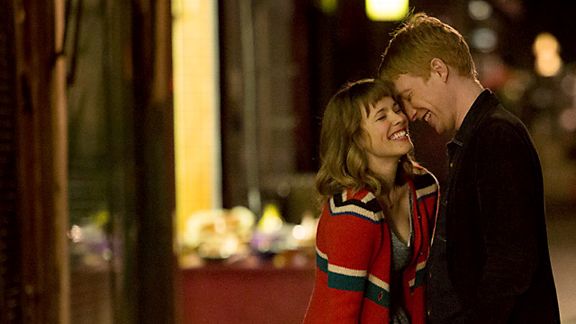 About Time, directed by Richard Curtis

There’s a face some people make when they drink something warm if that something happens to be served in a giant mug and the mug contains whipped cream or foam and the foam winds up on their face. It’s part “aaah,” part “mmmm,” part “awww.” It’s part “No one has ever enjoyed a mug of coffee or cocoa as much I am right now.” The satisfaction of drinking this way outweighs the ridiculousness and potential embarrassment of how the drinking makes them look. This, to them, is heaven, and the foam is a blessed blemish of bliss.

This is the face people make at Richard Curtis movies. I know because I’ve turned around to look. Curtis wrote Four Weddings and a Funeral and Notting Hill and adapted both Bridget Jones movies. The first movie he directed, Love Actually, is The Towering Inferno of romantic comedy: more than a dozen stars trying to put out a fire. But with Curtis, the fire usually burns in the chest. He concocts movies of intense charm and wit, then drenches them in cute sentimentality, often by making it rain or having someone die. Globally, Love Actually grossed close to a quarter-billion dollars. It’s mentioned, without mockery, in a DirecTV ad that plays during football games. I know someone who has seen it 20 times, and that someone is neither a woman nor her gay best friend. Dudes makes foam face, too!

Curtis is back climbing the North American box office with About Time, another rain-soaked, candlelit table for 12, complete with a death toll. He’s added the wrinkle of science fiction — his protagonist, a skinny young redheaded lawyer named Tim Lake (Domhnall Gleeson), can time-travel. It’s a gift put to mundane, personal, private (and pedestrian) use — at parties and art shows, once to save a sibling (Lydia Wilson) from herself. But it’s an imperfect gift. One night he meets Mary, his dream woman, a bookish North American played at the height of adult purity by Rachel McAdams. But when he time-shifts to another portion of the evening to save the play of his bitter bitch of a friend (Tom Hollander), it means never meeting Mary, and having to win her again.

This movie combines Curtis’s love of science fiction with his loves of slapstick (he’s written for Dr. Who and Rowan Atkinson) and actual love. The combination isn’t lethal. It’s Groundhog Day without the certitude. What makes Curtis insufferable is that he doesn’t know when to dam off his cleverness. His movies always turn into the bookshelf that falls on poor Leonard Bast in Howards End. (Curtis is the furniture guy who ignores the wall supports. It’s always safety last with him.) With no shame, this movie merges the time-travel and death in order to wring tears from people who need movies to reduce them to tears and snot.

The years pass, the cultural importance of Kate Moss absurdly comes up (“Do you believe the magic of her lies in her history?” asks the future editor of major novelists), and the manuscript of a Very Important Writer is put in a shredder. The rain sequence here occurs during the exchange of vows, and it’s inane. But Curtis turns it into a gorgeous epic of slow-motion disaster. It’s The Poseidon Adventure of weddings. McAdams gets luminously wet. Otherwise, she doesn’t have enough to do. As Tim’s tony parents, Bill Nighy and Lindsay Duncan are droll and toast-dry. But the film is entirely Gleeson’s. The son of the robust Irish actor Brendan Gleeson, he’s a ladle of a man, with a great, big smile and oft-furrowed brow. His gawky adoration portends a new era of movie men. If he catches on, it means audiences prefer a star who’ll dote, serve, and protect. They’ll want a perfect man who looks less than perfect — a super-husband, super-father, and super-friend. Even in a work of science fiction like this, Gleeson seems beyond real. All those foam-faces being made in the dark? They’re for him.