Video on Demand Report: Good News! You Don’t Have to Go to the Theater to See ‘Nymphomaniac’ 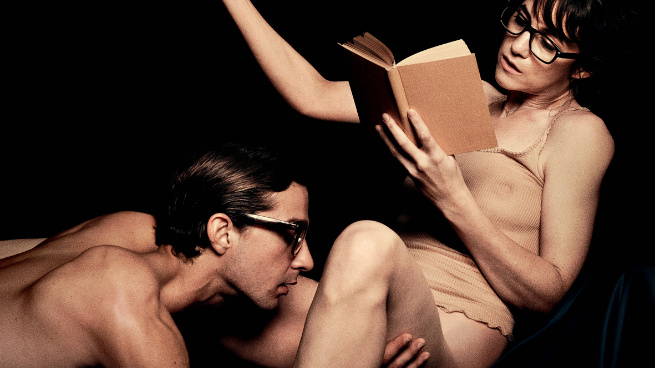 You’ve seen the red-carpet photos of Shia LaBeouf wearing a bag on his head that reads “I AM NOT FAMOUS ANYMORE.” Now see the movie he was (not very effectively) promoting!

Available on demand in advance of its American theatrical release, Nymphomaniac is the latest from Danish director Lars von Trier; it reteams him with frequent collaborator Stellan Skarsgård, who plays Seligman, a man who happens upon Joe (Charlotte Gainsbourg) badly beaten in an alley. He takes her home to care for her wounds, and in their next few hours together, she tells him, in great detail, all about her sexual life from its beginning to her current age of 50; LaBeouf plays one of her partners.

Nymphomaniac finds von Trier returning to something more like Antichrist after the moody apocalyptic drama Melancholia; and if Blue Is the Warmest Color put you in the mood for very explicit sex scenes, you’re welcome.

In Panem, a year has passed since the last Hunger Games, which ended rather unconventionally in a tie between District 12’s Katniss Everdeen (Jennifer Lawrence) and Peeta Mellark (Josh Hutcherson). And with Katniss having become a flashpoint for a slowly percolating revolution against the country’s corrupt government, something radical must take place: a Quarter Quell, in which the normal Reaping for contestants is replaced by a kind of All-Star season, featuring survivor-winners from previous years.

This second of an eventual four Hunger Games movies suffers from the same issue a lot of second-in-a-trilogy stories do (and yes, I know I said “four,” but there are only three books, with the last story being cynically broken into two films like all these things apparently have to be, post–Harry Potter): It … kind of leaves off in the middle? But producers evidently had a lot of fun casting the previous Tributes — Jeffrey Wright and Amanda Plummer are particularly unexpected yet great — and Philip Seymour Hoffman makes one of his final film performances as the ruthless new game maker.

Wesley Morris: “The key to [Jennifer Lawrence’s] stardom is the reckless bluntness that was always Julia Roberts’s secret weapon. So a movie about a woman whose directness is being suppressed doesn’t cry out for Lawrence. But she wasn’t a star when she took this part, she was lucky.”

Fans of Park Chan-wook’s Vengeance trilogy were horrified to learn that Spike Lee had the temerity to direct an American remake of Oldboy, and apparently they, along with the rest of the moviegoing audience, stayed away, making this one of the biggest flops of Lee’s career.

Without giving too much away (because there is a twist, and not a small one): Josh Brolin plays Joe, who’s framed for his wife’s rape and murder and loses custody of his daughter while he’s incarcerated. Once he’s released from prison, he realizes his enemies are still keeping him from being completely free, but even he can’t fathom how far they will go to ruin what’s left of his life.

Wesley Morris: “Lee hasn’t been shy in complaining about Quentin Tarantino’s easy comfort with blackness, with his audaciously vulgar use of Samuel L. Jackson in his movies. Jackson and Lee haven’t done a movie since Jungle Fever in 1991. Oldboy is a thankless reunion.”

Originally titled The Philosophers, After the Dark posits a complex philosophical question: Who is best suited to thrive in and after an apocalypse? How? Why? And who gets to decide who lives or dies?

James D’Arcy plays Zimit, a high school philosophy instructor who poses a disaster scenario to his teen students — a who’s who of young stars including Once Upon a Time in Wonderland’s Sophie Lowe, Harry Potter’s Bonnie Wright, and The Fosters’ Maia Mitchell — and assigns them identities and tasks, inviting them to argue for their admission into a shelter. But Zimit has his own agenda and prejudices, and none of the students’ problem-solving decisions yields quite the right answer … or maybe there isn’t one.

If you were asked to make a list of formerly respectable stars who, in recent years, have peed on their legacies with movies so forgettable you might have wondered if they had gambling debts that urgently needed paying, Robert “The Adventures of Rocky and Bullwinkle” De Niro and John “1408” Cusack would probably be on it somewhere. And now they’ve joined forces in a rote and joyless outing!

Available on demand the same day as its theatrical release, The Bag Man revolves around a hit man, a possible demon, and the titular MacGuffin. De Niro apparently filmed it before Silver Linings Playbook came out, but I guess he didn’t make enough money from that and American Hustle to buy up all the copies and prevent this thing from getting released.

Filed Under: After The Dark, Nymphomaniac, Oldboy, The Bag Man, The Hunger Games: Catching Fire, VOD

More After The Dark

See all After The Dark

'Parenthood' Cry of the Week: Where Have All the Tears Gone?