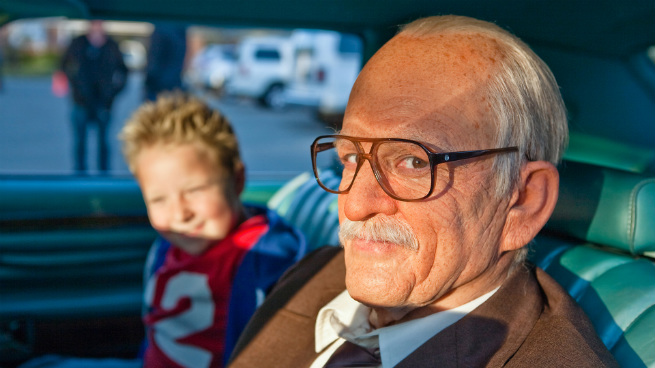 Oscar completists can thank VOD for the help in checking another title off their lists this week: Here’s Jackass Presents: Bad Grandpa, Oscar nominee for Best Makeup and Hairstyling! I doubt that its opponents in the category, Dallas Buyers Club and The Lone Ranger, required their makeup artists to spend as much time as Bad Grandpa in crafting just the right prosthetic geriatric penis — but then again, I haven’t seen The Lone Ranger.

The title calls out the Jackass brand, but Bad Grandpa is something of a departure. For one thing, it only features two pranksters: Irving, played by Jackass star Johnny Knoxville, and his grandson, Billy (actual pre-teen Jackson Nicoll). For another, its series of pranks are arranged in a loosely narrative story, as Irving transports Billy across the country to live with his (deadbeat) father and gets into nutty situations along the way. And though more than one of these involves the exposure of Irving’s genitals, the film has just enough decorum not to have Irving share those scenes with Billy, though I imagine working on the film was quite an education for Nicoll just the same.

Even though there’s a wide range of pranks, from the illicit transport of a corpse to the malfunction of an adjustable bed to a disastrous funeral and so on, Bad Grandpa, like Betty White’s Off Their Rockers, is kind of a one-note premise, namely “Look at the crazy things this old person is doing!” Granted, Bad Grandpa pushes the notion to more dangerous lengths by having a young(ish) person play the old person and thus subject his seemingly frail body to more abuse, but it still gets kind of repetitive, and it’s just close enough to the first three Jackass movies to make you miss all the other guys getting things chucked or shot or jammed into their nuts, too.

Wesley Morris: “The problem with the film, which was shot, in part, with hidden cameras, is that Irv and Billy flee the scene before any consequences can be suffered. The movie is operating in the spirit of Sacha Baron Cohen’s road farces, but those movies were prepared to stick around for the post-prank awkwardness because that was often where the good comedy was.”

Julia Louis-Dreyfus plays Eva, who meets Albert (James Gandolfini, in one of his last film roles) at a party and dates him despite not being exactly what she’s looking for physically. Meanwhile, she’s getting friendly with a new massage client (Keener), who shares her grievances about her ex-husband. Before long, these two seemingly unrelated plotlines cross over, with romantically disastrous results. It’s a carefully observed, quietly devastating film that also manages to be funny.

Wesley Morris: “Enough Said uses [its leads] smartly. It thrives on the brilliance of Louis-Dreyfus’s passive-aggressive approach to comedy and the gentle solemnity that Gandolfini exudes. As a couple they’re so physically and temperamentally incongruous that the pairing makes sense despite itself.”

The greatest rivalry in 1970s car racing is between James Hunt (Chris Hemsworth) and Niki Lauda (Daniel Brühl); while Hunt is a Tom Jones–like bon vivant, Lauda is precise and disciplined. The two keep facing off as they advance through the sport … until Lauda suffers — and survives — a horrible crash. How will this change their relationship?

If American Hustle put you in the mood for a true story set in the ’70s, maybe Rush is right for you.

Wesley Morris: “Morgan’s script wonders aloud about professionalism versus bravado; pragmatism versus showmanship. It convincingly asks what winning entitles a champion to. To that end, Rush might be an inapt title. They could’ve just called the movie More.”

Las Vegas is the capital of hedonism, where the laws of decency don’t apply, or so we have been made to understand from the city’s tourism campaigns. But those ads tend to star young people. What might happen if the four thrill seekers descending on the city for a bachelor party are SUPER-DUPER-OLD?!

Michael Douglas is the guy getting married to a much younger woman; Robert De Niro, Morgan Freeman, and Kevin Kline are his buddies. And no, De Niro doesn’t play his character from another old-guy-doing-young-things comedy, Grudge Match, but I bet he has a lot of the same lines.

Wesley Morris: “[Director Jon Turteltaub is] a specialist in the sort of movies that are more easy than they are good — easy to watch, easy to skip.”

Cloudy With a Chance of Meatballs 2

The first Cloudy With a Chance of Meatballs, while charming and funny on its own merits, was also a secret sideways sequel to the late, extremely lamented animated series Clone High (seriously: Get it, love it, thank me later), since both came to us from writer-directors Phil Lord and Chris Miller. Since the two have gone on to helm the 21 Jump Street movie and its forthcoming sequel, they’ve been busted down to a “Story By” credit, but the Clone High spirit remains, thank god.

Picking up where the first film left off, scientist Flint Lockwood (voice of Bill Hader) is recruited to work at the Apple-esque Live Corp, while Live’s resident genius Chester V (Will Forte) installs his own staffers to clean up the disaster area Swallow Falls has become. Except, Chester V has his own, non-philanthropic reasons for locating an operation on Swallow Falls, as Flint and his friends discover when they secretly return: The food has evolved into animal/food hybrids! And even if the movie wasn’t funny and sweet (which it is!), the adorable design of the foodimals would be reason enough to see it. Seriously, I want the strawberry as a pet. Make it happen, science.

The microtrend of sexless-marriage entertainment kicked off by Hope Springs continues with Afternoon Delight. Kathryn Hahn plays an unhappily married woman who impetuously visits a strip club, and even more impetuously hires one of the dancers (Juno Temple) to come work for her as a live-in nanny.

Afternoon Delight is the feature directing debut of Jill Soloway, best known as a writer on Six Feet Under and Grey’s Anatomy, among others, and it won her a directing prize at last year’s Sundance Festival. And yes, full disclosure, it does star How I Met Your Mother’s resident drip, Josh “Ted” Radnor. But if anyone can cancel out his suckiness, Kathryn Hahn can.