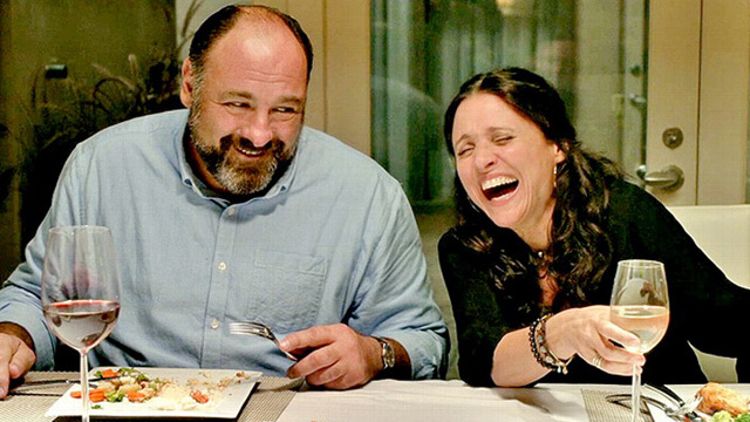 In Enough Said, Julia Louis-Dreyfus plays Eva, a long-divorced Los Angeles masseuse who starts dating a dour television archivist named Albert (James Gandolfini). She’s not enthusiastic not because he’s fat but, oddly, because his name is Albert (no one calls him “Al”). The movie was written and directed by Nicole Holofcener, who is a master of throwaway truths. When Eva tells a new client that she finds Albert intriguing, she includes a parenthetical: “to me.” Unfortunately, that client, Marianne, happens to be Albert’s ex-wife, who is played by Catherine Keener, whose career owes everything to dissatisfaction. Holofcener builds her entire movie on that coincidence.

Eva becomes Marianne’s confidante, and Albert is the diminished subject of much of what she confides. Soon Eva starts to see in Albert the same annoyances that used to bother Marianne. She starts to treat him similarly, too. This isn’t a dumb gimmick. But it’s a gimmick nonetheless, and from a woman whose intricate social comedies — Walking and Talking, Lovely & Amazing, Friends With Money, Please Give — have been gimmick-free. This is the first of Holofcener’s movies that can be described in a sentence.

The line is fine between a director making what she does look easy and making what she does seem facile. This is a facile movie. But Holofcener isn’t a facile writer. She’s become a shrewd social satirist of white, upper-middle-class life in New York and Los Angeles. Her movies are a cocktail of her American forebears — Paul Mazursky, Elaine May, Woody Allen; a dash of Jane Austen. But because that kind of incisive, human-scale Hollywood moviemaking has gone almost entirely to television now, her point of view feels exhilaratingly foreign at feature-length. Her concerns about social etiquette and familial ambivalence are laced with observations on the absurdity of modernity.

Marianne, for instance, is a no-shoes-in-the-house, earth-mother type. She gives Eva a bunch of chervil, and Eva tells her best friend (Toni Collette), via a video chat, that she doesn’t even know what chervil is. But something’s always a little bit off here. A video chat is the sort of device someone in a Holofcener film would mock, and Collette’s character lives in the area. (The person most likely to do the mocking would be Keener, who’s done the equivalent of squirting lemon in all of Holofcener’s films. She’s essentially sidelined here, while, for the first time, Holofcener makes lemonade.)

The movie’s audience-friendliness is likely to make it her biggest hit. The plot is like a couple of episodes of decent boutique television — and none from the series Holofcener herself has directed (Six Feet Under, Sex and the City, Enlightened, Parks and Recreation). The movie is breezy and uncharacteristically smooth. The cringe-worthy racial and class encounters of her previous movies are dulled this time (her L.A. films aren’t as pungent as the ones set in New York). The movie is engineered for a success that I don’t begrudge her; so-so Holofcener beats a lot of what’s at the movies and on TV right now. But the other medium is clearly on her mind here: Albert and Eva share a kiss standing in the stacks of his television library. The difference in their body types has been deemed the sitcom ideal since The Honeymooners. And her two stars are most famous for their work on landmark TV. (Louis-Dreyfus just won her fourth Emmy on Sunday.)

To that end, Enough Said uses these two smartly. It thrives on the brilliance of Louis-Dreyfus’s passive-aggressive approach to comedy and the gentle solemnity that Gandolfini exudes. As a couple they’re so physically and temperamentally incongruous that the pairing makes sense despite itself. She doesn’t have his deep emotional reserves. She embodies the glibness that characterizes the entire film, and yet her energy is seductive. Even when she’s knitting in a dress shop, she seems like the kind of fun Albert needs. Gandolfini acts with achy, alluring, masculine understatement. If Albert wants love, he can’t change what a schlub he is in order to attain it. It’s endearing how comfortable with himself he is. When Eva speaks about him in disclaimers, you understand why. But she doesn’t need them. We get it.

Relativity Media is selling Don Jon during televised wrestling and football. Basically, they’re selling one scene. It’s the one in which a horned-up Joseph Gordon-Levitt stands with Scarlett Johansson at her apartment door, desperate to be let inside. She has made herself as ripe and blue-balling as she’s ever been, telling him, more or less, that they should wait. It’ll be hotter that way. Really, she purrs this, and does it in a Jersey accent (they filmed in Hackensack). It’s a hot, funny scene. Singling it out is both smart (they’ll get all the bros!) and subversive. The bros will show up for Jersey Shore only to realize they’re in the presence of something far more sophisticated: a dissection of sex and love and masculinity.

Don Jon‘s intelligence, wisdom, and sensuality come as a complete shock. I wrote about this movie last January when it was called Don Jon’s Addiction, and some of the initial shock comes from Gordon-Levitt being the film’s writer and director. Male primitiveness isn’t a direction his acting goes. He’s been a kind-of-tough guy for Christopher Nolan and Rian Johnson, and he seems pre-wounded in almost everything. A lot of actors who direct their own performances seem to shut down a little to romanticize themselves, but I don’t think Gordon-Levitt thinks of himself as a star. He’s not selling himself. He’s exploring an idea.

Gordon-Levitt keeps pushing the movie further and deeper until it achieves astonishing emotional complexity — and not astonishing because of who made it (although there is that). It’s that America is suffering a man crisis (we’re running out of good, manly ones!) and Don Jon acknowledges and addresses male infantilization and misogyny without congratulating itself for that. The movie is an argument for how we got a particular kind of misogynist savage (for once, it’s not mom; it’s Tony Danza) and how it’s not the expected conjugal domestication that tames him, it’s vulnerability. This is a sexy movie about love and how to make it. (The simple adjustment of one character’s hair is one of the most powerful romantic gestures I’ve seen in a movie. It’s also hot.)

This is as much a film about women’s issues as it is men’s. And it’s possible that certain bros who show up for Gordon-Levitt’s tutorial will learn something about sharing and self-examination. It’s also possible that from all this truth and tenderness they’ll extract a ploy to get laid. Either way, the movie is a triumph.

Thanks for Sharing, directed by Stuart Blumberg

Of course, Jon’s porn addiction doesn’t seem like much of an addiction. If he white-knuckles his way to sobriety, there’s a lot of tape on his knuckles. But were he to quit the accepted way, he might have wound up in one of the group sessions in Thanks for Sharing. This is a romantic dramedy about the day-to-day lives of sex addicts, and if there’s ambition here, it comes from turning disturbing material cute. For an hour or so, you don’t mind. The movie focuses on three New Yorkers, played by Tim Robbins, Mark Ruffalo, and Josh Gad. Each man is at a different stage of recovery (Robbins sponsors Ruffalo; Ruffalo sponsors Gad), and the suspense is generated by whether they’ll be able to stay on the wagon.

Ruffalo starts seeing Gwyneth Paltrow, a breast cancer survivor who has a no-addicts policy. Robbins and his wife (Joely Richardson) are coping with the return of their addict son (Patrick Fugit). And Gad happens to have mommy issues. The film bops along, manufacturing scenarios that come to an automatic head. Stuart Blumberg directed and co-wrote this movie (he also co-wrote The Kids Are Alright), and you get the sense that he was taken with how addicts talk among themselves. The group meetings are always the strongest scenes in the film; most of the other dialogue is bad banter.

Eventually, the weak comedy dissipates and the film turns dark, and you realize the early scenes are actually insufferable. They seem falsely happy. Even though that transition doesn’t improve the writing (is everyone really threatening to fall off the wagon at the same time?), it does give every performance — including a good, loose one by Alecia Moore, a.k.a. Pink — somewhere honest to go. Fugit is especially ferocious with a part that seemed like a device. The candor in this film has such a serious kick that you don’t know why Blumberg wastes so much time trying to get us to laugh at it. It’s not funny.