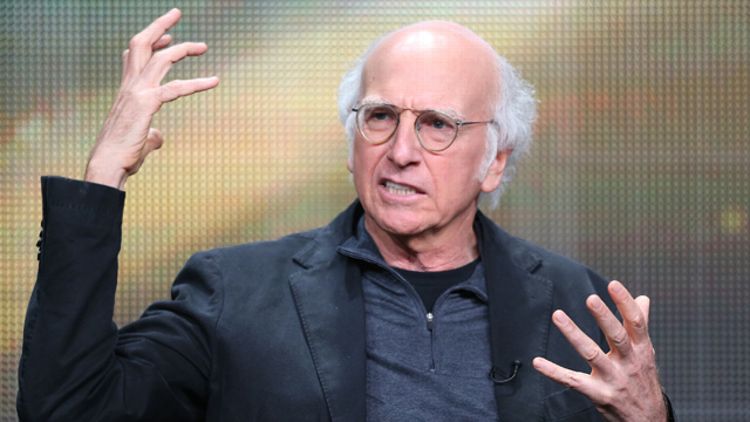 I’m not attending the Television Critics Association press tour this year, meaning I’ll have to get my room temperature guacamole and endless cups of tepid coffee elsewhere. But the tour — in which TV critics are locked inside a Wi-Fi-enabled hotel ballroom for two weeks while network stars and brass are paraded before them with all the grace of a police lineup — must go on. (Alan Sepinwall has a great guide to what it all means here.) Yesterday’s session featured HBO, and while it may have lacked the he-said, they-said drama of last year’s Sorkinpocalypse, much news was indeed broken. Or at least lightly dented. And since the apparent highlight of the afternoon was a long and kvetchy interaction with Larry David, let’s rank said news on a very Curb Your Enthusiasm scale of “Good” to “Pretty pretty pretty pretty good!”

David was on hand to promote/discuss/disparage Clear History, his new HBO original film debuting August 10. History, directed by Greg Mottola (Superbad) and filmed in the same largely improvisational method as Curb, features a radically hirsute David as a schlemiel who invents an electric car, then gets cheated out of the profits by his boss, played by Jon Hamm. The rest of the cast is filled out with a murderers’ row of funny, including Danny McBride, Bill Hader, Michael Keaton, Amy Ryan, JB Smoove, and David favorite Philip Baker Hall. (Liev Schreiber is also involved, but he is barred from promotional materials because he’s starring in Showtime’s Ray Donovan and because billion-dollar cable networks are 12 years old.) Screeners for this just arrived, so I can’t speak to the movie’s actual quality, but I’m fairly convinced the only negative thing about Clear History will be that its existence delays another season of Curb Your Enthusiasm (last broadcast in 2011) by at least another year. “I am lazy! Lazy! Who wants to do that?” David reportedly said when asked about a potential new season of Brentwood-based foibles. But at least he said it in his best Larry David voice.

The swords and savagery epic is in ascendance, posting record ratings for HBO and hauling in Emmy nominations hand (of the king) over fist. These days, the only storm cloud on the horizon isn’t the White Walkers, it’s actually something that had, up until now, been Game of Thrones‘s greatest strength: the preexisting source material. How could this be? you ask. The just-ended third season reportedly only used up half of series author George R.R. Martin’s third book. Surely there must be plenty of whoring and wildfire still to come? There is, but here’s the thing: Game of Thrones debuted in April of 2011. In July of that year, Martin published A Dance With Dragons, the fifth novel in his A Song of Ice and Fire series and the first in six years. Since then, the show has gobbled up roughly half of the published output, and Martin? Well, he’s written three scripts for the series and otherwise continued his visible outreach to the hat-and-suspenders community. Even an illiterate wildling can do the math on where this is headed.

So: What will happen when the unstoppable force of television production (not to mention fan and network demand) meets the immovable object of authorly intent? It’s been reported elsewhere that Martin has clued in showrunners David Benioff and D.B. Weiss on his endgame, so there’s a chance that in the near future — perhaps the seventh season, which is now an inevitability — Game of Thrones could blaze past the books, thus creating the delicious irony of TV-only types like myself finally besting book readers in a smug-off. But no one really wants this to happen. In a perfect world, Martin would be ready to publish the conclusion right around the time Benioff and Weiss are completing their finale, thus creating a synergistic dream of united houses that could even make family planner Tywin Lannister stand up and take notice. But in a perfect world, Robb Stark would be dancing the hora at his uncle’s wedding. That’s why it was possible to read more than a little bit of Targaryen menace in Lombardo’s joke that the network had told Martin to “get busy writing.” The endgame, like winter in Westeros, is coming a lot sooner than he may realize.

The messianic journey of La Flama Blanca will be extinguished this fall, when HBO airs the fourth, and final, season of Eastbound & Down. But fear not, fans of comic drug abuse and inappropriate cursing in front of minors! Lombardo announced that Danny McBride and writing/producing partner Jody Hill are staying in the family and developing a new series, one that will involve “a look at high school.” While some might argue that Kenny Powers already wrote the book on homeroom high jinks — then closed the book, recorded an audio version of it, and went out for margaritas — I’m all for anything that keeps McBride and Hill corrupting the minds of fresh-faced extras for many years to come.

No, this is unfortunately not an adaptation of Martin Amis’s scabrous ’80s satire (which, come to think of it, would really flourish in McBride’s pudgy hands). Instead, it’s the latest turn at the plate for HBO godhead David Milch, who, after Deadwood, has carte blanche to do whatever he wants for the network, provided he stops killing horses. According to network CEO Richard Plepler, Milch’s new pilot script is “a look at a dynastic New York media family, a look at power, the complexity of modern life.” OK! Manhattan as the corroded capital of our new gilded age is actually a pretty ripe corpse for one of contemporary America’s greatest, and most exacting, pathologists. One can only imagine the titanic (and, yes, inevitably antiheroic) character Milch has created to serve as the immoral center of it all. (Should Ian McShane stay close to his phone?) Though no official pilot order was given, the fact that HBO mentioned it — and even said Justin Justin Chadwick is likely to direct — means it’s as good as done.

I’m so out on Aaron Sorkin’s overinflated hot air balloon I’m practically back in again. Which, by the twisted logic of my own phrasing, should make me glad that HBO president of programming Michael Lombardo said “I think the odds are excellent” that The Newsroom would soon be renewed for a third season of mansplaining and fixing broken news. Raise your hand if you’re excited to hear Will McAvoy dress down the media for its breathless coverage of the royal baby. Now use that hand to smack yourself in the forehead.

James Gandolfini had just finished executive producing and filming a lead role in this limited series when he tragically died in June. The project, from acclaimed screenwriters Richard Price and Steven Zaillian, will now never see the light of day, at least not with Gandolfini’s footage remaining a part of it. Said Lombardo, “I can’t imagine airing the pilot with James in it.” Conversations reportedly continue about whether to recast and reshoot, but this doesn’t seem likely to me. Justice was already passed over as an ongoing series; giving it the limited green light struck me at the time as an attempt by HBO to stay in business with its signature star. Another sad footnote to a story full of them.

VERDICT: Not good at all.

Discussions are “ongoing” about the future of Christopher Guest’s charming international comedy. All is not lost, but this doesn’t sound particularly optimistic. I bet Plepler and Lombardo would say the future of Tell Me You Love Me is “ongoing,” too, in that it’s never “ongoing” to stop being canceled.

The Right Reasons Podcast: The Challenge and The Bachelorette

Trailers of the Week: Gravity, Snowpiercer, The Hunger Games: Catching Fire, and More