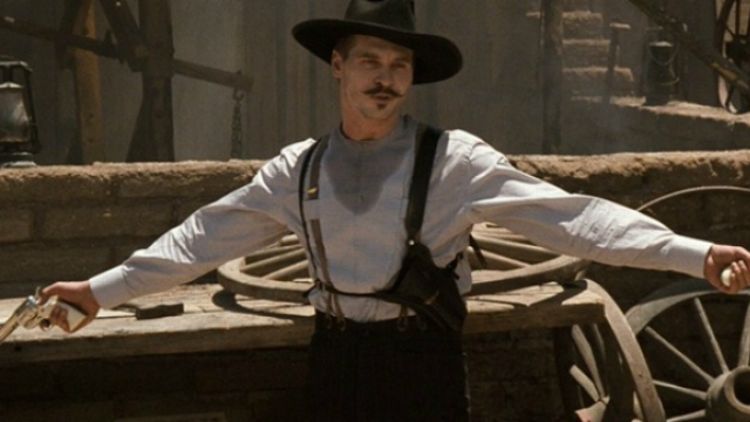 With normal people, it’s depressing when they do what they’re expected to do. Most of our lives are full of routine, mundane and small, and so we crave the unexpected, and when norms do their norms things, it’s just another harrowing reminder that, on our deathbed, we’ll certainly regret having spent roughly 9 percent of our lives getting mad at ourselves for having forgotten to buy baby carrots. But when crazy people do what they’re expected to do, and act crazy, why, it’s cause for celebration: Somehow, some way, once again, these brave future-prophets have managed to come up with some weird fucking shit for us baby-carrot-munching regular folk to try to decipher. Today’s example: Val Kilmer, being very Val Kilmer–y, in an interview with KCRW‘s Anne Litt.

VK: Can I tell a Bob Dylan story?

VK: So Bob Dylan loves “Tombstone,” It turns out. I found out he was in New York so I called my friend and I said you know, I’d love to meet him, is there any chance and he says, “I don’t know, I’ll find out.” And the next call I got I thought was going to be my friend, but it wasn’t, it was Bob.

I was real excited, like a crazy fan, like a child; it was so great. Basically it was like nothing. It was like we were old friends, it was like “you want to come over?” and he was like, “yeah.” So, hangs up the phone, I was newly married and we had a baby and I went in and said “I think Bob Dylan’s coming over … I’m not sure, it could be a hoax … ”

He shows up and sits down and he wants to talk about “Tombstone,” but I just can’t, you know, nor can I talk about any of his stuff. Eventually he says, ‘ain’t you going to say anything about that movie?’ and I said, “do some ‘Blowing in the Wind’ and I’ll … ”

That’s what I said to him, basically I said no. I get like that sometimes. So I turned him down and, I thought, no one turns this guy down. Anyway, I felt like an idiot afterwards, well, yeah I could have said a few lines. They’re fun lines too, like people still ask me to say lines and now I’ll tell any schmo in the airport, I’ll say “I’m your huckleberry,” but I wouldn’t say it to Bob Dylan!

I felt so bad about it. I was like how could I make it up to him? So what I did was, I recorded “It’s Alright Ma, I’m Only Bleeding” but as Doc Holiday and I put in all of the big lines from the movie into the song and made him a little tape.

I’m standing up and applauding. Please do join me up here.