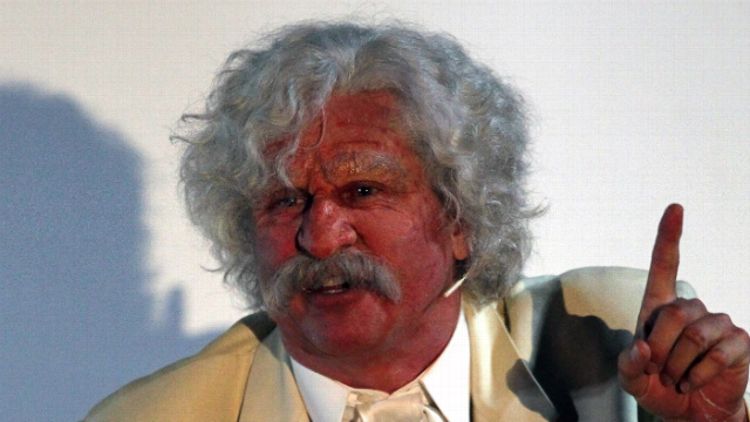 Since his death in 1910, Mark Twain has stood as America’s favorite crotchety uncle; his Missouri wisdom and misanthropic humor have became our national homespun philosophy, the great link connecting “Don’t Tread on Me” with “Get off My Lawn.” On stage and screen, Twain’s cranky avuncularity has lured a long line of aging all-American types to don the white mustache and Colonel Sanders suit, from Bing Crosby to Hal Holbrook to James Garner and, of course, the great Tom Skerritt.

With that distinguished lineage, it is only fitting that the torch should pass to our age’s own iconic figure of no-guff American manhood and tobaccy-chewing plain sense. I refer, of course, to Mr. Val Kilmer, who last week debuted his one-man show about America’s bard, Citizen Twain, in a workshop production in Los Angeles.

Given that Kilmer has been known for a streak of eccentric behavior that has made jaws drop even in Hollywood, (reports from The Island of Dr. Moreau had it that Kilmer had achieved the impossible — made Marlon Brando seem sane and grounded), one can be forgiven at first glance for thinking the event was some sort of April Fool’s joke. Not only did pamphlets plug Val Kilmer’s one-man show of Mark Twain (written and directed by Val Kilmer) but the locale (L.A.’s Hollywood Forever Cemetery) seemed to cue an elaborate prank.

Indeed, many in the audience Friday night came looking for a punchline. One young man shepherded his girlfriend there while keeping the secret of what they were seeing, wanting the truth to unfold before her eyes. But whether L.A. is filled with Mark Twain fans, or Val Kilmer fans, or just fans of a good joke, Hollywood Forever’s Masonic Lodge was packed with a sold-out crowd of 200-plus who had shelled out 60 bucks a head to take a flyer on whatever this might be.

Anticipation for the punchline to come became only more intense when, after the requisite banjo-and-fiddle-duo intro, the lights dimmed and Kilmer, in requisite white Colonel Sanders suit, bushy non-ironic mustache and gigantic prosthetic schnoz, wandered through the audience and in whiskey-cured Twain-twang welcomed the crowd to the “Batman Forever Cemetery,” saying he had just seen Michael Keaton hanging around outside with Louella Parsons.

After that intro, however, it soon became clear that the punchline would be that there was no punchline. As the show was classified a workshop, I am forbidden from reviewing it, so I will just say, Val Kilmer takes his Mark Twain extremely seriously. In the hour and 41 minutes that followed, Kilmer presented what must be one of the best Twain impressions ever created, flowing through the emotional spectrum of Twain zingers to melancholy reflections to multicharacter reenactments of scenes from Tom Sawyer and Huck Finn to a long passage in which Val climbed into the balcony and took position behind a captain’s wheel and steered the theater through a foggy cruise down the Mississippi.

Kilmer at his best onscreen has shown an ability to leap entirely and seamlessly into a character, and throughout the show, one searched in vain for hints of Val — flashes of the famed eccentricity — behind the living, breathing Twain before us. But more than just a tour de force impression, the show was a totally sincere and heartfelt attempt to go beyond the mustachioed caricature and find a deeper Twain, exploring his pain and heartbreaks and tying them to his searching intellect. The play developed out of a three-year-long screenplay project Kilmer has been writing about Twain’s feud with Christian Science founder Mary Baker Eddy, and as demonstrated in the play and in comments after, he clearly knows his Twain inside and out.

As the night went on, the sense of what the heck this was all about became clearer as Kilmer’s vision of Twain unspooled. The stories and reveries grew progressively darker as Kilmer’s Twain wandered far from homespun Jumping Frog into intergalactic searching on the nature of life in the universe. Gradually, the line between Mark Twain and Jim Morrison became clear, and we saw a version of Twain seldom portrayed: America’s first great New Age philosopher in folksy garb. It was a unique vision, but an interesting, thoughtful, and sincere one. And it was not entirely unconvincing.

After the play ended, Kilmer took questions from the audience as his makeup artists peeled away his mustache and giant prosthetic nose, slowly transforming himself back into the 21st-century actor as the accent fell away. While still 70 percent Twain, the great author was asked about his favorite Val Kilmer film. “I am partial to Tombstone” he answered sagely. (Although one imagines the actual Mark Twain would not overlook Val’s performance in Real Genius so easily.) Fifteen minutes later, the transformation complete, Kilmer accepted the fawning queries of the crowd. Whatever brought them, they seemed more than satisfied by their night with Citizen Val. Asked by the star whether the show had been “too long” the crowd tut-tutted as one. Returned to Earth as Kilmer again, a touch of actorly petulance shot through the air when an audience member rose to offer a studio-type note, suggesting he needed more backstory on one of the anecdotes. It may have been Val Kilmer whose eyes shot daggers back at the woman, but his “Uh-huh” would not have sounded out of place on the lips of Twain, who once said, “Sometimes I wonder whether the world is being run by smart people who are putting us on, or by imbeciles who really mean it.”

Filed Under: Val Kilmer, We Went there

One Angry Mann: Prospective Gigs for a Post-Current Keith Olbermann

Happy Indie-Rock Monday With The Walkmen, Dirty Projectors, and Liars