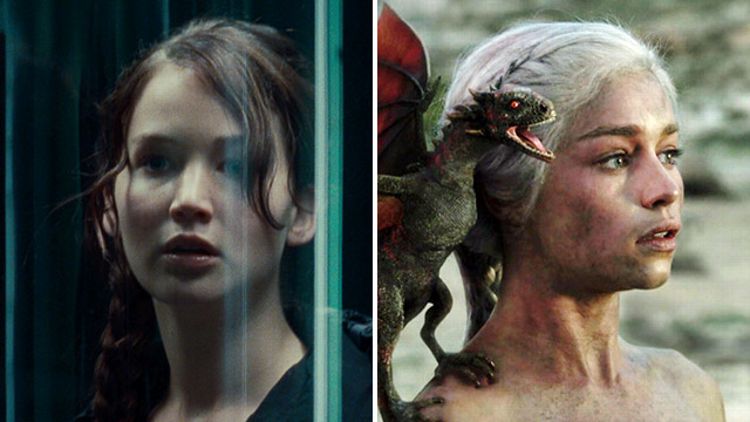 The Futurist is a new, periodic dispatch from the front lines of tomorrow — a gleefully wigged-out examination of science, science fiction, technology, culture — and all their lunatic fringes. To paraphrase Douglas Adams, we will think the unthinkable, do the undoable, and eff the ineffable.

Season 3 of Game of Thrones is over, and I’m going tell you why I never watched it.

In fact, I’m going to tell you why I’ve never watched a single episode of Game of Thrones, why I never will, and why I tend to avoid anything even remotely like Game of Thrones. If you, like everyone I know, are a fan of the series, this will annoy and exasperate you, but please take comfort in the fact that you’re not alone. You’re having a wonderful time with all your friends, gathering in dens to drink beer and piggyback on each other’s HBO GO accounts. You’re on Twitter, squawking about spoilers and dropping mysterious medievalish surnames with familiarity. You’re reading Grantland, thirsty for the wisdom of its resident Throne scryers.

I, on the other hand, am very much alone. I’ve been waiting this one out, hoping the feudal roar dies down before I’m forced by social rip current to hold my breath, dive under, and just binge-watch the damn thing. In this manner I also largely avoided The Hobbit — which I’m told, anyway, was one long scene of a troll’s greasy paw gripping a chicken leg — and the bulk of the Lord of the Rings and Harry Potter franchises. As for Thrones, I know I’m depriving myself of what people tell me is maybe the best televisual experience of our time. But I’ll continue to petulantly hold out, like a fool, just to bear this one specific cross: I don’t fuck with fantasy.

Instead, I’m married to science fiction, and no, they shouldn’t be shelved together because they are different, in an inherent way that hundreds of heads have tried and failed to conclusively articulate and most sane folks couldn’t care less about. Like pornography, those of us who’ve made it our business to care know it when we see it. But most will agree on the basic dividing line of possibility: fantasy, with its dragons, greasy troll paws, etc., could never happen, while science fiction could. For the fantasy writer, the creative act is one of pure imagination; his or her invented world need not hew to a physics consistent with our own. And while the science fiction writer is imaginative, too, he or she has to imagine within parameters — parameters that, although much broader than the relatively oppressive conceits of realism, are finite.

Science fiction begins with the world, then clips certain wires in order to demonstrate that world’s trajectory — conceptual, social, moral, ecological, and metaphysical. The variables can be technical: What if all these computers woke up tomorrow? They could be deeply human: What if we cease to be able to breed? Great science fiction, the truly apical shit, messes with many wires at once to create complex bombs that implode slowly in the mind. Fantasy is free to magically relax the structure of the cosmos at will. But if science fiction wishes to do the same, it must invent a method how, a reason why — and then cope with the cascade of consequences. These metrics absolve a lot of your favorite fantasy books and movies from the sweeping spray of my haterade. Despite its costuming, for example, The Hunger Games falls under my rubric for science fiction: Its world is implicitly placed in relation to our own, and it poses questions about how a society might get from Point A to Point B. (Demon on my shoulder: “You see how GoT doesn’t ask those questions? How it just says, ‘Look how positively thrilling Point X is!’?”)

I’m not asking you to forswear the pelts and circular braids. I promise all the skulduggery you’ve come to love can be found in some of the classics over on my side of the gulf. Plenty of sci-fi practitioners dabble in both arts, often with enough shared real estate that you might not even notice your dessert’s been swapped out for something more nutritious. Ursula K. Le Guin! From the quill of this grand dame of science fiction’s literary new wave came abundant fantasy-leaning masterworks. The Left Hand of Darkness, for instance, is populated with castles, complex power struggles, a character literally called “Therem Harth rem ir Estraven, prime minister of Karhide to mad King Argaven XV.” You can have that, guilt-free, and more, because Karhide is on a planet supposedly in our universe, in our distant future. Tasked with making contact with it, we discover mores that challenge basic human conceptions of sex and gender, and when we get back on the earthbound ship we’re the better for it. It’s a tiny difference — more like a conceptual stance, really — but it makes all the difference. Waking up is what lends gravitas to dreams.

It’s not like the actual physical universe lacks for fantastic elements. Reality is nuts, and it gets nuttier very second. “Obvious fact:” wrote David Foster Wallace in 2003, “never before have there been so many gaping chasms between what the world seems to be and what science tells us it is.” The planet looks flat, dimensions seem only three, the mind appears mysterious — and yet, the civilized person knows we live on an orb in centerless space, that there are untold dimensions beyond our capacity to perceive, and that even the most transcendent experience boils down, as Foster Wallace put it, to “chemical transfers in 2.8 pounds of electrified paté.” The more science probes life’s mysteries, the more mental hurdles we must overcome just to hold onto a fleeting sense of what is real.

To those who imbibe it, science fiction is fuel for dealing with a reality increasingly drawn from some fetid cyberpunk nightmare: from the martyred whistleblowers, anonymous hacker cabals, Chinese cyberterrorists, and super-colliding particles in the morning news. We move closer toward the future every day without ever reaching it, but science fiction throws into focus the slippery transitional moments between present and future; it races against time to write tomorrow’s myths before they diffuse into the now, a race that it is by definition always losing. But the effort, with its toothy combo of sublimity and rigor, edifies. Meanwhile, fantasy is an escape, at best a liniment against the present; after the blood vengeance, ravens, and caves, it returns you to your sofa unscathed — but also unchanged. Although sci-fi entertains with equal élan — hell, it’ll transport you to glittering interplanetary heights — it also doubles back, hard, to confront the known world in some precisely cognitive way designed to leave you, the reader, wondering a great many things: about where you’re headed, whether you are complicit in the world, and how you can possibly be sure, when it cuts to the quick, whether you are really you at all.

Ever since humanity acquired, sometime in the 19th century, both a sense of the irreversibility of technological change and the ability to affect its own future, science fiction has been a genre with (fuzzily sometimes, and often so marginally that it may as well have been secret) great critical power. The speculative game’s been on for at least a hundred years, and we’ve had ample time to mythologize all the futures that we are likely, ourselves, to engender.

As individual stories and speculations, science fiction is not meant to be predictive, nor is it particularly good at it, but as a collective experience — something that spans the best efforts of thousands — it has all the trappings of augury. Like those feckless infinite monkeys at their typewriters, eventually one of the novels or stories I love will come true. And when it does, we’ll all go back to it like a holy book, and we will send our academics to plunder every detail of the context in which it was written. We may even try, in vain, to reproduce it, seeking to mirror the moment when a portal opened up in front of just one person and showed them the future. The real one. I believe this with all my heart. Because — see? — I’ve just added one more potential future.

One of our best, the late Philip K. Dick, believed this too. Likely due to a fugue state of drug addiction and psychosis, he Glimpsed Into The Portal. Somewhere, he felt, beyond the screen of conflicting illusions we call the world, hides reality. He defined the real as that which doesn’t go away when you stop looking at it, a place where all our preconceptions, and everything meaningless, disintegrates, like clouds of dust diffusing over time. “I have gazed at a constantly changing world,” Dick wrote in 1978, “and declared that underneath it lies the eternal, the unchanging, the absolutely real.” He thought such a piercing look was possible, in the present moment, for the right kind of illuminated mind — and for this reason he should be shelved among the mystics instead of the engineer-poets who tend to populate science fiction, dreaming their technological dreams.

I’m not interested in writers who take liberties with genre to create a sexy pageant made flesh on some other world. I’m with the flipped-out mystics, those who, like Dick, take the whirling-dervish approach to questing for truth. Although anyone can imagine the future — we all do it, every day — it can’t be blueprinted as though it were an episodic or sensible thing. And it can’t be avoided, either: It lies in wait for us, whether or not we are ready, coiled with surprises. The history of science is filled with the unexpected, as is the history of humankind; if the present is any indication, our future world will always be weirder than we can logically extrapolate. Its true sloppy infinitude can only be summoned in flashes of madness.

If you want to read science fiction properly, in my opinion, you have to see it as a hunt for this madness. You’ve got to forage through crummy paperbacks for shimmering flashes of the realities hidden all around you. If you approach it like this, like a seeker, you may one day discover a needle in the biggest haystack of all: You may look down and see, not on a mythical Dark Age continent, but right there in the dirt at your feet, the path that curves into tomorrow.

Filed Under: Fantasy, Game of Thrones, The Hunger Games