Trey Songz vs. Leatherface, Plus Other R&B Heartthrobs and Which Infamous Movie Killers We’d Most Like Them to Be Terrorized By 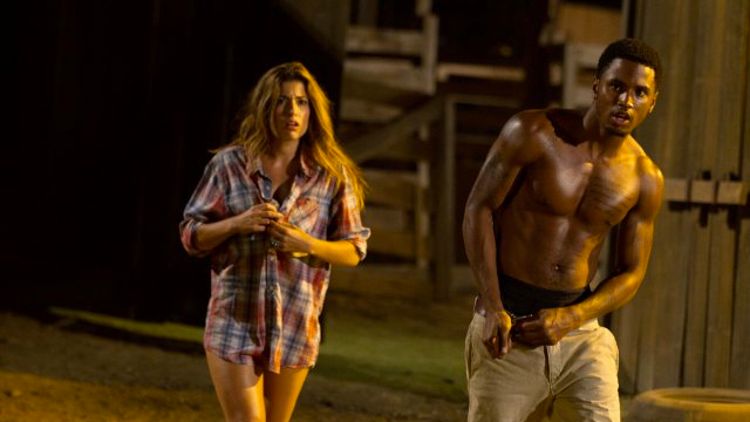 The illustriously shirtless Trey Songz — the R&B paramour behind such bedroom jams as “Love Faces,” “Neighbors Know My Name,” and “I Invented Sex” — is making his movie debut this weekend in Texas Chainsaw 3D, the latest installment of the pluckily resilient horror franchise. This time, a young lady road-trips with her friends to a small Texas town to claim a mysterious inheritance from a newly discovered grandma, and — surprise! — Leatherface shows up to do some chainsaw massacrin’. Songz plays the young lady’s boyfriend, and is barely in the trailer … although he does get to drop an instantly immortal line of dialogue: “Look like Granny liked to play a little pool.” And, somehow, it all makes perfect sense: There’s something about the lasciviousness of Songz and the human-skin-mask-making of ‘Face that just goes together. And so the primary question going forward is: Which R&B heartthrob should go the slasher flick route next? A few suggested pairings, below.

Before the likes of Frank Ocean and Miguel personalized and accelerated and deepened the genre this year, the standing vogue in R&B was this sort of faceless, smooth-to-lecherous, crooner ladies’ man standard. Basically, a sex-obsessed nice guy with an eight-pack, a perma-come-hither smile, and a preternatural propensity to getting rained on in music videos. Trey Songz was the best in the biz when it came to that kind of thing, but operating on a lower level than Trigga was a whole slew of physically fit men who wanted to rock you all night all night, girl. So let’s get a few of these — say, Jeremih, Jason Derulo, and Taio Cruz — and let Freddy just do a whole nightmare bedroom bloodbath thing. While we’re at it, let’s get the C-level folks together too — how about J. Holiday, Jay Sean, and, oh, Jaheim — and let Freddy’s inferior colleague Chucky do his thing.

Technically, Lloyd slots in somewhere alongside the names above. But ever since his gem of a 2008 single “Girls Around the World,” he’s enjoyed a certain critical respect the others are bereft of. Which means he probably deserves to get killed by a horror legend all on his own.

Omarion vs. The Leprechaun

Tyrese has already spent several interminable hours avoiding being being murdered by Decepticons, so let’s just keep that going.

The Weeknd or Drake or Miguel or Frank Ocean vs. Hannibal Lecter

The upper echelon of New R&B needs a worthy antagonist — someone sensitive, intelligent, and possessive of a taste for the finer things.

D’Angelo or Maxwell vs. Anton Chigurh

The older guard of R&B classics-makers need an equally classy villain. If Javier Bardem ever wants to bring back the bowl cut, we’ve got some people for him to cattle-gun to death.

Imagine it: Saw VIIXXIIIXVII, a song suite directed, scored, visualized, concepted, and imagineered by — and also featuring in multiple roles — Mr. R. Kelly. This is something you would not want to see?

The-Dream vs. Matthew Lillard and Skeet Ulrich from Scream

I don’t really have a reason why. It’s just that Dream is a random-ass dude, and seeming him murked by Lillard and Skeet just seems right.

Chris Brown vs. Everyone Left

I’m not saying this is the right way to have a conversation about Chris Brown. I’m just saying if you did make a movie where Alien and Predator and Cujo and the piranhas from Piranha 3D and Mark Wahlberg from Fear and the fisherman from I Know What You Did Last Summer and death from Final Destination and murderous snowman Jack Frost all chased down Chris Brown, you’d probably have some serious dough on your hands.

Listen to R. Kelly's Tribute to the Kids of Newtown, Connecticut