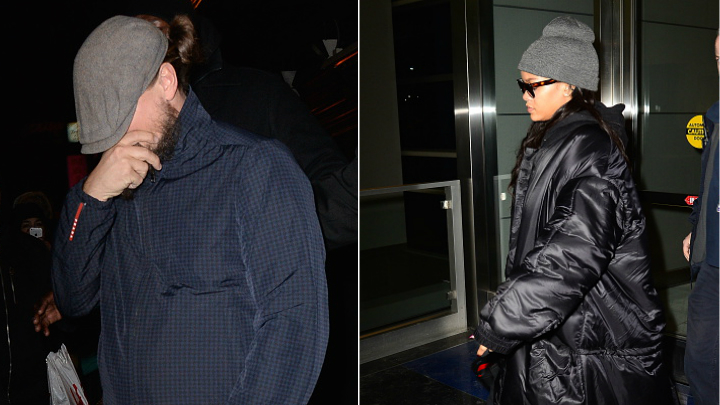 The Oscars have come and gone. It was a boring show, and A-listers like George Clooney, Matt Damon, Jennifer Lawrence, and Amy Adams didn’t even show up. Leonardo DiCaprio was there in support of a documentary he produced, Virunga. Given the lack of true Hollywood elite, it’s a surprise he wasn’t on the broadcast more frequently. The cameras were probably told to avoid pouting faces. Leo has nothing to be unhappy about, though. He may be dating Rihanna.

The saga of Leo and Rih began where many relationships do: the Playboy Mansion. It seemed destined to be a short-lived romance when she allegedly demanded he work on his physique. A mutual interest in yachting was not strong enough to keep them together, or so we thought! In the last week, there has been a deluge of speculation about their status, and a second storm of related parties offering opinions. And still we ask: Is Leonardo DiCaprio dating Rihanna? Let’s look at the evidence.

Leo and Rihanna spent Valentine’s Day together in New York. I thought she was in town to sit courtside at NBA All-Star Weekend events, but perhaps she had grander plans with her man. They were seen at clubs 1 Oak and Up & Down one night, and at Paul McCartney’s secret concert on the actual big day. According to Us Weekly’s source, they “were whispering and staring into each other’s eyes,” and they left the concert early. Either Rihanna is certain that McCartney won’t be offended, or she doesn’t think too highly of “FourFiveSeconds,” because leaving early is rude. Despite the lack of conspicuous kissing, committing to being in each other’s proximity on Valentine’s Day is major. Conclusion: Dating.

Rihanna just celebrated her 27th birthday. It’s hard to believe it’s been 10 years since a 17-year-old stormed onto the scene with “Pon de Replay.” She celebrated 27 at Jimmy Goldstein’s house. The party went until 5 a.m., and guests included Mick Jagger, Jim Carrey, Bill Murray, and Paris Hilton. And Leo! No one can ever accuse Rihanna of ageism, though this party does seem to be lacking females of equal power and celebrity. In any case, Leo was there, and the pair was seen flirting, though no PDA. It’s hard to imagine she’d let Leo party if she had no interest, and it’s hard to imagine he’d attend if their liaison was truly in the past. Conclusion: Not dating, but not not dating.

Chris Brown is often characterized as erratic and/or violent, like the time he punched Rihanna. However, when asked for his thoughts on this potential relationship, he was resoundingly reasonable. Quoth Breezy, “That’s the upper, upper echelon.” Even Brown knows that dating Leonardo DiCaprio is a big deal. But given the tumultuous past between Brown and Rihanna, how could he be so calm about her moving on and moving up? Conclusion: Not dating.

The day after the McCartney concert, Leo supposedly flirted with Dakota Johnson, newly minted star of Fifty Shades of Grey, at the SNL 40 after-party. Rihanna was also there. Life and Style reports via a “source”: “He put his arm around Dakota and led her into the grand ballroom … He told her, ‘Let’s go look at all the celebrities.’” Hm. DiCaprio is, as Brown instructed, in the upper echelon of the people he allegedly suggested gawking at. He may make questionable decisions regarding his own facial hair. But there’s no other evidence to suggest he would ever stare at famous people. He is famous people. When you’re the king of Hollywood, people just look at you. Three nights in a row is a lot of Rihanna face time, but it seems awfully suspicious he would disrespect her to objectify his own. Conclusion: Dating. This report is so ludicrous that Leo and Rihanna must be “hanging out,” at least. Sorry, Dakota.