Tommy Morrison and the Legacy of Rocky V 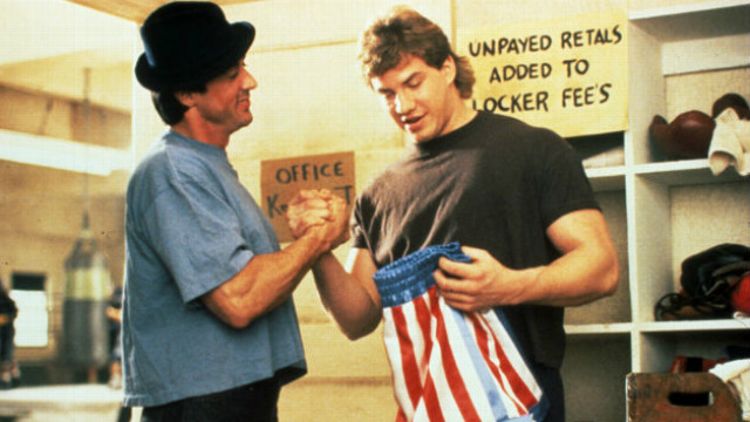 Like fine wine or Bryan Cranston, Rocky V is a film that has improved dramatically with age. Checking in at a Police Academy 2–esque 27 percent on Rotten Tomatoes, I would defy someone to watch it two decades after its release and not feel the rush of high drama, low camp, and tragic realism that courses through the film.

The high drama comes from Academy Award–winning director John G. Avildsen and Sylvester Stallone choosing to send the iconic Rocky Balboa crashing to earth. This is a humbled, bankrupt, deeply damaged Rocky getting brain scans that show the kind of cognitive impairment few discussed back in 1990. This is a Rocky whose mental incapacitation leads him to bouts of grandiosity and temper tantrums, leaving him a hero in his old hood but a stranger to his 12-year-old son. In other words, we should consider ourselves lucky that Roger Goodell hasn’t seized the film negatives and had them destroyed. This is a film ahead of its time.

The low camp involves seeing child actor Kevin Connolly, who would go on to play Eric on Entourage, first bullying and then getting his ass kicked by Rocky’s bookish kid. For anyone who hate-watched Entourage, it is too sweet for words to see “child-E” get knocked down to the pavement.

Other light moments arrive with Burt Young’s Pauly mangling the language in ways that would make a different Paulie jealous, like explaining to a confused Rocky that “‘cojones’ is Latin for Spanish nuts.” Then for the massive demographic of feminist Rocky fans, we get to see Adrian finally not be lame. Now when she tells Rocky not to fight, she isn’t just the least-inspiring archetype in film history, but someone who actually understands that poverty and family beat wealth and brain damage any day. It is Talia Shire’s finest work since she was showing Carlo Rizzi a new way to set the table.

The undercurrent of tragedy in the film is like nothing save seeing River Phoenix stand up to Kiefer Sutherland in Stand by Me. It erupts every time you see 12-year-old Sage Stallone, who died last year at the age of 36, playing a character trying to escape his father’s shadow. It involves the legendary Burgess Meredith clearly close to shedding his mortal coil, as Mickey, giving Rocky advice from beyond the grave.

But rewatching it today, there’s one presence in the film who unites the high drama, low camp, and tragic undercurrent: boxer Tommy Morrison, making his debut as up-and-coming fighter Tommy “Machine” Gunn. Morrison died this week, and the full story of his time after his 1996 HIV diagnosis, as chronicled by Elizabeth Merrill, is devastating.

“Tommy had a hard time with it back then,” his promoter Tony Holden told Merrill. “People wouldn’t shake his hand, wouldn’t come close to him, wouldn’t let babies next to him. And I saw that, and you took a kid from this height of stardom, being in movies, to the point where everyone wanted to be Morrison’s friend to the point where, man, nobody wanted to be in the same room with him. I witnessed it. And it was heartbreaking.”

Morrison went on to say that he didn’t in fact have HIV. It was a false positive, a government conspiracy, anything but what it actually was. He will — and should — be remembered as a cautionary tale: the anti–Magic Johnson of the sports world, someone who chose an awful death instead of a chance at a different life.

It’s such a waste; in Rocky V, you see it. You see in Tommy Gunn all of the stubbornness, pride, anger, and poor choices that defined Tommy Morrison during the last years of his life. Gunn is pure hunger, and after Rocky takes him under his wing, he is easily swayed by the manipulations of Don King stand-in George Washington Duke (played with gusto by classic movie “that guy” Richard Gant).

Also — and this is no small thing for a boxing film — Morrison could fight. The former WBO champion was a classic puncher and in Rocky V he throws hands in the ring like he’s “trying to knock down the walls of heaven.” Dolph Lundgren looks like a ham-and-egger compared to Morrison; Mr. T, a WWE sideshow. (Carl Weathers still kicks ass.) It’s the difference between an amateur and a professional: In basketball movie terms, it’s the difference between Ray “Jesus Shuttlesworth” Allen and Wesley “Could that dribble be any higher?” Snipes.

And then there is the final fight scene. To the film’s credit, the climactic showdown between Rocky and Tommy Gunn isn’t in a ring, but behind a bar. Take six minutes to watch it if you either have never seen the film or dismissed it when first released.

Stallone has never, ever, looked so fluid throwing hands. We are reminded that Rocky really isn’t a boxer but a street fighter, a former loan shark’s collector who is more comfortable in an alley than in the ring. Other than sparring with Paulie in a parking lot, we have never really seen Rocky in his natural habitat and it is revelatory. Morrison (also no stranger to real-life brawling) and Avildsen give us a scene so far removed from the slick polish of “Rocky defeats Communism” or “Rocky defeats Scary Mohawked Black Man” that it is bracing. I saw Rocky V the day it came out, the last part of a Rocky quintuple-feature at Loews 84th St. Cinema, and half the crowd walked out jeering and half were literally standing on their seats. (After 12 hours of Rocky, I think I was on the floor.)

After Tommy Gunn has been dispatched, Rocky walks up to the nefarious George Washington Duke, violence in his eyes. Duke says, “Hit me and I’ll sue.” Rocky then punches him into next week: “Sue me for what?” It’s a statement that he is finally comfortable in his own skin. Like Porgy, he has plenty of nothing and nothing is plenty for him.

Upon rewatching, it’s impossible to not look at Morrison and wish he had gotten that message. Morrison couldn’t handle being open and honest about the fact that years of high-living left him with a virus he didn’t want to admit carrying. It’s a tragic end but it produced something that demands a second look. George Bernard Shaw said, “Without art, the crudeness of reality would make the world unbearable.” Tommy Morrison, if nothing else, left behind what is in my mind a piece of art. It makes the crudeness of his life, his choices, and his death somewhat easier to take.

Afternoon Links: Meditate on the Ephemerality of Internet Culture With This Iron Man Balloon Costume