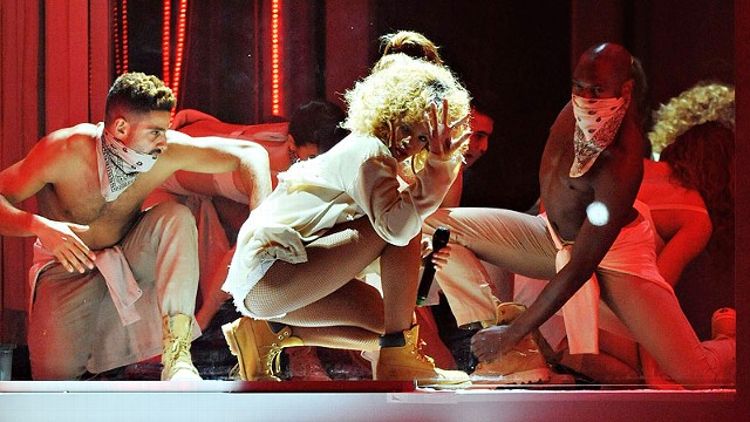 Ukranian singer Elka (pronounced “Yolka”) is a judge on the Ukranian version of The X Factor. Feeling this video because there’s a cat in it that looks like my cat. Yes that’s all it takes.
Best YouTube Comment: “Slov net!!! Supeeeeeeeeeeerrrrr” — 99guky
Grade: B+

Yeah yeah yeah, we know. The real question is, will “Talk That Talk” still be Rihanna’s next single — as it should and was once rumored to be — or did Riri piss off manager/surrogate father figure Jay-Z so much with those two Chris Brown remixes that Hov will refuse to have anything to do with promoting “Talk That Talk,” on which he does some of the worst piss-take bars of his life.
Best YouTube Comment: “i would love to die by being suffocated by Rihanna sitting on my face.” — CodFilmsHD
Grade: A

This band’s name is Degrees and as far as Google Translate tells me the song is called “Sweeps.” I liked the beginning best and then realized I was waiting for the beat to drop because I’d been listening to too much Kenny Powers dubstep.
Best YouTube Comment: “This. is why i love russia.” — 2vilku
Grade: B

Anna Shurochkina is a 21-year-old singer better known as Nyusha. This video is all over the place and reminiscent of Britney a few albums back. She shoots a clown out of a cannon. She is a marionette like ‘N Sync in “It’s Gonna Be Me.” I think I see vampires? There are definitely leather catsuits. Catchy!
Best YouTube Comment: “@TerminatorMega so if the person has rich parents and he/she can be owner of so many companies or famous in particular area..where everything will be possible by money ..cause in this world nothing is free..it’s not a big deal …or not he/she is doing any biggest work of the life or never gonna idol..from 0 level to the top is real hero. a real idol. Madonna is a greatest example of it.” — born2voyage
Grade: B+

Funny how plodding mid-tempo adult contemporary ballads — like this one by Moldavian songwriter Dan Balan — sound exactly the same in any language.
Best YouTube Comment: “I got laid listening to this song” — hagawi123
Grade: D

Does anyone else get the impression that everyone on The Voice is fucking?
Best YouTube Comment: “Who’s Jagger” — countryboy8287
Grade: C

Love the little phone conversation at the beginning and the models leaning awkwardly against marble columns with wine flutes. Also love how it’s overcast in half the shots. Don Omar is having another good year.
Best YouTube Comment: “Its snowing in my country and this song reminds me of summer I hate snow and love summer :D” — Oxia
Grade: B

Electro house based out of Tel Aviv. Vengabus and violins. Not my cup of moon milk.
Best YouTube Comment: “Ohh, relly positive! and music and video! Like it!” — Enticelove
Grade: C+