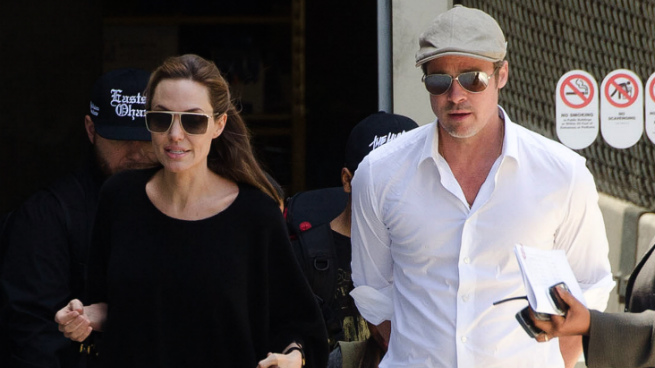 Celebrity Craft Project Masquerading As a Wedding of the Week: Angelina Jolie and Brad Pitt’s Nuptials

After the sudden announcement, details about Brad Pitt and Angelina Jolie’s wedding have trickled out. It was a small affair, with 20 guests, at Chateau Miraval in France. The photographs were sold exclusively to People in the United States, while Hello! has the rights internationally. The magazines reportedly paid at least $2 million between them, which explains why the pictures are not readily available online. They want you to pay to see them. Luckily, we live in the Internet age, and someone in Brazil kindly scanned the pages from Hello! which you can find here. The New York Post speculated that in previous years, Brangelina could have gotten more money, but the weekly tabloids are not exactly cash-rich, and Us refused to enter a bidding war.

Anyway, as has been reported on numerous websites (including this one), Angelina wore an Atelier Versace dress designed by Luigi Massi, and the veil sported embroidered doodles drawn by her six children. I wonder if she chose Massi as her designer because he was willing to indulge this high-level after-school arts project. There are plenty of ways to include your children in the wedding without sacrificing the bride’s look, which, scribbles aside, was boring. In fact, Brangie did find other ways to involve the six kids — they were a part of the ceremony. Two walked down the aisle with Angie and Brad (Pax and Maddox), two were flower girls (Zahara and Vivienne), two were ring-bearers (Knox and Shiloh), and they wrote the vows. Maddox, Pax, Shiloh, and Knox all wore black suits of unknown provenance. People makes sure to highlight that Brad and Vivienne (she’s one of the twins) wore clothes they already owned, or from their closets, to use the magazine’s parlance. I’m not exactly sure what to make of this detail. Are we to conclude that:

• Brad Pitt is so down-to-earth that he need not buy a new suit for his wedding? He probably owns only designer suits to begin with, so I don’t see much sacrifice here.

• Material items mean little to Brad and all he cared about was being wed? Well, Brad spent $250,000 and one year designing the engagement ring, so material items do have some value to him.

• Brad and Angie forgot to get something special for Vivienne, so Brad took a hit and agreed to neutralize the gaffe by wearing something old? Maybe it’s more like …

• They actually forgot something for Brad and Viv? The story also says Brad forgot to pack a tie, so he borrowed one from one of his sons. I’m assuming he borrowed from Pax, the tallest, because it’s really hard to imagine how anyone else’s could fit. If you look back at Brad in the Hello! photos, his tie doesn’t look particularly small for his frame. It doesn’t even look like a hipster statement of some kind. I’m officially calling this tie detail into question.

• This is some Jolie-Pitt quirk of inscrutable meaning? This is most likely. Brad and Angie have impressively controlled their own narrative for some time now, and the announcement of their wedding is further proof. We know only what they want us to know, and we’re pawns in their game.

Now, the family is in Malta to film a new movie Angelina is directing. According to Radar, they’re paying locals to leave the island while shooting, offering as much as $200,000. Perhaps they sold the wedding photos to get the cash to fund this endeavor.

The Fappening is still happening. Less than a week since the photos leaked, there have been countless developments regarding all of the celebrity victims. Here’s what’s going on with the bigger names:

• Justin Verlander and Kate Upton won’t comment. Before the Tigers’ Tuesday game against the Indians, Verlander told reporters, “I’m not going to comment on my personal life … The focus for me is on the Detroit Tigers.” Deadspin determined that Verlander’s phone was hacked, not Upton’s. So all those photos of her were taken on his phone or sent to him.

• Victoria Justice has also lawyered up. She originally tweeted that the photos of her were fake, but as Nickelodeon stars are wont to do, she used TwitLonger to set the record straight.

• McKayla Maroney also claimed the photos were fake when they first surfaced, but her legal action suggests otherwise. TMZ says her lawyers have contacted Porn.com claiming that not only does she own the copyright, but also that she was underage in the photos.

With Apple claiming it isn’t to blame for the security breach, TMZ says it may be a case of phishing. You know those emails that look official but are actually from scammers? That may have happened here. J-Law and Kate et al may have clicked on a fake email thinking it was from Apple. On one hand, I wouldn’t be surprised if celebrities fell for that trick. After all, they don’t spend their days sitting at desks with Gmail open. It’s conceivable that a phishing email could look convincing when read in Apple’s Mail app. But on the other hand, they don’t spend their days sitting at desks with Gmail open. Would they really pay attention to a random iCloud email? The biggest mystery remains how all these celebrities have so much iCloud storage space. My phone is constantly telling me I’m out of room and therefore it can’t “back up.” I’d like to know how much space these ladies have and if they find it sufficient. Maybe these are questions better directed at the various assistants who must have signed them up.

Simmering Family Feud of the Week: Mark and Donnie Wahlberg

While we’re on the topic of weddings, Donnie Wahlberg and Jenny McCarthy just had one! Sherri Shepherd and NKOTB members Joey McIntyre, Jordan Knight, and Danny Wood all attended the wedding, held near McCarthy’s hometown in Illinois. (Why wasn’t Jonathan Knight there? Hard to imagine he’s exceedingly busy.) Notably not there: Mark Wahlberg. His official reason for missing the wedding was a schedule conflict: His daughter had a birthday party in Los Angeles. But TMZ has a competing explanation: He and his wife, Rhea Durham, were unhappy about what McCarthy said about them on Howard Stern’s radio show back in July. In the interview, McCarthy claimed Mark “approved” and would definitely be at the wedding. So maybe the more famous Wahlberg decided not to go just to prove a point. Another brother, Bobby, also skipped the nuptials. Mama Alma Wahlberg, now quasi-famous thanks to Wahlburgers, didn’t go because she’s scared to fly. As a consolation, Mark tweeted and Instagrammed his well-wishes. I’m not sure if this was aggressive, passive-aggressive, or just kind of rude. Let’s hope this is covered on the next season of their show.

Justin Bieber returned to his native Canada this week. The excellent 2011 film Justin Bieber: Never Say Never depicted trips to his hometown of Stratford, Ontario, as rejuvenating — a chance to visit his grandparents, hang out with the friends who knew him before he became a monster, and sleep in his own bed. Now, though, Biebz goes to Stratford to do what he does in his adopted home of America: ride his ATV and terrorize strangers. After nearly riding into a woman in Beverly Hills last week, he actually crashed into a minivan driven by a paparazzo. Selena Gomez was aboard the ATV as well, so that relationship really is back on. He could be charged with dangerous driving and assault. Since he is on probation for two years because of the time he egged his neighbors’ homes, this incident could put him in violation. I’m concerned for him, not only because he has demonstrated an insatiable appetite for mischief and delinquency, but also because now Gloria Allred is representing his opponents in the Dave & Buster’s incident, as well as the photographer who was driving the minivan. I’m no legal expert, but fighting the same notorious lawyer on two fronts seems less than ideal.

Celebrity Reconciliation of the Week: Ciara and Future

Ciara and Future had a baby boy four months ago. He’s adorable. Then they broke up because, allegedly, he cheated on her while on tour, which Blind Gossip teased back in June. According to the rumors site, he cheated with Rihanna and Keyshia Cole (at least). And now, less than a month removed from the split, they’re back together. They’re doing it for the baby. Good luck to them.

The Rock Is Playing Supervillain Black Adam in the 'Shazam' Movie. So Who's Black Adam?

TV Check-in: 'The Bridge' Is the Best Show on TV You're Probably Still Not Watching