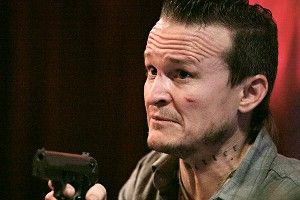 The other day I somewhat randomly turned on an episode from Season 1 of Justified called “Hatless.” The episode starts with Raylan tying one on in the middle of the day at some dive bar, where he proceeds to get into a fight (which he starts) with two degenerates he antagonizes by saying, “I didn’t order assholes with my whiskey.” They beat him to a pulp. It’s pretty awesome.

Watching that sequence, watching that self-destructive character order up an early-morning ass whipping, made me marvel at how far Raylan Givens has come. He still likes wearing the cowboy hat and still goes for his gun quicker than most, but for the most part, this new-and-improved Raylan seems content in his work and in his home. And while the character is still eminently watchable, it’s almost boring to see him so happy. Well, with “Thick as Mud,” the fifth episode of the third season, it would seem old Raylan, at least some parts of him, might be coming back.

Dude, where’s my kidneys? “Thick as Mud” begins with Dewey Crowe in a bathtub full of bloody water, sporting new scars on his stomach. Male nurse from hell Lance is providing him with a very peculiar brand of bedside bathtub-side manner: You can either buy back your recently removed kidneys for 20 grand, or you can die a slow, horrible death. Ah, that old chestnut.

Dewey goes on a frankly hilarious crime spree to buy back his vital organs. First he robs an appliance store where he comes up with only $200. Then he hits a strip club, where he doesn’t do much better. (“It’s ten o’clock in the morning!” shouts one exotic dancer.)

Raylan, again paired with Rachel Brooks, is not exactly hot on Dewey’s trail as much as he is sauntering in its general direction. This is Dewey Crowe, after all. The marshals piece together the outline of Dewey and Lance’s criminal intentions, despite some resistance from Lexington P.D. (“You really think a male nurse is gonna go all Butch and Sundance?” one cop asks. “Just Butch,” responds Raylan.)

After Raylan delivers a light dose of police brutality and makes a rather flirtatious stop by the strip club our crime-wave surfer just hit, he starts to figure out the Eli Roth-like depths of poor Dewey’s predicament. He finally catches up with Dewey, who is turning the backroom of a convenience store into his own private Alamo. Once he convinces Dewey that his kidneys are indeed in place, Raylan confronts the true culprits of this crime: Lance and his vixen nurse girlfriend, Layla.

After being drugged by the smiling Nurse-Ratched-in-training, Raylan comes to and shoots Layla (who had already killed Lance — you should have seen that coming, Lance). As Art comments later: “So … she shot him. You shot her through him. Is that right?” Dewey has his kidneys. And Raylan? He has another body on his all-time hit count.

While all that Keystone Kidney Kops business is going on, Boyd Crowder is nursing his not-so-guilty conscience. It’s not that he’s bothered about capping Devil — it’s the individual Devil was acting as an agent for that’s making him drink alone. Ava — in her ever-evolving role as Lady Macbeth — eases his mind, assuring Boyd that no matter what evil forces are trying to topple their evil gang, the Boyd Crowder Bird Gang/Oxy Cartel is up to the task.

The nonkidney portion of the episode is dedicated to Quarles/Carpetbagger and Boyd sending each other messages, via beatings of underlings, co-opting of Oxy-script-writing quacks and exchanges of famous American quotes (Saul Bellow and Thomas Jefferson). What neither of them is counting on, or can foresee, is the involvement of Limehouse, who has eyes, ears, and very young women everywhere. Also: a huge chunk of Mags Bennett’s fortune.

This sprawling episode ends on a much more domestic — and game-changing — note, however. Winona is no longer standing by her man. After an early scene in which she stresses how disinterested she is in changing her night-owl, heat-packing ex-husband (and father of her unborn child), Winona rises and leaves a note on the door table.

MVP: Raylan. Sort of seems odd to not have bestowed this on the main character yet, but we try to spread the wealth here in the Socialist Republic of Recapping. That being said, I thought Olyphant was dynamite in the penultimate scene with Art — and in the final shot, alone, in the dark, with nothing but a “Dear Raylan” note to keep him awake. In the haze (or is it clarity?) that comes with being “full of enough tranqs to stop a rhino,” Raylan seems to imagine a different life for himself. But this revelation might have come one shootout too late.

Hat Content: Mild. Gotta admit, Raylan kind of swagged it out when he got out of his marshal’s sled with just a black T-shirt on. Brave new no-hat world right there.

Raylan’s Love Interest Threat Level: Totally different ball game. You can tell Raylan knows Winona’s exit is voluntary because he doesn’t immediately go apeshit and shoot four people when he finds her missing from their home.

State of Boyd Crowder’s Soul: Stressed. But not about the fact that he just iced Devil. No, Boyd’s way more worried about the competition from Detroit. Luckily, unlike Raylan, he has the love of a good woman to guide him …

Villain of the Week: Robert Quarles. McDonough was particularly good in his scene with Walton Goggins. Between somewhat implying that Boyd enjoyed the company of his fellow prisoner to the barely contained look of fury when Boyd calls him a “carpetbagger,” he gave the character a couple of different looks that we hadn’t seen before. (Notably: vulnerable, condescending, confused.) Looking forward to these two jousting for painkiller-king bragging rights.

Best Line:: “I don’t have time for that! I need cash! Where do people use cash!?” — Dewey Crowe, while robbing a home appliance store