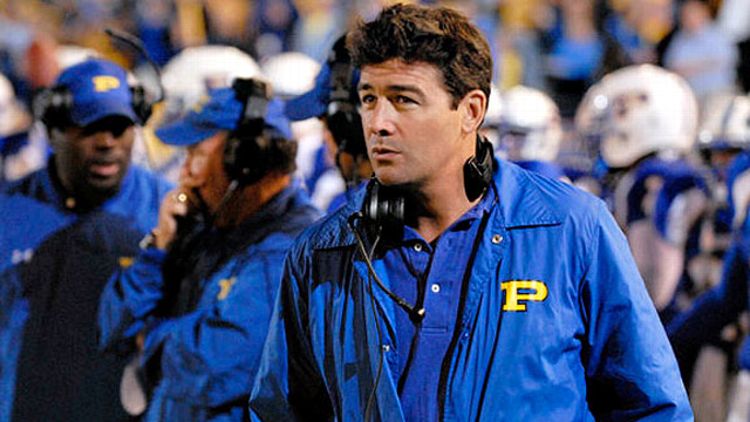 For a while there, every time a movie adaptation of a beloved TV show was discussed, it was our cue to roll our eyes and scoff and flick the back of one hand dismissively, or maybe even wipe a bunch of crap off someone’s table (whose? anyone’s) in protest of impossible expectations. Now, though, the momentum of expectations has totally shifted, thanks to the unlikely IRL existence of both the Arrested Development movie and the Party Down movie. In other words: This Friday Night Lights movie might actually happen?

Battleship’s director, Peter Berg, and its star, Taylor Kitsch, are now facing the inevitable questions about the Friday Night Lights movie on the press circuit, and they are answering with cold, hard facts. Says Berg to MTV:

“Jason Katims, who was our super talented show-runner, is about done with the script. You never know. So much of these things become scheduling. Kyle [Chandler] is busy, Adrianne [Palicki] is busy, Taylor is busy, Connie Britton is busy, but if we can get everyone in the same room at the same time, we all want to do it. We’re not done with Friday Night Lights. Also: “[Katims] has come up with a really great storyline that parallels what happened to [Texas Tech coach] Mike Leach, one of my heroes, a coach at Texas Tech who was unjustly fired and unjustly accused of mistreating a player with a concussion, which was proven to not have been the case. He’s now at Washington State getting ready for what I think will be a great redemption story. It would be critical that we get Kyle and Connie [onboard for the film] — we anchored the show around them — and then bring in Riggins, Tyra, Lyla and all other characters as we could get them. But the idea is to really revolve it around the coach.”

Adds Kitsch: “I loved the way I left Riggs. You never know. Maybe a little cameo or something. We’ll see if he even wants me in it.”

OK, first of all: Riggins referring to himself with an endearingly shortened nickname? If at one point during this press run Kitsch talks about himself in the third person as “No. 33,” I will raise one hand to the skies in victory. More important: While Berg is totally right that getting a bunch of actors already committed to a bunch of other projects sounds like a tall order, don’t you get the sense they’d want to try to carve out some time? And then again: Obviously, some of you would rather leave a good thing alone, and are satisfied with five seasons of FNL on TV, that other movie, plus the original book that we already have. And to those people who seem so uninterested in overconsumption, I say: Are you or are you not an American?! Anyway, stay tuned.

Shakira Was Brutally Attacked by a Vicious Sea Lion