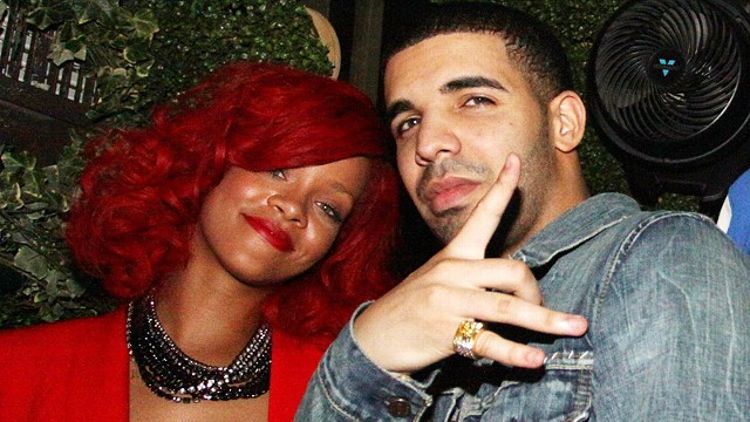 In the eternal high school that is the entertainment business, sometimes there comes a love triangle for the ages, one that generates an endless stream of speculative tabloid stories about what exactly the stars must be feeling and thinking. Usually the conclusion is horrifying: They’re just like us! Maybe it’s comforting for common folk to know that all the money, talent, and success in the world can’t protect you from experiencing heartbreak. No one goes through life without encountering rejection. Everybody plays the fool, sometimes. There’s no exception to the rule. Think of Angelina Jolie, Brad Pitt, and Jennifer Aniston; Liz Taylor, Eddie Fisher, and Debbie Reynolds; or Eric Clapton, Pattie Boyd, and George Harrison. For the triangle to be truly epic, all three should be about the same level of famous. Which brings us to Chriannake. Let’s play Internet detective/fan fiction writer. Picture it: 3 a.m., Saturday night. The clubs have closed and a tipsy Rihanna is staring at her phone, huffing that Chris isn’t texting her back, yet again. She saw those pictures from the other night, of him and that girl at the club holding hands in front of everyone. She knows how he likes to cruise the strip in his red Lambo, the one they just posted a pic in together. She knows what goes on when she’s out on tour. Rih pictures Chris driving the million-dollar car she was about to give him for his birthday, the one she outfitted with monogrammed red leather seats. She’d only ever pictured them riding around town in it together, but suddenly all she can see is him using it to pick up some club skanks the moment she’s out of sight. She tried making Chris jealous by taking pictures with another dude, a cute fan named Justin Laboy. Nobody knows whether Rih will give him the full My Week With Marilyn treatment, but yesterday Laboy may have been subtweeting Chris Brown when he wrote, “You’re in a relationship to be happy, to smile, to laugh and to make good memories. Not to constantly be upset, to feel hurt and to cry.” She thinks about how Chris’s new song is about her. The one he put out to capitalize on the press from their latest big fight, exploiting her yet again. The lyrics that say “Girl, we used to make love. When you called, I would follow. Now the only thing you love is a bottle,” and suggest that she’ll regret having “fucked up.” She’s the one who fucked up? What a prick. She thinks of their romantic selfie and feels like throwing up. The tears well up in her perfect green eyes, but something stops them from pouring out. She scrolls through Instagram, liking fan art of herself. “I wonder what Drake’s doing right now?” she finds herself thinking, and before she knows it she’s searching for “champagnepapi” and clicking on his profile to follow him. She chuckles thinking about how Drake just told East Village Radio that Chris Brown hates him because he’s so insecure. “Too true, Aubrey.” What if Drake is right? What if he really is more poppin’ than Chris? She tries to remember what it was like to kiss him. Was it really worth spurning Drake for Chris, who wasn’t really being a better boyfriend the second go-round? Plus, Drake had been looking really cute lately while Chris was more strung-out than ever. What if she were to let Drake murder her pussy again? She looks through his pics and stops on a picture of him playing Scrabble with his mom. She clicks the heart to like it. What if she fell back into his lap, and lived there? Would he treat her ass like a lady or a nominee? He’d just claimed he never thought about her, but no new friends doesn’t mean no old flings. A couple days later she scrolls through his IG again, to find Pain & Gain–type workout selfies, with emphasis on his biceps. Nope, thinks Rihanna. I just can’t do it. He makes me feel too embarrassed, as she breaks up the weed to roll another blunt as she watches the second season of Sex and the City for the billionth time on HBO Go, sighing about Carrie and Big. She notices Chris has unfollowed her on Twitter, and can’t help but wonder if it might be for the best.

Building a Mystery: Boards of Canada's Promotional Mindf--- and How to Like Things Now