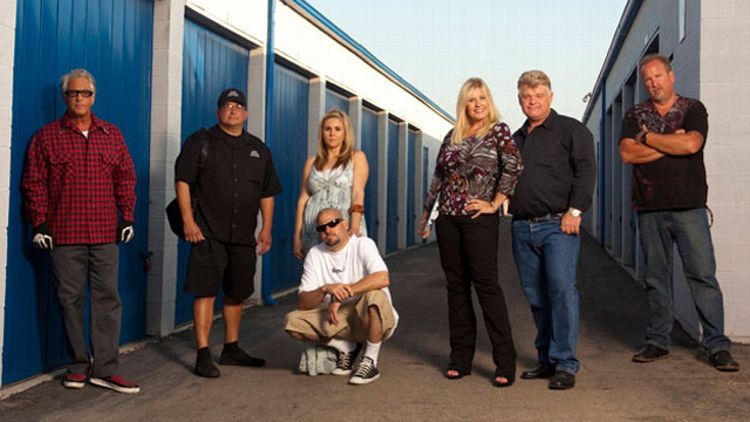 I’m a man of many silent protests. Currently, I’m silently protesting the neighbors who harass me about my terrible parking, the California tax board, the Apple Care program, American Idol, pants in general, and, of course, the producers of Storage Wars, who so unceremoniously dumped Dave Hester, my favorite “reality” TV show personality of all time, because of the courage he showed in trying to clean up the dirty world of storage-facility-auction-based programming.

If you’re a fellow Storage Wars fan, you’re probably familiar with the story. But for those who hate drama, comedy, and the American dream, here’s a quick primer: Storage Wars has always required a leap of faith. You must believe that someone would squirrel away an entire unblemished, in-their-original-packaging set of Star Wars action figures in a locker otherwise filled with plastic patio furniture and soiled gardening gloves. Or that they would see it fit to put their grandfather’s antique clock collection next to 15 crates of nursing scrubs, Soul Asylum CDs, and diet books from the early ’90s. You must also believe that those same Soul Asylum CDs would fetch a “five dollar bill” and that the patio furniture, which has since turned green, amounts to a “15-dollar bill right there.”

It was always a stretch, and as the show moved on to Texas (boo) and brought in new personalities, it became harder and harder to suspend one’s disbelief.

That’s when Dave Hester, American hero, came in and tried to clean up a dirty game. He revealed that the lockers had been “salted,” meaning that the producers had snuck in and (gasp) planted those same valuable items that could then be brought to antique appraisers in the greater Los Angeles area. For his bravery, he was fired from the show. I haven’t watched an episode since.

This morning in The Hollywood Reporter, the Storage Illuminati unleashed their latest smear campaign against Hester. The show’s auctioneers, Dan and Laura Dotson, had many things to say about Dave Hester and the credibility of his claims. As could be expected, these defenses are absurd. Let’s go through them one-by-one.

“I can say Dave (Hester) still comes to our auctions, even though there’s animosity that he’s not on the show. If it was rigged, why would he show up?” Laura Dotson, who runs auctions on Storage Wars with husband, Dan Dotson, told The Hollywood Reporter on Tuesday.

Ridiculous. He comes to the auctions because he knows they’re rigged. It’s like going to a McDonald’s during Monopoly season because you know they’ve stacked the pieces to give out as many free cars and extra value meals as possible. OF COURSE HE GOES BECAUSE THEY’RE RIGGED, YOU IDIOTS!

And this, from Dan Dotson:

“Hester is in a contractual dispute with A&E. He’s spewing stuff like I’m doing bid rigging and that’s the furthest thing from the truth… Every locker I’ve sold on Storage Wars is a licensed, legitimate unit,” he repeated Tuesday.

I see no evidence here except that people who stand up for right and get embroiled in corporate, legal bullshit are automatically discredited. Watch Erin Brockovich sometime, Dan. Maybe you’ll learn something. Also, anyone who has watched the show sees how you make eyes at Brandi every time she’s bidding on a locker. We all love Brandi and want to marry her, but that doesn’t excuse you from your crimes.

The Dotsons have advice for the Canadian producers as they cast for local treasure hunters, auctioneers and appraisers for Storage Wars Canada.

“The show is not just about what comes out of the box. It’s a character driven show. And Canada is full of characters, just like anywhere else. It’s just a matter of sifting them out,” Dan Dotson said.

Canada is filled with characters? No. The Kids in the Hall was overrated.

And that’s about it. That’s the big response the Storage Illuminati had to Dave Hester’s quest for justice. Dave Hester, of course, was not reached for comment because that’s what big media does; they shut you out and put out fluff from the two least likable characters on the show (and the feat of being somehow worse than Darrell is astounding). This reporter remains unchanged in his convictions. Keep throwing out the smoke screens, A&E, and Dave Hester will keep blasting through the alkali flats in a jet-powered, monkey-navigated YUUUUUP truck.