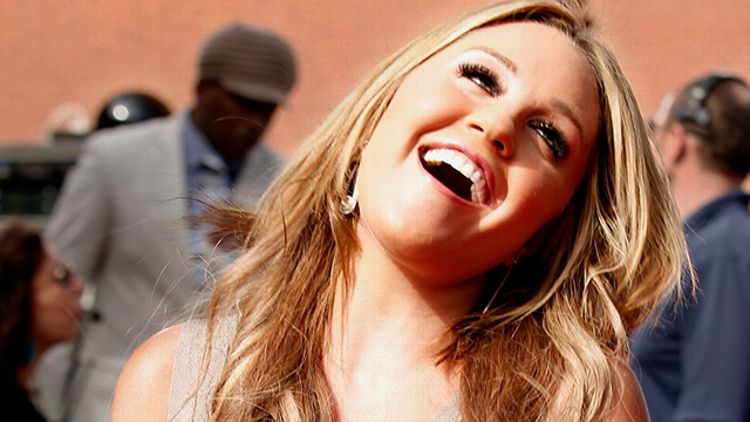 Amanda Bynes is the latest former child star to implode this summer, following fellow Valley girl Kristen Stewart’s cheating meltdown and the perennially imploding Lindsay Lohan’s latest mishap with the Chateau Marmont. Bynes has been charged for two hit-and-runs, one of which involved sideswiping a police car and then bizarrely asking President Obama to pardon her over Twitter. I started following Bynes on Twitter a few years ago, surprised to find out that an actress I had always assumed was sort of down-to-earth and tomboyish based on her onscreen image was actually a party girl prone to posting a million duck-faced self-takes and inspirational quotes about love.

She made Internet gossip headlines in 2010 for a series of over-share-y tweets about “how good it feels when someone knows how to love your body! I am having withdrawals from a certain guy lol :)” and this one, shortly thereafter: “So turns out I prefer chocolate over vanilla. Interesting.” This led to speculation that Bynes was talking about Kid Cudi or Drake, which she fueled with lyric tweets of both. She tweeted excessively, usually a sign that someone is feeling either manic or extremely lonely.

After her unnamed perfect chocolate lover left Amanda to withdraw in her cocoa-free hell, Bynes’s tweets got progressively weirder, more blatant, and occasionally veered into Fatal Attraction territory. She tweeted a lot about wanting to get married, praised “foxy married couples,” and promised she would admit who the mystery dude was as soon as they were “an OFFICIAL couple.” This seemingly never came to pass, and soon Bynes was tweeting about magic mushrooms and hair capes (“hair cape = a hip way of referring to your hair”), and shouting out to her “#divas,” before announcing that she was retiring at the age of 24.

Bynes came out of retirement a scant six days later, but serious tweets about quitting show business because “being an actress isn’t as fun as it may seem” hovered in the air. She continued to constantly post sexy self-portraits of herself wearing new outfits or cuddling her purse dog, Tiara Bynes, but mostly laid low until popping up again with this recent series of drunk-driving escapades. She haunted the Hollywood club scene all summer, and like many drunk starlets before her she was too stubborn or entitled to let someone else drive her around.

Until a few years ago Amanda Bynes seemed like a likable goofball who understood her audience. She catered to them with family-friendly rom-coms like What a Girl Wants and She’s the Man, made a watchable syndicated sitcom with Jennie Garth, and played Emma Stone’s bitchy rival in Easy A. The 26-year-old Bynes might just be facing a good old-fashioned quarter-life crisis, coinciding with a mid-career crisis, having worked since childhood and headlined her own Nickelodeon sketch comedy show at the age of 13.

You can’t blame Amanda for being burnt out or showing it. Who wouldn’t be fucked up about the idea that their career might have peaked while they were a kid? You can, however, blame her for being a bad driver who drives drunk. Bynes lost her license yesterday and faces sentencing in Van Nuys at the end of the month. Mostly this situation seems sad, with Bynes still fervently denying that she even drinks alcohol. I predict either a rehab stint, or Bynes and Lohan teaming up for a Lifetime remake of Thelma & Louise adapted by screenwriter Lana Del Rey.

Zadie Smith Asks: Do You Fools Listen to Jay-Z's Music, or Do You Just Skim Through It?