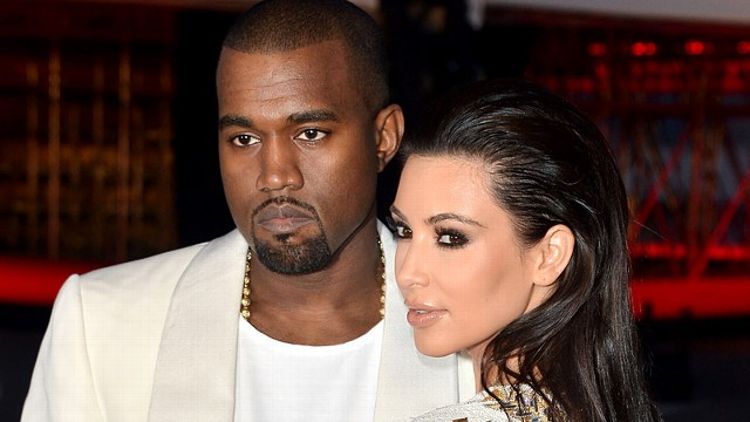 Kim K and Kanye: The couple went to Cannes together and “caught up, wandering the streets until 7 A.M., cherishing quiet time before the inevitable flashbulb frenzy at that evening premiere of West’s short film, Cruel Summer.” Fighting the rumors that their relationship is just a publicity stunt, friends say they “are the real deal.” Kanye is “playing for keeps. He waited for Kim. He knows they’re meant to be.” She comforted his anxiety over the response to his film, while “he kept brushing her cheek and kissing her.” While Kanye has gotten Kim to dress “more chic, with his advice,” Kim’s effect is that she’s “making him gentler. He isn’t so intense now.” Why hate? They’re perfect for each other.

Sean Penn: “I am constantly embarrassed by my own personality.”

Kelly Ripa: “Going to Fiji is not marriage. Going to Costco is marriage.”

Angie Harmon: “I can walk down any street and know when someone is wearing them because of the smell!”

Gabrielle Union on 50 Shades of Grey: “I’m a Scorpio and that ain’t gonna cut it. It’s a little too mild for my personal taste.”

Misc/Etc: “in a nectarine crepe” “punches, tears, and a food fight?” “The visibly exhausted star looks as if she had actually delivered a baby” “Latin for ‘testicles'” “Costa Rica is in Mexico” “nothing like the tomboy cop she plays” “constantly moving and hungry” “I love swimming in the rain!” “She’s intimidating” “She thought she’d be the fat girl who was alone forever” “I once had a birthday party for my cat” “I’m having a beautiful time” “a braless Miley Cyrus” “paint the toes on her prosthetic leg” “weekend mom” “the newlyweds had McDonald’s takeout in Rome” “someone to celebrate with when her scale hits that dream number” “I’m gonna get chocolate-wasted” “With a bloodbath!” “His pop-punk band: Lost In Kostko” “She found love in a cozy place”

Ashton and Demi: “In a shocking turn of events, Demi Moore and Ashton Kutcher may reunite! Following the couple’s blockbuster breakup and Demi’s heartbreaking bout with addiction, the celebrity couple are talking again — and Demi has indicated on Twitter that she’s willing to forgive her younger love’s embarrassing infidelities.” The couple interacted at “the 40th birthday of Rabbi Yehuda Berg, the cleric who married them.” They hugged for a long minute, and later Ashton made a speech where he said “I’ve made horrendous mistakes in the last year.” Ashton’s “playboy lifestyle has grown tiresome and he’s entertaining a reconciliation with his wife,” as encouraged by Demi’s daughter Rumer. Last week Demi favorited a tweet by Wiz Khalifa that read “We all make mistakes. Don’t let that be the reason you give up on somebody.” I’m not a psychic but I BET THIS WON’T END WELL.

Jessica Simpson’s Pushy Mom: “It’s a girl … and a postpartum meltdown for Jessica Simpson, who’s dealing with the after effects of pregnancy, a new baby and a war between her fiance, Eric Johnson, and her mom Tina.” Tina Simpson won’t leave the couple alone. She “moved into Jess’s mansion to help out” but “shows no signs of leaving the couple’s new nest” a month later. “Eric had no idea Tina was planning to stay with them for so long after the baby came. She’s completely taken over — bathing, feeding, and rocking the baby to sleep — and even ordering Eric to cook for her and Jess.” He ordered her off the property “so they could bond with their new baby, but Tina said Jessica needed help and she was staying. It’s very tense in the house right now.”

Gwen and Gavin on the Rocks: “With their marriage on the brink of collapse, Gavin Rossdale abruptly left his tour to meet with wife Gwen Stefani for a crisis talk. Emotionally, they are further apart than ever. It escalated into a full-scale blowup. They’re trying to decide whether they should have another go at it for the kids or split for good. They haven’t slept in the same room for months. It’s beyond frosty, and Gwen can’t take it anymore.” No doubt.

Party Girl Pippa Middleton: “Pippa Middleton is ready to party — if the price is right.” She has been doing club appearances for cash. “Pippa is a true socialite whose life revolves around posh parties. She claims to work two days a week for her parents’ company, Party Pieces, but that’s an exaggeration. Her real job is capitalizing on being famous.” While the royals think it’s beyond tacky, “clubs and publishers continue to throw big bucks at the woman with the world-famous derriere.” Do they throw the money directly at her butt?

Misc/Etc: “massive salads and chocolate cake and ice cream and pizza” “Madonna, sporting a snappy Panama hat” “melted into tears” “DJ (and chef!)” “straddling a pretty pony alongside her hunky escorts” “Free unlimited breadsticks!” “He’s a manipulative womanizer, and the show’s doctors couldn’t change that” “he can’t get by on his good looks forever” “He’s a generous tipper, as long as you are a cute waitress” “that little sex kitten came to life!” “She’s too shy and not mentally stable” “opposite sides of the VIP section” “it’s a really immature relationship” “he was obsessed, but he’s realized she’s sort of crazy” “model and bottle waitress” “see how he lied to his girlfriend” “I finally feel like I want to make out and fool around” “known for her yellow fetish” “COP WOMEN” “I’m attracted to the bad boy who puts me in my place”

Usher’s Custody Battle: In court with his ex Tameka Foster, Usher Raymond “appeared ready to fight for increased access to their two young boys. But the singer’s steely resolve quickly crumbled and he had to dab away tears after his ex-wife’s lawyers flashed photos of him in a nightclub last February and argued that he was an unfit father who only cared about partying.” A vulnerable Usher said of his sons, “They give me purpose. I used to be begged to come home. Now I’m begging to come home to be able to spend some time with them.” Tameka also brought up allegations that Usher cheated on her with one of the bridesmaids from their wedding. While Foster is “trying to paint Usher as a wild party boy with a huge sexual appetite, it’s backfiring and making her look bad.” A 2010 fight between Foster and Usher’s mother, Jonnetta ended when the 55-year-old Jonnetta “coldcocked Tameka and knocked her out.” Usher wants the focus to stay on the main issue. “Usher really loves his boys and just wants the best for them.”

Love Woes of Israeli Swimsuit Model Bar Refaeli: “Let’s put it out there. No one hits on me. No one flirts with me. It’s very sad, actually.” Is that why she was recently spotted flirting with ginger snowboarder Shaun White? Remember when a nationalist Israeli organization sent her a letter begging her to dump Leonardo DiCaprio and marry a nice Jewish boy instead? Shaun White is a goy, although his curly red hair is kind of Jewish.

Misc/Etc: “I like him, but he’s young” “pairs prettiest with a neat pony” “and now she’s a cop” “All hail the Lord of the Tools, Scott Disick” “She has to be naked in front of someone now” “If her hair was naturally that thick she’d never wear a wig” “World’s cutest tomboy!” “the emotionally fragile star had looked tense and exhausted” “the choice no woman wants to make: her mother or her man” “finalizes plans for her fairy-tale wedding” “He’s all the things you want a partner to be” “funky L.A. crib” “goes to college in Rhode Island” “struggled with dieting issues since the sixth grade” “He needs to learn how to support me” “romance product” “her naked face!” “looks younger than the immortal teen vampire she plays” “immune to ugly days” “really into brown lipliner”

Jessica Simpson: “It’s funny to be at your heaviest and feel the most confident.” She is already on a diet. “Jessica isn’t stupid. She knows that new photos of her will immediately be compared to her old body. Jessica hasn’t had to focus on losing weight in a long time. She’s just been happy, living her life and now losing weight feels like her job, because it is.” Cool job! Her workout plan includes “walking from room to room with the infant in her arms” instead of “sitting in a chair cuddling.”

Daniel Radcliffe Wants to Play Marty McFly: “Sort of short and quite hyperactive — that sounds like me!”

Kourtney Kardashian and Scott Disick: “Kourtney has just had it. Scott has not helped at all with her pregnancy. He even finds reasons not to accompany her to her doctor appointments. Last month, he spent a whole week in Miami, partying until 4 a.m. at various clubs.” She’s jealous of sister Kim’s new love. “Kanye is the perfect boyfriend, doting on Kim and so well-mannered and charming.” LOL I’m sure. During Kourtney’s baby shower, Scott was “hosting an event at Harrah’s” in Atlantic City, “where he was reportedly seen, apparently inebriated, vomiting into a garbage can.”

Nina Dobrev on the Perfect Vampire Face: “You have to look seductive and sexy, yet at the same time scary and mean.”

J.Lo and Casper Smart: “She shouldn’t have to write him a huge check to sleep with her.” Does she work for Jaguar? Oh, no, wait, I meant Fiat. An upcoming Oxygen network show “will focus entirely on the couple’s professional relationship” as he choreographs her world tour. She’s cutting off his “$10,000 weekly allowance — and it’s not because he won’t take out the garbage.” I’m sure a reality show will patch things right up! “Jennifer thinks he’s taking it for granted. Everyone told her he was just using her for her money and connections and now she’s ready to put it to the test.” Casper likes to “take his ‘boys’ to dinner at Mastro’s and then get them bottle service at whatever Hollywood club, and not invite Jennifer. He’ll come in with bags and bags from Nordstrom, and she’s always expecting that there will be a little something for her, but there never is.” Sunset Boulevard!

Misc/Etc: “happily weeping” “tipsy at noon” “her choker shines” “addicted to drama and attention” “noticeably bumpy!” “She likes partying too much” “as if chiseled out of marble” “cast a coy glance” “her first topless scene” “grunts while laying down” “We are swimming in babies over here” “Guy Fieri, who served as best man” “bad-boy baby daddy” “gets her country rock on” “bloodshot and wobbly” “My family’s going to come first and my career will come second” “She’s had the same friends since she was in kindergarten” “from a yawn to a yeehah” “fresh-scrubbed appeal” “girlish accents of peach and pink” “Southern gal” “pastel makeup and big ol’ hair” “skin so glowing she could ignite a fire” “in the projects you have no opportunities” “The night ended with Stevie Wonder performing and a chocolate high-heeled boot cake!”