The ‘Rocknroll’ Nuptials, Kimye Manicures, YOLO Fights … and Other Absurdities From This Week’s Tabloids 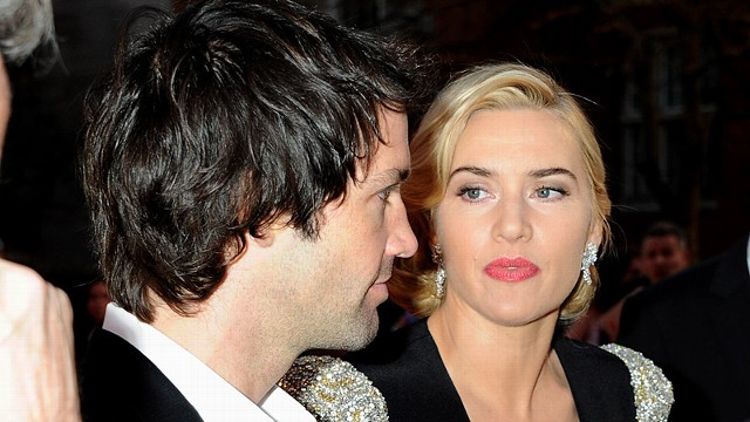 Kate Winslet & Ned Rocknroll: Kate Winslet married Ned Rocknroll, a.k.a. Richard Branson’s nephew with the incredibly dumb (self-chosen) name. “Call her Mrs. Rocknroll!” I will but I won’t like it! The couple of a year wed before “a small group of friends and family.” Perennial bachelor Leonardo DiCaprio “walked the bride down the aisle” and shattered/stoked the dreams of a trillion Titanic fangirls. Ned is “really attracted to her mind. She’s mature, and he feels he can learn so much from her. It’s sexy!” Is it just me or does that sound a little bit like shade? Oh, well, wishing all the best to the Rocknrolls.

Drake Invented YOLO: According to Drake, he coined the phrase, or at least the acronym. Try telling that to The Strokes? Or the Henry Fonda crime drama from 1937? Or Johann Strauss, who titled a waltz “Man Lebt Nur Einmal!” (“You Only Live Once!”) back in 1855, quoting Goethe. You heard it here, Goethe coined “YOLO” in the 1770s for his play Clavigo. YOLO!

Jennifer Aniston & Justin Theroux in Mexico: “Their daily routine: yoga in the morning, afternoon tanning and moonlight margaritas.” Sounds kinda like GTL to me. YOLOUX!

Dame Maggie Smith Recalls Meeting Shirley MacLaine: “Their first exchange was at an Oscars catering table in the ’70s. Smith recalls that when MacLaine lost, ‘You tucked right into that chocolate cake and said ‘Fuck it, I don’t care if I’m ever thin again.'” I love both of these women so much (also: cake cake cake cake).

Posh Spice: “No one wanted to date me. Everyone sort of wanted to brush my hair.”

Nicole Richie on Taylor Swift: “I don’t even know who she is singing about, but I hate him and anyone else who’s ever upset her.”

Ryan Seacrest & Julianne Hough: “We’ll do competitions of who can hold the plank the longest!” Yikes?

Misc/Etc: “Crimson tide” “a source says he wasn’t serious” “Keep Your Clothes On” “Biebs, stop being a baby, baby, baby” “sustained dancing and cheerleading injuries” “I was an altar boy” “I play the harmonica while I drive” “I was a witch” “Hard-Bodied Couple!” “I’m not reading a book at the moment. I’m actually writing one.” “Tobey Maguire got his pies” “She now sees it’s important to be married” “Red Lobster Lovers” “on a walk under the redwoods” “still bond over boogying” “Gone With The Wind fabulous” “He’s dating a young singer” “it’s an Ayurvedic thing” “I think his favorite is when I’m skinnier” “Why put it in my domain?” “banana pudding” “If I eat dairy I get fat like, instantly” “a dried fig with brie” “I’m so immature!” “He married an old cougar!” “I do look pretty gross!” “didn’t mesh with the pups” “I hate clubs!” “I love playing the bad girl” “in vintage Metallica”

Did Miley & Liam Get Married? “Miley knew if she tweeted a picture of herself and Liam wearing rings, everyone would go nuts. She is constantly coming up with new ways to keep everyone interested in her. She is terrified that people will forget about her or ignore her. Liam has no idea how much she needs attention from people. It’s getting worse and worse!” There might be a grain of truth to this story. Miley has been stunting a lot lately on social media. “She isn’t exactly busy with her career these days.” Hey, she has a new album coming out soon that Pharrell claims is going to revolutionize pop forever by combining Dirty South rap with country music. XOXO, a dedicated Miley stan.

J. Lo Demands All White Everything: In Boca Raton filming a movie, “She gave the hotel manager a rider demanding that the entire building have only white flowers, inside and out. She also insisted that all extension cords and phone cords in any room she would be entering be white.” What about the M&Ms though?

Misc/Etc: “ICEMAN IS BACK!” “another Hollywood blonde” “after not just a hot new girlfriend but also a means to extend his dwindling 15 minutes of fame” “She’s ready to have his baby but doesn’t want to scare him off” “he’s such a small dude but Jef is supercocky” “calling all swaggy singles!” “splashed out on a new skinny wardrobe.” “She is full of drama and always has trouble with her men” “she froze her eggs in case Mother Nature doesn’t comply” “Russell Simmons and his 27-year-old model girlfriend” “getting (face) down in the sand” “sounds like a slam dunk!” “Queen of 3D!” “She let them air out, hammertoe and all” “her success has ruined her marriage” “a case of bad cop, no cop!” “every boyfriend goes to Cabo!” “Look at these bodies, look at that skin.” “It’s only fair that he gets to buy himself treats.”

Bethenny Frankel & Jason Hoppy: The couple announced their divorce, and Frankel has been in an emotional tailspin. “I didn’t see Bethenny eat anything” says an eyewitness who saw Frankel at a restaurant on Christmas Eve. “She looked really skinny.” The next day she was spotted at Matsuhisa in Aspen. “She was very, very thin.” Frankel has made no secret of her struggles with an eating disorder, but claims she is no longer dealing with it and has figured out how to lose weight naturally. But it’s also possible she’s just transferred her obsession over into compulsive exercising. Her daughter Bryn spent the holidays with Jason Hoppy and his family. A witness who saw her shopping at Prada said “She looked tired and much thinner than on TV.” Bethenny pushes ahead promoting her Skinnygirl brand of alcohol and a new talk show, but at what cost? “This is a way some women cope when they feel out of control in their lives. They restrict what goes into their mouth to maintain some kind of control.” Control is “important to a self-described Type A personality like Bethenny.” Hopefully, she’s healthier than this report suggests, or taking steps to be.

Chris Brown & Rihanna: He’s already cheating on her, of course. Not just with his ex-girlfriend Karrueche, but with randoms. “Chris cheated on her with blonde, blue-eyed executive assistant Sommer Gargan after meeting her through a mutual friend. He slept with her two different times at his recording studio. They’ve been texting ever since, even when he’s been with Rihanna.” Chris Brown sucks so fucking bad. “Rihanna is obsessed with Chris. Everything she does is about him. Nothing will get in her way of being with Chris.” Did Rihanna turn into Taylor Swift? “Chris has been telling Sommer that Rihanna is smothering him and he can’t take it anymore.” I knew you were trouble Chris! Rihanna “plays it like she’s in control, but she’s not. Everyone tells her this is going to end badly, but she doesn’t listen. She’s young and strong-headed. There’s no changing her.”

Leonardo DiCaprio & Lana Del Rey: They were just at the same Lakers game, but obviously they should date. You know you want that to happen.

Leslie Mann: “Megan Fox just has great boobs. Better boobs than I’ve seen in my life.” Well, luckily you can buy ’em just like Megan Fox did if you want them, I suppose. But also, no need, Leslie Mann. You look great.

Misc/Etc: “The fact that he filed right before Christmas really cuts like a knife.” “competing with four fiercely funny ladies” “the world’s worst-kept secret” “pretty schnoz” “Baby got quarterback!” “Mariah returns to the early (and curly!) 90s” “gross for kissing my puppies” “daughter or date?” “Time for a mouth stretch!” “the woman she has publicly accused of being a liar, gold digger and former stripper” “the holiday is about duty, tradition and protocol” “modern and strong-willed wife” “PUFFY BUFFY” “a too-tight cropped top exposed her belly” “She eats raw vegetables and raw fruits and I don’t know, straw?” “Of course she’ll be annoyed” “People Take Her Seriously” “Beyoncé, 31, is even more beautiful without makeup” “her beauty secret is good lighting”

A Teen Mom Proposal: On Twitter, no less. Ryan Edwards tweeted, “Marry me!” to Maci Bookout. She suggested he “had been hacked,” but he persisted: “Its means that i want to get on one knee an tell you how much i love you.” She responded by tweeting, “Imma kill u.” Love in the 21st century! Insiders claim that “Ryan is an idiot.” They say he told friends “how Maci is going to be set for the rest of her life with her new show and that he made a mistake ending things with her since she is going to be the one making money — so he decided to fake-propose to Maci. He thinks they should fake a wedding for the money and divorce right after.” Ah, the old Kardashian-Humphries routine. Maci “was not amused.” Her response? “We Are Never Ever Getting Back Together.” Courtship! It’s just like a Jane Austen novel!

Channing Tatum on Impending Fatherhood: “It’s really for us guys to say, ‘I want like 15 kids.’ Jenna will be like, ‘Well you better get another wife!'”

Misc/Etc: “He could have just about any woman he sets his broody blues on.” “She had a fairly breezy pregnancy.” “courtside Christmas cuddle” “not pictured at far right, Kanye West” “hugely bespectacled” “(in the red dress)” “it lasted a good hour” “a trio of Manhattan bachelors who make a pact to live to the max while they’re still single” “Keep your undies on!” “We all have essentially the same character defects.” “Rod Stewart served as best man.” “both sentimental and logical.” “Terry Richardson has offered to take the pictures” “this insect is revered for its ability to morph from a lowly caterpillar” “Katie Holmes can’t believe Tom Cruise took a woman salsa dancing” “It would be like, ‘I’m not 17 anymore.'” “When I see people reading it on planes and stuff I’m genuinely creeped out.” “Gym, Tan … Goodbye” “stashed it in her cleavage for safekeeping” “She feels her sexiest when she’s really lean” “Conor Kennedy is back on the dating market.”