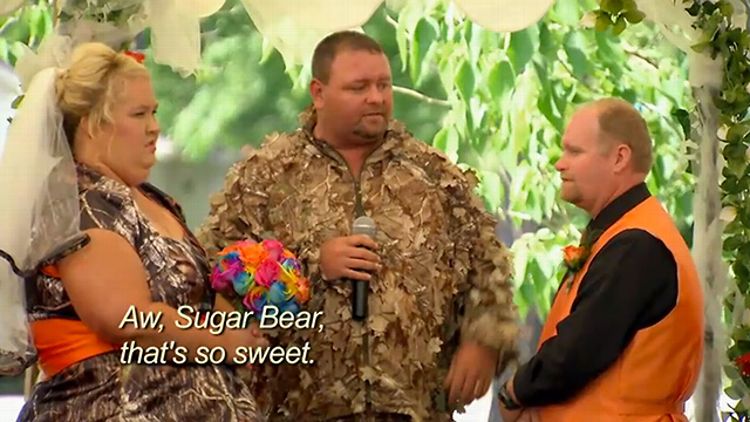 The Season 2 finale of Here Comes Honey Boo Boo was some of the greatest television ever created. The entire season built up to the commitment ceremony between June and Sugar Bear, and the highly anticipated episode didn’t disappoint. While many people only watch the show to mock a family of proud backcountry rednecks, even the most callous viewer had to understand the significance the commitment ceremony held for the entire Honey Boo Boo family unit.

We live in a country where the majority of marriages end in divorce. Some children are born out of wedlock. Other children are abandoned. Divorce or separation of any kind can cause lifelong psychological consequences that may never be resolved. It’s a vicious cycle, creating emotionally damaged people searching for love in unhealthy forms.

Upholding traditional values has become largely impossible because “times have changed.” The depiction of nontraditional families in shows like The New Normal and Modern Family highlights the status of the traditional American nuclear family. While it is common to laugh at the untraditional makeup of modernized nuclear families, the reality is that there are even more challenges for raising children who are aware that their family is “different.”

The night before the wedding, June asked Sugar Bear to sleep in a tent outside of their home. It seemed a bit odd, because they’ve been together for nine years. Why would she kick her husband out the night before the wedding? On top of that, the wedding was in their own yard. Practically speaking, sleeping outside in a tent made no sense at all. Sugar Bear willingly obliged, because he understood that small traditions are what make events special.

Tradition doesn’t always make sense. However, it is what keeps us connected to the past. As society continues to progress, we lose tidbits of traditional practices. There isn’t enough time to do the small things that we’ve seen bastardized on television, or by other people who are busy broadcasting their “traditional moments” on social media. Tradition means committing to the moment, and committing to the people with whom you choose to share the moment. If life is just a series of inconsequentially passing moments, why not make a few of those moments more special than the rest?

Sugar Bear’s and June’s commitment ceremony was the perfect way to formally unite their family. Sugar Bear fought through tears as he read his vows. He understood that his family was finally official. The girls had a visual representation of unity between their parents. June could no longer sit on the fence, afraid of commitment. Without a tradition like marriage, you don’t create a formal experience that allows your friends and family to celebrate your bond. This family deserved this moment.

Yes, they are still a lewd, gaseous group of humans, constantly ingesting food that fuels their obesity. They might not look or act the way you want America’s favorite family to look or act. But the final episode solidified Here Comes Honey Boo Boo as one of the all-time great pieces of existential art. We are all the same, confronting our absurd existence in society, looking for a genuine connection with another person.

Here Comes Honey Boo Boo raises another question: “Are we in a golden age of television?”

Many claim that shows like Mad Men, Breaking Bad, The Wire, The Sopranos, Friday Night Lights, Homeland, and other narrative-driven dramas have defined this age of television. However, I still believe the real golden age of television is the reality TV era. These shows are easy to produce with the right subject matter, and they provide a form of media that deeply resonates with the audience. We can’t get enough of these real-life personalities. Just a few days ago, June Shannon announced that the show will be back for Season 3. There is another chapter to write in the lives of Sugar Bear’s clan.

Some say that TLC has lost its way and no longer deserves to be called “The Learning Channel.” I wholeheartedly disagree. With every episode of Here Comes Honey Boo Boo, we learn more about the American condition than any history book, Wikipedia page, or museum trip could ever teach us.