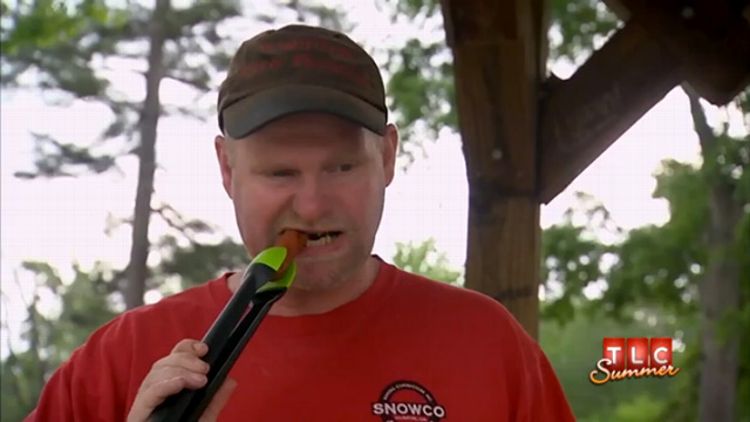 The latest episode of Here Comes Honey Boo Boo, entitled “Get Her Chins Vacuumed” is the typical lead-in episode to a series-turning event. The season has been dominated by June and Sugar Bear’s commitment ceremony, and this episode largely served as filler before the wedding episode. This is the luxury a popular series has when there is a rabid, built-in fan base. The writers and directors can take artistic liberties, not actually forcing plot points. Instead, a seemingly “pointless,” slow-building episode actually immerses you in the lives of the characters. Only in a few more episodes will we know why we were taken on the journey.

This is why Here Comes Honey Boo Boo is the crown jewel of TLC programming, despite the recent push of Breaking Amish, Raising Fame, and even Crown Chasers. Viewers see the Thompson-Shannon family as an authentic portrayal of the joys and problems in the American familial unit.

The family decides to take a break from the stress of wedding planning to spend time in a local park. Most scenes are set in the family’s crowded house, with oversize furniture crowding the living room. The sisters often congregate on one large bed. This setting gives the show a claustrophobic feel, but it also sets the stage for joyful scenes when the family leaves the home. They can all just breathe without the constant fear of a train passing by. In a way, the train is an ever-present character in the show, lurking in the background to further fuel the chaos in the house.

It shouldn’t be a surprise that the family elects to grill hot dogs. The beef and pork frank has been looked down upon because of the recent rise of turkey and chicken sausages. Whether they are sweetened with apple, or blended with spinach and feta, the consumer sausage industry has adapted to mounting health concerns because of diets with too much red meat. However, consumers should look more closely at the ingredients, understanding that dark meats in chicken and turkey could end up having more calories than beef or pork franks.

The visit to the park opens up an important dialogue about the obligation for governments to allocate and develop public space for residents to congregate. Free-speech advocates claim that after the Occupy Movement, governments will indirectly censor the people by limiting public space in which to protest. Urban planning and city development has massive social, financial, and psychological ramifications that we are only beginning to understand.

Every city, county, and state has a legitimate challenge when it comes to merging the natural terrain with the needs of citizens. Public parks in large cities like New York City, Chicago, New Orleans, and San Francisco are beautiful and functional. However, suburbanites often see public parks as underutilized patches of land that would be better served with a new frozen custard chain. To these residents, public parks are where homeless people sleep, stray animals live, and innocent people get mugged. All citizens need to understand that we can redefine public space to actually solve society’s problem, activating it for social good.

Somehow “public” has become a controversial and potentially even derogatory term. It implies “free” or “discounted” when talking about health care coverage, as if the lowest class of people are somehow exploiting the government. Public restrooms are seen as dirty, disgusting places that aren’t even worthy of our excrement. Attending public schools means that you received a free education. We don’t see “public” as a term that represents a sense of duty to the greater good of our neighbors. We see it as free, open, and dangerous.

Suburban and rural areas make lots of land and acreage more affordable, diminishing a city’s incentive to invest in public space. Homeowners should instead buy more land, fueling property tax income. They will have more space, and stimulate the local economy with the construction of fences, garages, and home additions. Instead of continuing to isolate ourselves on large lots of land, we need to embrace urban living, finding walkable solutions that diminish our carbon footprint.