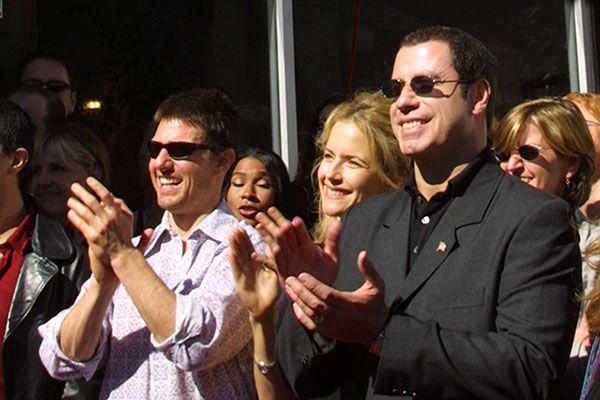 Back in February 2011, The New Yorker published Lawrence Wright’s “The Apostate: Paul Haggis vs. the Church of Scientology,” one of the more expansive and informed explorations of the mysterious workings of the organization to date. But that was just the beginning. Wright, the first-ballot journalism Hall of Famer behind the masterful The Looming Tower: Al-Qaeda and the Road to 9/11, has now expanded his research into Going Clear: Scientology, Hollywood, and the Prison of Belief, a book that might just prove to be the defining account of L. Ron Hubbard’s minions and all they have wrought.

Ahead of its publication (it’s out January 17), THR has excerpts from Going Clear‘s Hollywood-centric portions, which focus on the church’s two biggest names: John Travolta and Tom Cruise. If you do have the time, make sure to read both pieces, which are fascinating and sad and thoroughly unbelievable. (By that point you’ll probably want to pre-order the book, too.) But just because the guy in the cubicle over is probably already talking about that time Tom Cruise did a Risky Business on a Scientology sea-faring vessel, we went ahead and picked out some of the craziest bits.

You thought John Travolta got cast in Welcome Back, Kotter because he was a handsome and talented young man? You thought wrong!

Travolta began taking the Hubbard Qualified Scientologist Course at the Celebrity Centre with about 150 other students. He confided to the teacher, Sandy Kent, that he was about to audition for a television show, Welcome Back, Kotter. Kent instructed everyone to point in the direction of ABC Studios and telepathically communicate the instruction: “We want John Travolta for the part.” At the next meeting, Travolta revealed he had gotten the role of Vinnie Barbarino — the part that would soon make him famous. “My career immediately took off,” Travolta boasted in a Church publication. “Scientology put me in the big time.”

Travolta’s relationship with Scientology would later sour, after his personal church handler, Sylvia “Spanky” Taylor, fell out of favor with church higher-ups. They reportedly prevented Travolta from seeing Spanky, even while using her to curry favor with the young star.

Travolta had agreed to loan Taylor the print [of Saturday Night Fever, for a Church screening], under one condition: that he could see her. The missionaries decided that as long as Taylor got the print, she could meet Travolta for dinner after the screening. (Travolta’s attorney denies that there was an agreement to visit Spanky in exchange for his personal copy of Saturday Night Fever) … The screening took place on a Saturday night. As soon as the movie was over and the credits were rolling, several Scientology executives escorted Taylor to an office and told her to call Travolta and cancel their date for dinner the following night.

So how come Travolta’s still in the church? Well …

Bill Franks, the Church’s former executive director, told Time magazine that in Franks’ opinion, the Church had Travolta trapped. At one point, the star sought assurance from Franks that his private confessions wouldn’t be used against him. In truth, intelligence officers inside the Church had already been directed to gather material — called a Dead Agent pack — that would be used against Travolta if he turned.

OK, on to Cruise, whose relationship with the church — more specifically, with Church top dog David Miscavige — is much more buddy-buddy.

Cruise … fell under the spell of Miscavige’s commanding personality. He modeled his determined naval-officer hero in 1992’s A Few Good Men on Miscavige, a fact that the Church leader liked to brag about.

Miscavige heard about [Cruise and Kidman’s] fantasy of running through a field of wildflowers together, so he had Sea Org members plant a section of the desert with them; when that failed to meet his expectations, the meadow was plowed and sodded with grass. When a flood triggered a mudslide that despoiled a romantic bungalow specially constructed for the couple, Miscavige held the entire base responsible and ordered everyone to work 16-hour days until everything was restored.

Cruise is hands-on, carrying out some of the Church’s auditing himself. A young man named Marc Headley had Cruise as an auditor, and this is taken from his account of the proceeding.

“Do you take a lot of bee pollen?”

Headley had no idea what he meant.

“Never had bee pollen?” Cruise said excitedly. “Oh, that will do the trick for sure.”

He led Headley to his Yamaha motorcycle and rode the two of them to the base canteen. It was dinnertime, and the canteen was filled with Headley’s gawking co-workers. Headley was surprised to learn that there was bee pollen for sale, though he says Cruise didn’t pay for it; he just grabbed it, and they went back to the conference room. This time, Headley passed the metabolism test, though he privately credited a Danish he ate over the bee pollen.

Oh, and you know that scene in The Master where Lancaster Dodd just about has Joaquin Phoenix steaming out of his ears after several intense hours of wall-touching? Wright’s book says that stuff really happens. And it’s Cruise playing the Dodd part.

According to Headley, Cruise helped him through the Upper Indoctrination Training Routines. “Look at the wall,” Cruise would have said, according to Hubbard’s specifications. “Thank you. Walk over to the wall. Thank you. Touch the wall. Thank you.” … These procedures went on for hours as Headley robotically responded to Cruise’s commands. “You learn that if you don’t do what they say, they’ll just ask the same questions 5 million times,” Headley recalled.

This part is the most important:

In July 2004, Miscavige hosted a 42nd birthday party for Cruise aboard the Scientology cruise ship Freewinds. Musicians (including Miscavige’s father) played songs from the actor’s movies as clips played on giant screens. Cruise himself danced and sang “Old Time Rock and Roll,” reprising his famous scene from Risky Business.

This part is the second most important:

Miscavige convinced Cruise that he and Tom were two of only a handful of truly ‘big beings’ on the planet. He instructed Cruise that LRH was relying upon them to unite with the few others of their ilk on earth to make it onto ‘Target Two’ — some unspecified galactic locale where they would meet up with Hubbard in the afterlife.

There’s much more over at THR, for those who can’t get enough of this kind of thing: