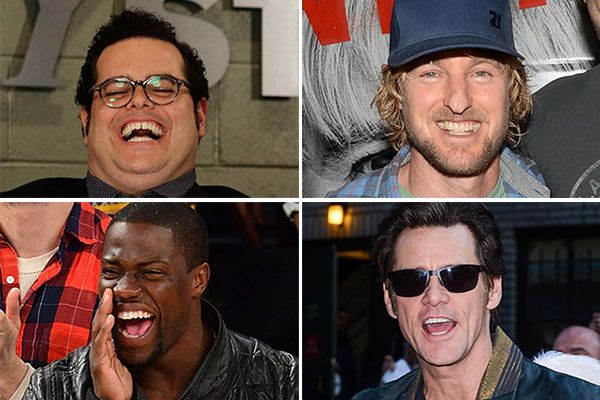 Are you ready for some hard-hitting Hollywood news? Specifically, Hollywood news about the casting of unexpected — but, to be frank, not all that loopy — lead pairings?!! Buckle up, bozos: We’re going for a ride.

First up: Kevin Hart and Josh Gad are linking up for an untitled comedy from The Break-Up‘s Jeremy Garelick and Jay Lavender. Says The Hollywood Reporter, “The film follows a man named Jimmy (Hart) who provides best man services for men who don’t have best friends. Groom Doug (Gad) is a socially awkward guy who finds himself without a best man. He makes up not only a best man, but nine groomsmen, and eventually seeks out Jimmy’s help to create his fictional friends.” Yeah, I agree, it’s kind of weird they’re remaking I Love You, Man so soon. But that movie did rule pretty hard — Jobin, am I right? — so let’s maybe let it slide.

Second: Owen Wilson is joining Jim Carrey in the comedy caper formerly titled Loomis Fargo, to be directed by Napoleon Dynamite‘s Jared Hess off a screenplay from Up All Night creator (and now Modern Family writer) Emily Spivey. Says Deadline, “Pic tells the fact-based story of a disgruntled armored car driver” — that’ll be Carrey; no word on who Wilson is playing yet — “who is persuaded to risk it all for love, money, and extravagance. He and his cohorts liberate $20 million from a bank vault. They promptly double cross him, and as the driver’s left alone on the run in Mexico while they live the high life, he becomes obsessed with getting even.”

As recently as 2011, Danny McBride was telling GQ about tentative plans to adapt the story with his dude Jody Hill: “These rednecks robbed Loomis Fargo for over $17 million … And they would have gotten away with it, except they stayed in the town they were living in. They literally moved from trailers into the richest neighborhoods in town, lived like kings, bought their wives tit jobs. Jody wants to make it like a southern Godfather.” Now McBride and Hill are executive producers on this project, having apparently done a rewrite of Spivey’s original script. I gotta say, I’d rather have seen Hill’s original “Southern Godfather” than a Carrey/Wilson version. Kenny fuckin’ Powers as a befuddled bank robber? Ah, what could have been.

Freak Show & Tell: Something to Put All That 'Otherkin' Stuff Into Perspective