Freak Show & Tell: Something to Put All That ‘Otherkin’ Stuff Into Perspective 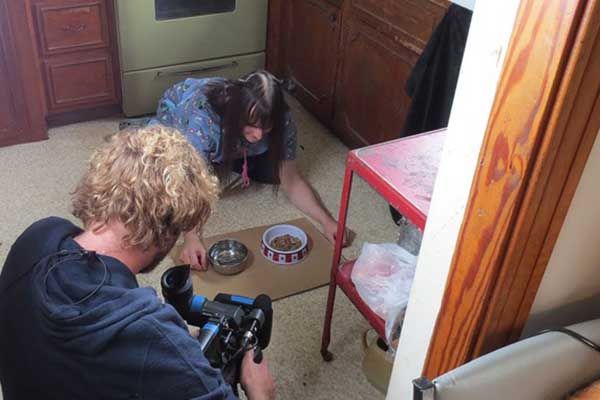 Who Is This Now? Boomer.

Why Are We Watching Him? He enjoys living as though he were a human-size dog.

How Did He Get Here? As a kid, he saw the movie The Shaggy D.A., which apparently flipped some kind of weird switch in him.

What’s the Grossest Thing We See? For the camera, Boomer (a.k.a. Gary) eats some dog food, as he is wont to do from time to time. If you’ve ever smelled wet dog food, you may experience a stomach-turning sensation watching him eat it, and yet somehow the worst thing is when he comes up for air, and you see the gelatinous sheen and one chunk of dog food–grade chicken smeared on his chin.

What Have We Learned? Boomer/Gary is currently unemployed, and I think we end up with a pretty good idea why.

Why Are We Watching Her? She’s establishing her place among some of Atlanta’s poshest and most self-regarding moms.

How Did She Get Here? She’s friends with main terrible mom Emily, which is why she seems to be so close to the center of all these Atlanta-based events even though she lives in Birmingham.

What’s the Grossest Thing We See? While the series title suggests that its subject is mothers of, you know, human children, Nicole N. doesn’t have kids. Instead, she has a horrible little toy dog (maybe a Pekingese? I don’t know garbage dogs), Summer, that she pampers like a child. Nicole N. has bought Summer a whole wardrobe of outfits. Nicole N. irons Summer’s fur with a flat iron. Nicole N. pushes Summer around the neighborhood in a special mesh-sided dog stroller.

What Have We Learned? One of the other moms (of a human child) has business cards that identify her profession as “Ledger’s Mommy,” so it’s a race to the bottom with this cast.

Who Is This Now? Casey.

Why Are We Watching Her? Her weekend in the Hamptons is turning out not to be as much fun as she might have hoped.

How Did She Get Here? Since she still lives at home, like all her friends, she still socializes with all the same people she did in high school, including the ones she hates.

What’s the Grossest Thing We See? Admittedly, Casey did once have a legitimate beef with Erica: When they were both seniors in high school, Erica swooped in on Casey’s boyfriend, and got him to take her to prom instead of Casey. However, Casey is 27 now. So when their mutual friend Chanel invited them both to this house in the Hamptons and warned Casey that Erica was going, Casey should have either declined to come or figured out a way to be adult. Instead, she openly gives Erica the silent treatment — like, Erica politely offers her wine and Casey acts as though she hadn’t heard anything and waits for someone else to offer — before finally snapping at Erica at dinner to shut up.

What Have We Learned? Who knew I’d be more annoyed by childish behavior (Casey) than by ignorant rhapsodizing about the importance of meditation (what Erica was yammering about when Casey told her to stow it)!

Who Is This Now? Farren.

Why Are We Watching Her? She’s letting her employees make human-resource decisions she should be making.

How Did She Get Here? A reality-show producer approached her to see if she might want to take an unorthodox approach to dealing with her personnel problems, and for some reason, she agreed.

What’s the Grossest Thing We See? In order to inflame the chosen staffers into eating each other (figuratively) (so far), a video presentation shows the salaries of those who may be up for termination. Farren’s father, Tom, who founded the company and still works there, makes a third more than the next highest-paid employee in the mix, and more than double what most of the rest are paid — including Rise, his wife and Farren’s mother, who has worked there for 30 years and makes less than $34,000 a year. He pays his son Logan, a video editor who’s been at the company three years, just over $19K. The lowest-paid employee in the presentation — sales rep Cameron — makes $15,360 a year. Admittedly, he’s been at the company only four months, but isn’t that a job that should pay more than minimum wage?!

What Have We Learned? Farren is lucky their ignorance of how cheaply they’re all treated has kept her employees from running her out of town wielding torches and pitchforks — though, of course, that may yet happen next week.

Who Is This Now? Jessie.

Why Are We Watching Her? She’s disputing a charge at a beauty salon.

How Did She Get Here? Jessie’s friend Ariel is getting married (Jessie’s in her wedding party), and has come to a somewhat fancy salon to get a manicure.

What’s the Grossest Thing We See? Other than the embellished French tips Ariel has chosen? (Girl: no.) Well, Ariel first embarrasses herself in front of her manicurist by announcing that she didn’t bring enough cash to pay for her $65 manicure, so the manicurist takes pity on her and gives her a 30 percent discount. When the lady at the front desk, not knowing about the arrangement, kindly asks for the balance and backs down when the manicurist confirms Ariel’s reduced rate, Jessie leaps to Ariel’s defense, trying to act as though the lower charge is due not to the discount that everyone now acknowledges was offered, but because Ariel’s manicure was done shoddily and that she shouldn’t be charged full price. Ariel and the rest of the bridesmaids soon join in, verbally abusing the staff at the salon until they are asked to leave.

What Have We Learned? (1) Typically, salons are the sites of some of the worst, most entitled behavior people can exhibit, so I’m shocked to find out it’s possible to cross a line that could get someone ejected from one. (2) My nail place charges $11 for a manicure and it’s perfect every time and yet there are chumps who go as high as $65?!??!?!?!

Who Is This Now? Jim and Elizabeth.

Why Are We Watching Them? They’re trying to get a patient, of sorts, to participate in an exercise.

How Did They Get Here? WeTV, having found a new way to punish women they’ve identified as Bridezillas — namely, to follow them into their troubled marriages — has hired Elizabeth and Jim to provide group couples’ therapy.

What’s the Grossest Thing We See? The exercise Elizabeth and Jim have concocted has two phases. First, they tell each of the boot camp participants to write a letter to his or her partner, laying out their impressions of their marriage, good and bad. Then, they make one half of the couple get into a coffin on a fake funeral set, and make his or her partner read the letter about him or her. The idea is, duh, to make the letter-writer reconsider the complaints in the letter, by changing the context so that the letter is transformed into a kind of mostly mean eulogy. The needlessly literal nature of the exercise aside, some people will naturally be hesitant to climb into a coffin and pretend they’re dead, but if it’s important enough for, in this instance, boot camp participant Melissa to overcome her fears and do it, Jim and Elizabeth should have a more compelling argument to make to her than that everybody else did it. Ultimately, Melissa flat-out refuses to do it, which I guess means she and her husband, Chris, are for sure getting divorced???

What Have We Learned? Jim and Elizabeth are charlatans.

Who Is This Now? Ella.

Why Are We Watching Her? She’s telling us about a terrifying calamity she experienced.

How Did She Get Here? After having the bad luck of growing up in Australia, she decided to spend an afternoon being towed on a surfboard behind a motorboat, during which activity she was savagely attacked by a sea lion.

What’s the Grossest Thing We See? It’s all reenactments, so what we see is fake, but what we hear of Ella’s ordeal is pretty horrible: The sea lion tore into the side of her neck (requiring 60 stitches to close) and even inside her mouth (40 stitches). It grazed the wall of her carotid artery. She spat up five teeth. And then there’s her vivid description of the sea lion’s filthy brown mouth, and the narrator’s addition that they’re known to eat their young.

What Have We Learned? Since we know by now never to go to Australia, what I learned this week is that though they look cute, sea lions are sickos.