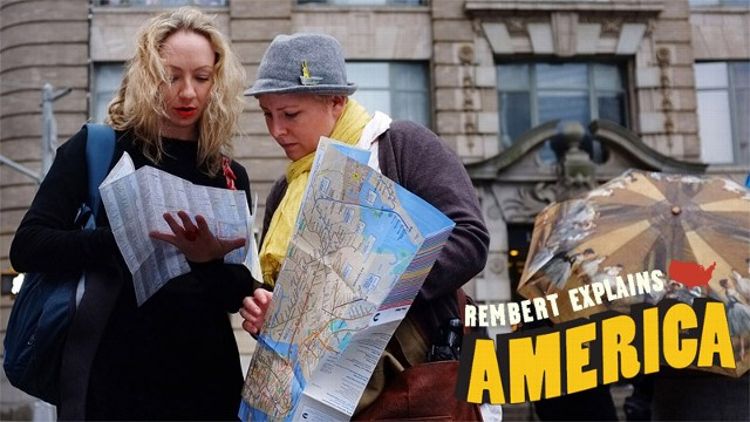 When one thinks of “America” and “Scavenger Hunt,” certain things may pop into one’s head. Like “a souvenir from the Statue of Liberty.” Or “a picture of Route 66.” Or “find Lee Greenwood and take him to a diner and make him sing his songs throughout the meal while you weep into the American flag napkins that his bald eagle brought along.”

There’s nothing wrong with finds like these. But this is the Great American Scavenger Hunt. And that adjective changes everything.

As noted, for three months, I’ll be on the road, driving around and writing stories. When not doing these two activities, a great deal of time will be dedicated to ducking into thrift stores, antique shops, goodwill establishments, and maybe even the homes of innocent bystanders, looking for an important, ever-growing list of items.

• Tyler Perry’s business card
• Three FUBU “05” jerseys in three different colors
• A Jeep Grand Wagoneer for sale for less than $2,000 (I’ll then buy it)
• A key to a city
• A personalized date night dish recipe from Patti LaBelle
• A football signed by Papa John
• Jalen’s bat
• Tie-dye overalls
• A Steve Urkel string doll
• A jersey from every character in NBA Jam TE
• Authentic Rasheed Wallace Hawks jersey
• External bat hookup for Ken Griffey Jr. Presents Major League Baseball
• 50 different magazines with Selena Gomez on the cover
• A Jodeci T-shirt
• Dave Chappelle
• A Roc-A-Fella Chain
• A Justin Timberlake–Jay-Z tour rider
• Every issue of Jet magazine from ’85 to ’94
• Luther Vandross bedazzled concert tee
• A 3-D printing of anything
• 15 Pieces of Atlanta ’96 Olympics gear
• A piece of American flagwear from Lee Greenwood’s closet
• A VHS tape containing an episode of MTV’s Rock N’ Jock
• Two Nike Challenge Court Andre Agassi tennis polos
• A signature of a woman named Phyllis on a picture of a different woman named Phyllis
• A Bear Stearns duffel bag
• An Enron T-shirt
• A pink Skip-It
• A sousaphone
• A document proving that the Illuminati are real
• A solar system mobile that includes Pluto
• An issue of Highlights magazine with completed puzzles
• A pair of stiletto Jordans

Right now, there are 33 items on this list. As time goes on, certain things will (hopefully) be crossed off and other desired items will be added. But nothing can be deleted. And, of course, they all must be found, or the strength of this country and the resolve of our allies will most certainly crumble.

This isn’t just a solo project. I need help in finding these items. A great deal of help.

If you know where to find an item, know who has an item, or are the one with the item, drop a line to that e-mail. There — and only there — will cordial, mutually beneficial, occasionally threatening trade arrangements be made, hopefully ending in me walking away with a Jim Jackson Mavericks jersey and you, potentially, a Guy Germaine letterman jacket. Just a hypothetical example …

I look forward to hearing from you.

Freak Show & Tell: Something to Put All That 'Otherkin' Stuff Into Perspective