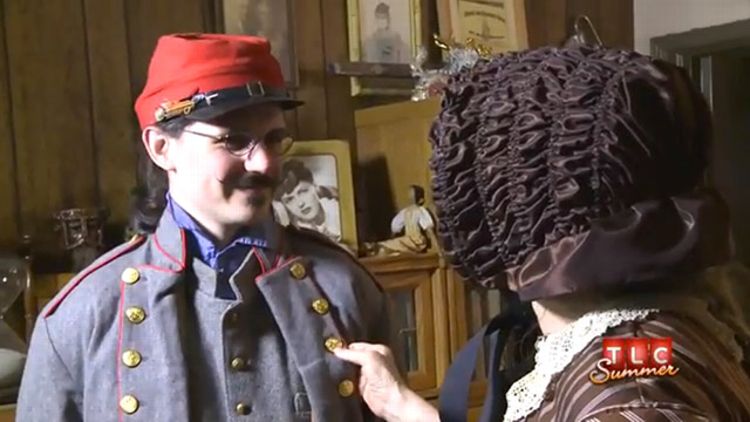 Who Is This Now? Jane and Andrew.

Why Are We Watching Them? There is a 31-year age gap between them, with Jane the elder of the couple.

How Did They Get Here? They met at a course offered by the Landmark Forum, an organization that has been described as cultlike. They started dating not long afterward and have now been married for several years.

What’s the Grossest Thing We See? Jane got Andrew involved in her Civil War reenactment hobby, which is fine. And if they want to repurpose the 19th-century costumes for cosplay in the boudoir, they’re both consenting adults, but I wish they hadn’t done it in front of cameras.

What Have We Learned? Just because you look and sound like Eleanor Roosevelt doesn’t mean you can’t get down.

Why Are We Watching Him? He’s running a drill to test the emergency-response readiness of everyone who may someday live with him in his bug-out bunker.

How Did He Get Here? He’s pretty sure that if the country doesn’t adopt extremely stringent austerity measures, the economy will collapse and society will devolve into chaos.

What’s the Grossest Thing We See? Steve’s insistence upon referring to people who receive government assistance as “entitleists” is pretty appalling, but the drill is worse. Steve uses 40 pounds of explosives to blow up a truck and then cackles over the degree of destruction he wreaks. He also enlists his son, Steven James, to use live ammunition to cover the back entrance to the property. Steven James is 8.

What Have We Learned? You should talk to your kids about … other kids in their class who might be planning to take up arms against their fellow citizens someday soon?

Why Are We Watching Him? He’s getting ready to leave his inpatient couples therapy program.

How Did He Get Here? Everyone else in the course has finally stopped putting up with his B.S. and he can’t handle it.

What’s the Grossest Thing We See? After running away from Dustin like the big strong man that he is, Joe returns to a common area in the house and sits down next to Temple, another participant in the program, to try to get her to agree that he was right (in last week’s episode) to have ended a screaming match with a third patient, Heather, by throwing water in her face. Temple calmly says she just wants to understand what happened. Joe’s version of events (which is different from what we actually saw, needless to say) was that he innocently asked Heather why her boyfriend, Dustin, never wears shoes in the house, including to group therapy sessions, and that she came after him unprovoked. When Temple points out that Joe is a large man and that Heather is a tiny woman, and that Heather wasn’t exactly unprovoked in that Joe called her and Dustin “white trash,” Joe doesn’t deny it — and, in fact, repeats it. When Temple refuses to get onboard with Joe’s assessment of Heather and Dustin as “idiots” because they were on The Real World, Joe gets increasingly angry at Temple for not being on his side, finally announcing that when everyone was in the van last night, Dustin “touched [Joe] inappropriately,” as though, if that had happened, Joe could have kept it to himself for 30 seconds, never mind overnight. The conversation devolves even further from there, because Joe Francis is garbage.

What Have We Learned? Joe Francis is disgusting in every way it is possible for a person to be disgusting. It’s quite remarkable, really.

Who Is This Now? Brandon.

Why Are We Watching Him? He’s about to get married and things aren’t going so hot.

How Did He Get Here? He started dating his fiancée, Aleshia, five months ago; from what we can reasonably surmise based on what we see of her behavior, she bullied him into agreeing to marry her before he could think better of it.

What’s the Grossest Thing We See? Brandon tells Aleshia that he’ll have to postpone whatever she’d planned for them to do on a particular day because his mother has made him a doctor’s appointment. Aleshia, who apparently hates Brandon’s family because they don’t want him to marry Aleshia, chalks this up to Brandon allowing his mother to baby him. (In fact, Brandon says in an interview that the previous day he’d had an asthma attack bad enough for him to have to go to the emergency room, and that the ER doctor who treated him told him to follow up with his primary physician.) As Aleshia’s anger and abuse escalate, Brandon storms out of the apartment and takes refuge under a bush on the lawn outside, where he rocks back and forth and sobs. Brandon is 23.

What Have We Learned? Brandon is in way over his head.

The Kardashiad, Part 24: The Longer They Think They've Eaten Placenta, the Better