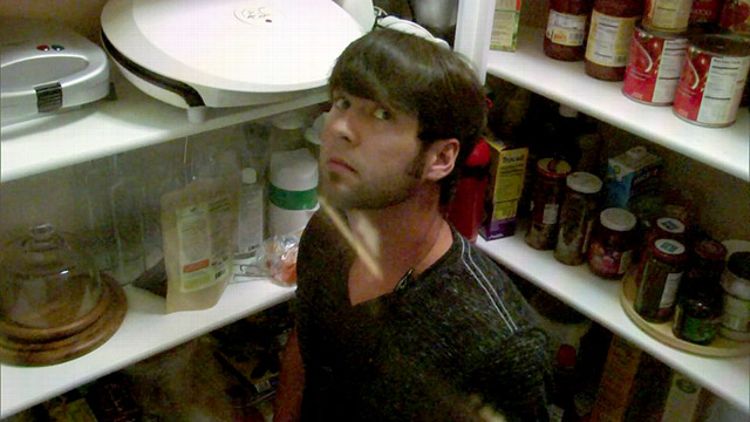 Who Is This Now? Melissa.

Why Are We Watching Her? She’s pranking Brandon, an old foe.

How Did She Get Here? Melissa and Brandon hooked up for “a little over two years,” but because she was overweight, he hid her from his friends — in one pivotal instance, he literally hid her, ordering her to stay in his room when some of his friends came by. Now she’s lost weight and wants to make him feel bad.

What’s the Grossest Thing We See? The show’s producers set up a scenario in which Brandon is supposedly picking someone up, with hot female twins there while he waits at the location; when one of their boyfriends comes home, the girls make Brandon hide in a pantry. So far, so literal. When Melissa comes out and explains what’s happened and that she expects an apology, Brandon cheerfully refuses: “I’m me, I’ma do me, I’m gonna be me.” But Brandon giving bros everywhere a bad name is not the worst part. The worst part is when he refuses to apologize, Melissa says, “I was thinking that maybe we could fix our friendship.” WHY?! Why in the world would she want this tool anywhere near her life?

What Have We Learned? TWO YEARS she spent with this worthless piece of crap? More than a dietitian and trainer, Melissa needs a therapist to help her work on her self-esteem.

Who Is This Now? Lisa.

Why Are We Watching Her? She’s giving a group of young women a lesson in emergency childbirth.

How Did She Get Here? Having delivered more than 200 babies in “Third World countries,” according to castle patriarch Brent, Lisa is the perfect person to teach his daughters what they will need to know when any of them is pregnant after the apocalypse.

What’s the Grossest Thing We See? Lisa brings along a real human placenta in a Ziploc bag and flops it onto a towel for Brent’s daughters to inspect. She also says that in a survival situation, they could eat one!

What Have We Learned? The longer this series goes on, the more obvious it becomes that if Brent’s dire predictions come true, the living will envy the dead.

Too Young to Marry? (Oxygen)

Who Is This Now? Mariluz.

Why Are We Watching Her? She’s ruining her son Angel’s birthday party.

How Did She Get Here? Angel is gay, and Mariluz has not accepted his sexuality.

What’s the Grossest Thing We See? When Angel puts his arm around his fiancé, Kevin, Mariluz whines from the end of the table for him to stop, and in an interview declares that Kevin (at 19) is too young to know what he wants and just thinks he’s gay because it’s trendy. She tells Kevin not to “disrespect” her by feeding Angel a bite of cake off his fork. Kevin shrugs. “That’s just how couples act,” and Mariluz tells him, “Well, you’re not a couple. Your mind is wrong.” When Angel begs her to calm down, she prays over him until he takes off to cry in the bathroom. Later, when Angel and Kevin break up, and Angel (for some reason) goes to Mariluz for consolation, she tells him, “God did not make gay people.”

What Have We Learned? God did not make Mariluz.

Who Is This Now? Stone.

Why Are We Watching Him? He’s working on a strategy for victory at a poker night with his fellow stay-at-home dad friends.

How Did He Get Here? In a STUNNING COINCIDENCE, Stone’s ex can’t look after his 5-year-old daughter Danica, so Stone’s going to have to bring Danica to poker night. I mean what are the odds?!

What’s the Grossest Thing We See? Stone is bummed at first to be breaking the first rule of Guys’ Night — NO KIDS — but then he sees the upside. “Casinos hire hot waitresses to distract players. But they don’t have anything on my sweet little Danica.” He just compared his 5-year-old daughter to a hot casino waitress.

What Have We Learned? Thanks to A&E, Stone’s ex has a great exhibit to use when she sues for full custody of their daughter.