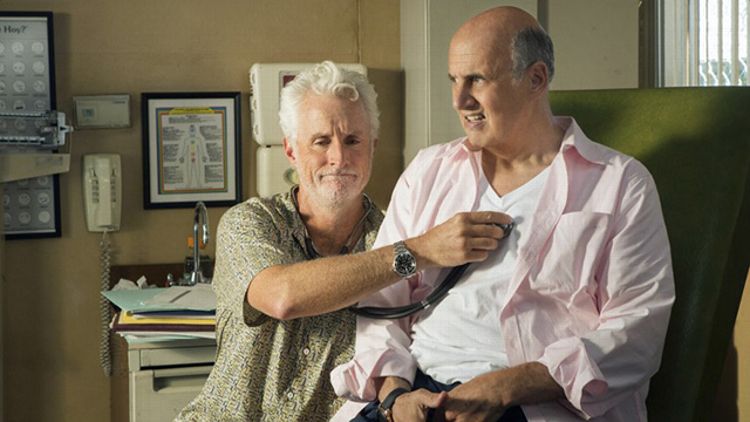 People forget that when Arrested Development debuted, it was marketed as a comedic spin on the financial scandals of the time — Enron, Global Crossing — not a multilayered postmodern meditation on father-son relationships, identity, and avian behaviors. I remember feeling almost betrayed by the series circling back to quasi-ripped-from-the-headlines comedy with its Bluths-build-in-Iraq story line; Wee Britain was about as far as I wanted the Bluths to travel.

But in retrospect, and upon repeated viewing, the “light treason” subplot doesn’t just illustrate the show’s fearlessness, it reveals itself to be the through line of the first three seasons, long before Buster joins Army. “Light treason” is, in fact, mentioned in the sixth episode of the first season; the 14th episode of that season is called “Shock and Aww,” and features an adoring collage homage to Saddam Hussein; and Gob announces that the company’s slogan is “Solid as a rock,” in Season 2’s second episode. The show satirizes greed and self-centeredness, and reckless intervention, mostly on the level of personal relationships, but the punch lines apply to international ones as well.

All this is to say, of course there’s a Herman Cain character — Herbert Love, mentioned previously but actually present in “Double Crossers” — and I suspect that the show will again prove itself to be just as much a story of wealth as it is a story of a wealthy family.

This particular episode is about George Sr.’s wealth (and, it turns out, health).

We open with his plucky attempt to bribe the conservative black Republican congressional candidate with a catchy slogan and simplistic platform — Love (Terry Crews) — to back the construction of a wall between Mexico and the U.S. (Lucille’s idea.) George bought border land after discovering what seemed to be plans for just such a wall. He needs to ignite political will for it in order to turn over the property (now a sweat-and-squeeze corporate retreat) for a not-very-quick profit.

Love is interested in more instantaneous gratification, in both the commercial and carnal senses. He tells George that he loves “greenbacks and redheads,” and for the $50,000 George happens to have (originally intended to pay for Maeby’s plastic surgery), he will make the wall the third part of his three-point plan. Before, he had been thinking of ginning outrage over a different social issue: “If you reach into my pocket to pay for your birth control, I get to reach into your pocket to put it in.” (Somehow I had forgotten until now that in addition to being an economic policy charlatan, Cain was a serial creep.)

But all is not well back at the sweat lodge: It turns out that the land George Sr. bought is not perfectly situated on the border; it is 15 yards into Mexico. That’s what you get for relying on Buster’s maps.

Now George wants to keep the wall from being built but Love demands too high a price, “a flip-flop flat fee.” George finds himself unusually upset over this turn of events, even as his twin, Oscar, begins to relish both “getting out of that sweaty old box at the compound” and getting into the pants of Lucille. Even Barry Zuckerkorn can see that George “hadn’t been acting like himself,” but rather “like a little girl … and not in a good way.”

Lucille and Oscar arrange to send Gob to the Mexico property, hoping that employment there will set him up to take over the company should they need a scapegoat. Gob arrives at the Father B camp (he swerved to miss an ostrich) having given up his career as a “gentleman honey farmer,” but not having given up his bees. They are sick bees, victims of colony collapse disorder (a real thing!), and shortly they cause the collapse of the corporate retreat colony.

George Sr. isn’t feeling so well himself. He avails himself of the services of the colony’s disgraced anesthesiologist, Dr. Norman. He’s feeling more sensitive than usual, and lacks a sex drive. Dr. Norman has a fix: “The Hopi Indians believe that this spot here, when manipulated, can create sexual feelings.” That spot, of course, is George Sr.’s penis — and it is as immune to manipulation as Herbert Love is without a check.

Dr. Norman, mystified (and really cooking on some pharmaceutical-grade narcotics), suggests that they might “explore some supernatural, or high-concept, premises.” For instance, has George Sr. phrased any wishes badly lately? It hits George Sr. like a bolt of lightning, or a beak out of the blue: This change in circumstances is exactly what the Ostrich God (from the second episode) warned him about! “The strong will become the weak! The weak will become the strong!”

Will George Sr. be able to rise again? Will his penis? Dr. Norman sends him to, of course, Orange County Imaging, suggesting that he “ride an MRI machine to climax.” There’s a store around the corner where he can pick up some magazines to aid him in that quest.

The bodega where George gets his magazines to get his rocks off is where we earlier saw Gob accidentally drop off his drugs (the forget-me-nows lost in Episode 1). The magazines themselves are the ones he attempts to gift to Michael in Episode 4 — a gesture that leads to the heart-to-heart conversation in which he tells Michael he will sign over rights to his life story. Only now we learn that he asks Michael, as a big-shot producer who “knows a lot of people,” something in return: Get Love to come out against the wall. “Would you do that for Daddy?”

George Sr. then pays a visit to Lucille in Coast Guard jail; she points out that he’s “gone puny again.” Doesn’t he realize that they will be ruined if the wall isn’t at least begun? She advocates getting Love to come out against the wall after they get enough of it up to trigger the government to pay for the land. What’s more, she wants George Sr. to get Gob another job.

George Sr. calls on Michael to hire Gob — maybe produce movies that won’t get made, or houses that no one will buy, anything “where his incompetence won’t be out of place.” Michael resists but Gob is, like Michael, already on his way to Sudden Valley. And is carrying around a giant crucifix in his car. It’s both a part of his Christian magic act and a memorial to the dearly departed mailman Pete, whose death sparked Michael’s decision to start his life over in Phoenix in Episode 1.

They both deliver some empty boasts — fraternal one-upmanship being a constant in the series. Another constant: Once alcohol is introduced into the equation, competition becomes cooperation. Michael reveals that he’s dating Ron Howard’s daughter and that his relationship with George Michael is strained. Gob suggests that he impress George Michael with a visit to the Ealing Club — and Gob will even make the invitation.

Meanwhile, George Sr. is still scrambling to get on the right side of the wall deal. A few days later, he shows up at Cinco de Quatro, hoping to influence Love’s speech there. He runs into the now-roughed-up Michael, who is getting set to give his speech (delivered in Episode 1) to Lucille “Two.” Michael is getting ready to have sex for money, and George Sr. is waiting to learn the results of his testosterone test as well.

But it’s George Sr. who runs into Lucille “Two” first. She is upset about his campaign donation to Love — and that she might have a connection to the company that’s building the wall. She storms off: “I can’t stand to be seen with you.” George Sr.’s insecurities surface: “It’s because I’m fat, isn’t it?”

He continues on to his dockside appointment with Dr. Norman, who is getting rid of some pot pipes and cheetah sedatives. It turns out his testosterone is “off the charts” — below the bottom. He has the testosterone levels of a baby, but the estrogen levels of a woman in menses.

The show is finding its biorhythms as well, I have to say. Or else it’s me that’s changed.

Here’s a concrete change: “Callbacks” will now be “Jokes From Seasons Past,” and “Call-forwards” will be “Jokes From the Season Present,” a tweak that I hope addresses the at-once-ness of the episodes. (How can there be call-forwards if everything is happening at the same time?)

Jokes From Seasons Past (add the ones you espied in the comments!):

Jokes From the Season Present