The Movies of 1994: The Buried History of ‘Bad Girls,’ a Would-be Feminist Western Turned Flop 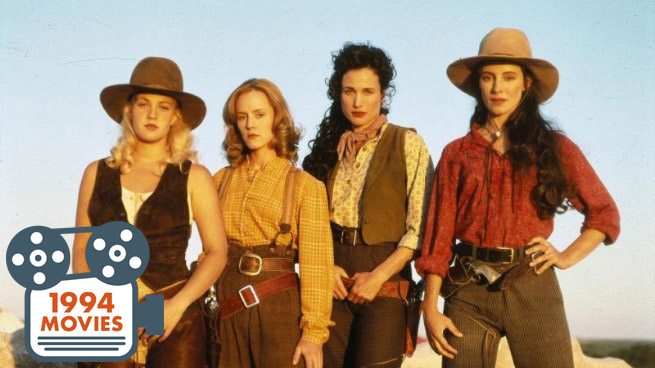 In the year 1994, the movies were great. Greater than usual. Blockbuster or indie, rom-com or action thriller, there was something indelible about so many of them. Throughout 2014, Grantland will look back at some of the most memorable, beloved, and baffling releases of that magical time around their 20th anniversaries. Today: Molly Lambert on Bad Girls, released April 22, 1994.

When I set out to watch Bad Girls, the 1994 Western directed by Jonathan Kaplan, all I really knew about it was that it was a notorious flop and Drew Barrymore was in it. After watching the movie and finding it pretty mediocre, I delved into its production history and found out that there was a far more interesting backstory. Bad Girls was originally conceived as a feminist Western, to be directed by Tamra Davis with a script by Yolande Turner and Becky Johnston. Two weeks into production, Fox Studios took Davis off the movie and replaced her with Kaplan, hiring new writers to redo the script on the fly as the film shot. The reconfigured movie was a mishmash of Western genre tropes with a slight tinge of Thelma & Louise–style girl power, all in service of the story of four prostitutes turned outlaws in the Old West.

Los Angeles native Tamra Davis was a music video director who had made a name for herself directing clips for acts like Hüsker Dü, N.W.A, and Sonic Youth. Davis’s debut feature, Guncrazy, was a remake of the original 1950 noir film, starring Drew Barrymore as the teenager who kills her sexually abusive stepfather and hits the road. Coming a year after ’91’s Thelma & Louise, Guncrazy is another feminist reclamation of the girls with guns genre. Bad Girls was intended to hit similar themes on a larger scale. According to those who have read early drafts of the script, it was originally a revisionist Western about women and sexual violence. One key scene from the screenplay, in which one of the heroines bites off a guy’s genitals while performing oral sex, prompted a studio meeting in which Davis recalls a group of male executives expressing their extreme discomfort with the scene. Johnston, who had written The Prince of Tides and Under the Cherry Moon, and would go on to write Seven Years in Tibet, saw her name moved all the way to the bottom of the list during rewrites.

When Davis was taken off Bad Girls and replaced, the studio claimed it was because she was falling behind schedule. But those familiar with the history of the production believe Davis was replaced for more insidious reasons; Bad Girls was too overtly feminist, and the studio freaked out. As a form of damage control, Fox brought on super-producer Lynda Obst for the reboot. Obst was upbeat at the time, but later admitted that the studio meddling that included her hire had ruined the film. Dermot Mulroney, who plays the male love interest in Bad Girls, was very open in an interview during the press run, saying, “The studio was dissatisfied with the way things were going. When they see dailies about women just sitting around, and they paid for this big action film … ” It seems this was the real reason why Davis was fired. Tamra Davis had intended to make a neoclassical indie Western about women in the West, and Fox was expecting a straightforward Hollywood Western, like Young Guns with girls. How this miscommunication got far enough down the line for the movie to start shooting and Fox to fire Davis is a mystery, but it’s hard not to feel regretful that Davis didn’t get to realize her vision in a non-studio setting. Bad Girls could have been great.

Instead, Bad Girls ended up as schlock, which is particularly disappointing because a Western about four prostitutes swearing vengeance has so much potential. Apparently if you want to make action movies about women on quests for revenge, you must be named Quentin Tarantino. Jonathan Kaplan is a competent B-movie director, but hiring the director of Night Call Nurses and The Student Teachers to helm what was originally going to be a movie about sisterhood and sexual subjugation seems especially cruel. Bad Girls is a campy romp that’s never very much fun. Madeleine Stowe has the most to do as tomboy Cody Zamora, Andie MacDowell is better than usual as a Southern belle madame, Mary Stewart Masterson wears prairie dresses, and Drew Barrymore shows her boobs.

Tamra Davis went on to be successful as a director anyway. She directed CB4, Billy Madison, and Half Baked, which is a solid résumé that you absolutely cannot deny. She’s been directing episodic TV for the last decade. The last non-documentary movie she made was the Britney Spears vehicle Crossroads. She is married to Mike D of the Beastie Boys, whom she met directing the video for “Netty’s Girl.” She recovered nicely from the Bad Girls debacle and managed to demonstrate that a woman could easily direct several rad movies beloved by the overly coveted tween-boy demographic, but what happened in 1994 still smarts. You know how women never get to direct summer tentpole movies? That doesn’t happen by accident. The story of Davis and Bad Girls is a cautionary tale, but I’m not sure exactly what the lesson to take away from it is. I can’t help but imagine an alternate world where Davis could have made Bad Girls her own way, and where stories about women on the big screen were not so rare in general, especially when it comes to Westerns about avenging gangs of prostitutes that bite guys’ dicks off.

“We have a centipede that is made of prison inmates, and they’re all hooked together. When you see this, you will never want to commit a crime and go to prison. It’s REALLY horrible.” - Eric Roberts on 'Human Centipede 3'