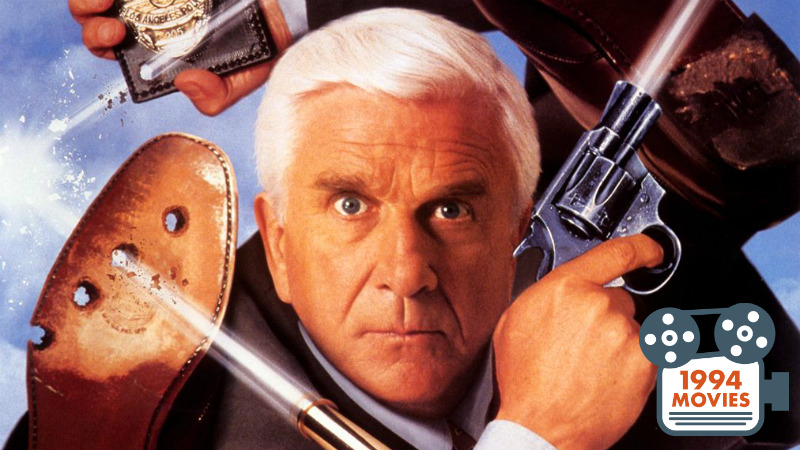 In the year 1994, the movies were great. Greater than usual. Blockbuster or indie, rom-com or action thriller, there was something indelible about so many of them. Throughout 2014, Grantland will look back at some of the most memorable, beloved, and baffling releases of that magical time around their 20th anniversaries. Today: Amos Barshad on Naked Gun 33 1/3: The Final Insult, released March 18, 1994.

From: Sean Fennessey
To: Me

“Weird question: Do you care about this movie at all?”

Weird answer: YES I DO.

2. I don’t know what it is about me that led Sean to guess I’d have some kind of feelings about peak Leslie Nielsen. (I didn’t ask. To be quite honest, I don’t know that I can handle the answer to that question.) But the fact is, the entire Naked Gun series — the brainchild of ZAZ, a.k.a. David Zucker, Jim Abrahams, and Jerry Zucker, our nation’s most accomplished slapstick artists — has a special place in my heart. By the time my family had moved to the U.S., in late 1994, the whole trilogy had dropped into circulation. And for a young man with a bottomless thirst for American pop culture and some shaky language skills, the proudly, aggressively — dare I say, near-insanely — broad comedy contained therein was an ideal entry point. The meaning of basic phrases like “trash bin” and “Go away, your vaguely Eastern European haircut is freaking us out” may still have been eluding me back then. But I didn’t need a goddamn dictionary to know that dudes getting rocked in the nuts was just about the funniest sight this world may ever give us.

3. First scene: Lieutenant Frank Drebin — the criminally hapless yet always ultimately victorious cop played by the late, great Nielsen, who could heal the lame with the majesty of his deadpan — is in a train station, reading a newspaper. Headline: “DYSLEXIA FOR CURE FOUND.” And we’re LOL’ing already!

There’s some kind of bust going down, so of course his trusty confidants, Captain Ed Hocken (George Kennedy) and Nordberg (O.J. Simpson), are undercover on the scene and … OH RIGHT, O.J. SIMPSON IS IN THIS MOVIE.

Hmmm. Weight gain. Not everyone’s go-to reaction when reflecting on Mr. Simpson’s post-1994 trajectory — I mean, just three months after this dropped, O.J. would be riding in a white Bronco during the NBA Finals. But a valid point nonetheless.

5. OK, so the bust is clearly a dream sequence, because now there’s all these armed mafia hit men trying to take out a Clinton look-alike president, then the pope. Now a bunch of disgruntled postal workers — which is just so exquisitely, so immaculately 1994 — bust in, spraying machine guns. And, because of a gag set up earlier, there’s a torrent of babies flying out of strollers and high into the sky, which O.J., mid-gunfight, has to dive around and catch. Truly, this is virtuosic.

6. Oh, drag: an Arab terrorist, with a suicide bomb strapped on, screaming “ay ay ay ay ay ay.” Wow. That’s a lot, right off the bat. This movie came out just more than a year after the 1993 World Trade Center bombing, which killed six people. Presumably, at the time, the reference would have leaned more toward “edgy” than “disrespectful.” Seeing it now — with more than a decade of tragedy, heartbreak, and Islamophobia behind us — you just want to slink away from the screen. Nothing like Naked Gun 33 1/3 to make you ponder the wisdom of U.S. foreign policy shaped as a direct reaction to the events of 9/11!

7. Frank wakes up in bed next to his lady Jane, played by the great Priscilla Presley — truly no slouch herself when it comes to nuanced deadpan. Over the course of the Naked Gun franchise, it was more or less a Jordan/Pippen situation.

8. “I’m all wet,” Frank says, suffering through night-terror sweats. “I’ll get the talcum powder,” Jane says. I … I don’t get it? Which, of course, is a Naked Gun tradition: The joke-per-minute rate is astronomical; they can’t possibly be concerned if you miss a few.

9. Then Frank and Jane mess with the levers on their adjustable bed, which malfunctions, ejecting them out their bedroom window. Now that I get! BOOM, credits, and we’re rolling hot.

10. The title sequence drops over a POV of a police car, with the iconic Naked Gun theme playing, as the cruiser winds through a series of more and more unlikely situations, culminating in a trip through the Death Star and then the age of the dinosaurs.

Ah, pure and honest goofball satire. Go ahead and dismiss the ZAZ house style as obvious doggerel if you must. I find its orderly go-for-brokeness refreshing.

11. OK, so Jane and Frank — newly retired from the force, at his lady’s behest — are seeing a therapist for their marital problems. Turns out Jane wants to procreate, but Frank never quite seems in the mood to do the deed. Maybe something like a black teddy in the bedroom would help, the therapist suggests? “I’ve tried wearing them all,” Frank shoots back perfectly. “They don’t work.” Duly impressed, Marni Googles Leslie Nielsen and finds that his tombstone reads, wonderfully, “Let ’er rip.” R.I.P., Mr. Nielsen. You were truly a treasure. 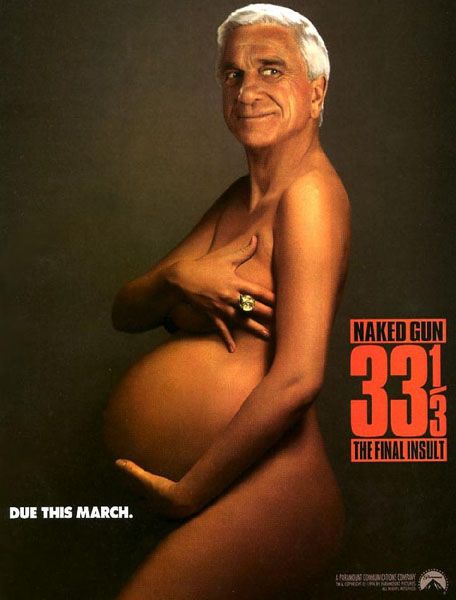 12. Turns out, Frank is just scared of having kids. “It’s a big responsibility,” he intones. “Like being in charge of sanitation at a Haitian jail.” What? WHAT? One of the biggest fears in revisiting old broad comedies you used to love: finding out they were actually wildly racist. Does this count? I truly have no idea.

13. Meanwhile, Frank gets pulled back into cop work: Someone needs to go undercover at the place of business of busty nurse/criminal accomplice Tanya Peters — played by ANNA NICOLE SMITH, JESUS CHRIST, THIS MOVIE.

Anna Nicole’s legacy, I fear, is a fleeting one. But if you were around for the heyday — when she was kind of our catchall ur–busty blonde, graced with manifold trashy charms and just the right dab of self-awareness — I believe you can’t help but feel some type of way. Maybe it was because, way before her untimely 2007 death at the age of 39, she had an air of tragedy to her. Maybe we always felt protective? I don’t know. One thing’s for sure, though: I’ve seen her Die Hard rip-off, Skyscraper, way, way too many times.

14. Frank throws on a sling and complains to the doctor of an old football injury. But, ho ho, unbeknownst to him, it’s a fertility clinic/sperm bank, so cue the misunderstanding: “I can’t seem to straighten it out”; “It has no feeling”; “I may have yanked it too much.” Also: He injured it playing in the backyard with his uncle. Bravo. Bravo.

15. For some reason, now Frank actually has to donate sperm? He shuts the door, we hear some cat-strangling noises, and he comes out two seconds later, his glasses askew and a cigarette in his mouth, with the little container all filled up. And I AM DYING. Marni: “You can’t possibly be actually laughing this much.” YES I CAN LEAVE ME ALONE.

16. Jane, hurt and confused that her man went back to police work despite her protestations, splits town, and a heartbroken Frank throws himself back into the game full-time. First task: infiltrate Statesville prison (“there’s pimps, rapists, and murderers — it’s like being in the stands at a Los Angeles Raiders game”) to find out what criminal mastermind Rocco Dillon is plotting.

17. In a flashback sequence, we find out Frank was betrothed once before. But on the big day, he unwittingly slammed his beloved Gabriella into the ocean — by too violently opening the door of an outhouse precariously perched on a cliff — and she was eaten by sharks. I mean … I … look, I don’t know what to say here. Gabriella got eaten by sharks, OK? She got eaten by sharks.

19. In order to buddy up to Rocco, Frank initiates a prison riot in the cafeteria. “This Chateau LeBlanc ’68 is supposed to be served slightly chilled! This is room temperature!” They break out together and make it to Rocco’s hideout cabin in the woods, where his lady is waiting. And wouldn’t you know it: It’s the alluring Tanya Peters. The camera pans up her long, long legs, pausing at the knees, then continues up those long, long legs, through a second set of knees. Most movies have ladies with one set of knees. This movie has a lady with two sets of knees.

20. Of course, Tanya can’t keep her hands off manly man Frank, who does his best to rebuff her advances. “You’re coming on to me like a kitten with a fresh mouse, but there’s a problem …” “You’re Jewish?”

21. Jane, chasing down Frank, shows up at the hideout and is quickly taken hostage. Then Rocco reveals he’s got big plans: He’s gonna blow up the Oscars, for which an unnamed consortium of terrorists is going to pay him a cool $5 million. Needless to say, this would not have been an approved plot point for a mainstream comedy these days.

22. Papshmir, the leader of the plot, is on a private plane, on the phone, discussing the particulars: “Give my regards to Mrs. Qaddafi. And say thanks for the cookies …” Not that surprising: Really, up until the Arab Spring came to Libya, Qaddafi was pop culture’s go-to “funny” rogue dictator. But, again: Wow, how things done changed.

23. OK, Oscars night! And it’s star-studded: We got Mariel Hemingway, we got Elliott Gould, we got Weird Al Yankovic — who, by the way, I just saw cameo solidly in an episode of Childrens Hospital. Maybe things in 2014 aren’t so different after all.

24. Best Actress nominees include Mary Lou Retton for Fatal Affair, “one woman’s ordeal to overcome the death of her cat, set against the background of the Hindenburg disaster,” and Shannen Doherty for Basic Analysis, “one woman’s triumph over a yeast infection, set against the background of the tragic Buffalo Bill season of 1991.” Don’t even try to front on this. This is good stuff.

27. … and so Frank pretends to be Phil Donahue, and infiltrates the scene.

28. He tackles Raquel Welch to the ground …

29. … but just so that she doesn’t open the wrong envelope and accidentally blow up the Oscars …

30. … then he again rebuffs the advances of Anna Nicole Smith …

31. … before it all ends up with Rocco, holding the bomb-envelope in his hand, and taking Jane hostage.

32. It looks like it’s game over. Then Frank asks one deviously brilliant question: “Can I pull the underwear out of my crack?” Rocco reluctantly agrees, and Frank pulls a fake-wedgie-pull into a slap-the-envelope move. And by the end of everything, Rocco and the bomb go flying into the stratosphere, where they explode Papshimr’s plane. Classic police procedure. Just goddamn textbook. Oh, also, Jane and Frank end up having a baby.

33 1/3. But not before my favorite part, fondly remembered from growing up: the scene where Frank-as-Donahue hops into the big dance number and manifests chaos everywhere. The payoff comes when he’s supposed to slide through the other dancers’ legs — and manages to bonk every last one in the groin with his forehead. Because we’re talking triumph. We’re talking the American way. And so of course, we’re talking dudes getting rocked in the nuts.

Cloud Nothings and the Deathless Song of the Summer Debate