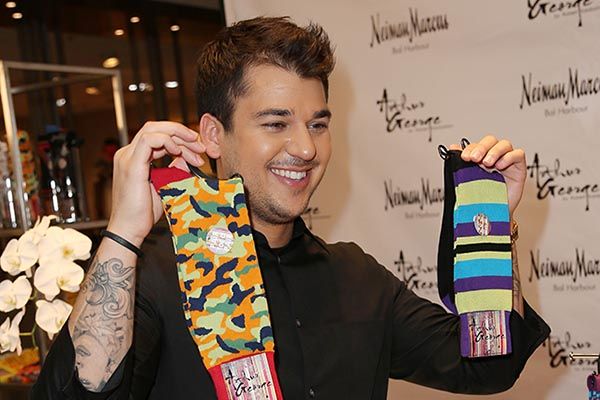 Like, 3.8 seconds of cold open go by, and then Khloé is saying to Scott and Kourtney, “You guys don’t bone often,” because Khloé is the best. Scott explains that Kourtney never initiates the sex and approaches the whole process with a We gotta get this over with demeanor; Scott also uses the phrase “the old sackaroonie,” which goes a long way toward explaining why Kourtney’s not initiating. Everybody’s a different weird shade of orange.

Exposition: Kim explains that her younger brother Rob — last seen on this show complaining that his sisters were insufficiently supportive of Arthur George, his foray into the men’s hosiery business — just got out of a “very weird relationship” with a pop star who forced him to keep their thing a secret. It’s Rita Ora, although the fake newspaper front page that flashes on-screen doesn’t show her face, and nobody says her name. It’s Rita Ora, though! So we know it’s sometime in early December, because Rob is midway through the Twitter bender in which he accused Ora of cheating on him with “nearly 20 dudes” (and then, later in the timeline, “more than 20 dudes”) and his sisters are trying to convince him to cool it. Kim tells him to go running, because “the best revenge is a good body.” Make a note of that; it’s foreshadowing.

Kim goes to Jonathan Cheban’s house, but Cheban’s too busy to talk to her. Just kidding — he’s got nothing better to do than watch Kim talk on the phone with Rob. She tries again to talk him off the ledge. Kim talks about Rob starting a “media frenzy” with his Rita Ora tweets, and in every dictionary in the world the word “frenzy,” robbed of all meaning, begins to fade away like Marty McFly in that family photo from Back to the Future. Kim drinks something that looks like a beet/apple/carrot/lemon/ginger BluePrint juice. She’s really pounding it.

Kourtney and Kim take Mason and Kim’s goddaughter Sophia to the Miami Children’s Museum. There’s this interactive exhibit there where Mason can pretend to be grocery shopping, which is awesome because as a Kardashian, it’s something he’ll never do.

We find out that Rob has been trying to convince Kim to convince Kanye to produce a song for some girl who’s been letting Rob do sad-rebound-guy sex stuff to her; when Kim tells him she doesn’t have any say over who Kanye works with, Rob sends her a bunch of shitty texts. Kim says she’s “literally shaking,” calls her mom, quotes Rob: “The fact that Kanye won’t do this is absolutely ridiculous…I’m going to publicly bash Kanye…I hope your sex tape haunts you for the rest of your life.” Kris Jenner advises her to “take it to a soft place” because Rob is really upset and not thinking clearly.

Time for a made-up storyline: Scott meets Kourtney and Khloé at Dash and tries to convince Kourtney to go in the back room and make out with him. She refuses; Scott decides he needs T-shirts, so he and Khloé go shopping at Adriano Goldschmeid, where Scott accidentally grazes Khloé’s breast while reaching for something on a rack and tells her she’s been a lot more fun than Kourtney lately. “I feel like you and Lamar would still get crazy, go in a dressing room and get your bang on,” Scott says to Khloé. Fun fact: There are paparazzi photos of Khloé (in a Jay Godfrey Decker hi/lo dress with flocked elastic waistband) and Scott shopping at Adriano Goldschmied on October 15, 2012, more than two weeks prior to Rob’s Twitter freakout. Either the Kardashians have become unstuck in time, or TV is a goddamn liar.

Hey, it’s rapper/producer/mercurial creative visionary Kanye West! He’s at dinner with Kim, Kourtney, and Mason. Kourtney says she’s allergic to shrimp and Kanye says he is, too, and then he says some stuff to Mason that’s unintelligible because he’s not miked and is talking to a toddler in toddler-voice. Rob calls Kim to apologize for being such a dickwad, and Kim accepts, but let’s jump ahead because something important is about to happen: ROB IS COMING TO MIAMI TO LAUNCH HIS SOCK LINE AT NEIMAN MARCUS.

Scott and Khloé go out on race-car driver Chapman Ducote’s boat with Chapman and his wife, M.K.; Chapman’s boat really is pretty amazing. I don’t have a joke about it; I’m pretty sure this scene was included solely so I could feel bad about my boatless life. Khloé takes a picture of Scott and Chapman where they look like twins and posts it to Instagram. Then they sit around reading the comments out loud, even though they’re out on the water on a beautiful boat.

Later we see Khloé and Scott having a conversation back at the Eden Roc. “You know I haven’t seen her vagina since we had the second kid?” Scott says, referring to Kourtney. Khloé says her back hurts. Scott offers to give it “a good crackin’,” and then starts chasing her around the house. Almost positive based on Khloé’s denim shirt/sundress outfit and her wet hair that this footage is from the last time Khloé was in town — specifically, from sometime after the opening scene of the second episode of this season, where Khloé and Mason get caught in the rain. Not that I’m watching this show too closely or anything.

Rob has arrived in Miami, having eaten all the feelings in Los Angeles. He’s depressedly poking at an iPad in his hotel room. Kim tells us that Rob is generous to a fault when he’s in relationships, often beyond his means. Anyway: To the club! Womp womp womp dubstep music that sounds like somebody imitating womp womp womp dubstep music plays as girls cursed with cripplingly high levels of self-esteem throw themselves at Rob and pretend to care about his sock line. Has there ever been a sock line with more buzz? Judging solely by this show, Rob’s about to have the sock game sewn up like a young Seymour Goldtoe in his prime. A girl announces, “You’re getting a double motorboat,” and then Rob gets a double motorboat. Life is a gift, womp womp womp.

Kim, Jonathan Cheban, and Larsa Pippen have a special post-club meeting of the Terrible People Illuminati, where they discuss Rob’s sex life. “He likes video hos, there’s nothing we can do about it,” Cheban says. “Normal girls take advantage of him, so he goes to those kind of club girls, so he can be in charge.” Kim says, “Back in the day, he used to send me e-mails saying Please save me from models and video girls.” This seems like a good time to mention that we don’t have proof-of-life on Mercy yet in this episode.

Kourtney and Kim go to check out a dead-tech postmodern house on Sunset Island. There appears to be a photograph of photo-shoot lighting equipment on one wall. It looks like a rap-video mansion; Kourtney finds it insufficiently kid-friendly and is insufficiently person-friendly to Jill, the Realtor, who is one-half of a Miami lady-Realtor duo called The Jills. Later, another Jill shows them another, kid-friendlier house and there’s a dustup over who’ll get the master bedroom and who’ll have to stay in the two-bedroom guest house, like an animal or a teacher. Kim actually tears up at one point. Other Jill just watches, her face an implacable mask, although maybe it’s always like that.

And maybe none of this is real: Radar Online reported in October that the Ks attempted to rent houses in Sunset Island and other parts of South Beach, but couldn’t find a neighborhood whose residents were into the idea of having a three-month paparazzi shit-circus erupt on their block. They were eventually forced to rent a place in a gated community nearly 14 miles from South Beach, in what Radar calls “gloomy North Miami Beach.” (“It’s a far cry from their usual posh digs,” says an anonymous source who, despite being a totally real person, speaks entirely in gossip-magazine clichés like “posh digs,” “with just a 7-eleven and an abandoned old bank close by.” Spooky!)

Khloé calls Kim to report that Scott’s been overly sexual with her and says that if Lamar gets wind of this he’ll kill Scott. Nobody uses the word “sublimated” because nobody knows what the word “sublimated” means. Kourtney ends a conversation by saying “Toodly-toods.” Rob, Kim, and Kourtney go to lunch. Rob is dressed in all black. He looks like Vigilante Carlstroem.

Kim tells him that you have to love yourself; Rob says that instead of focusing on somebody else he’s going to focus on himself from here on out. Everybody goes to the club again, to blow off whatever steam has accumulated since the last time they went to the club. “I have a booty but I don’t know how to pop,” Kim tells some club-owner dude, and asks if some of the dancers can come over and give her a booty-popping lesson. This happens.

Scott’s drunk and handsy. He keeps touching Kourtney’s hair. He grabs her elbow. Kourtney’s grossed-outness looks authentic; I’m guessing this stuff actually spontaneously occurred and they built an episode around it. That night at dinner, Khloé reveals to Kourtney that Scott says more inappropriate things than appropriate things; Kourtney seems not just unconcerned but bored. “I def forgive you,” Khloé says to Scott, abbreviating “definitely” because the word “definitely” just wasn’t fun enough. They’re interrupted by a giant plate of sushi. “We have a really large douche-y dish coming in,” says a smiling blonde waitress whose big break this is.

All manner of TV magic is employed to make it look like Rob’s in-store appearance promoting his sock line is the biggest thing to hit the Lincoln Road Mall since Lids — dubbed-in screaming females, a quick and inconclusive shot of a line of indeterminate length. Rob lumbers in just like the pill-miasmaed ’70s Elvis in That’s the Way It Is and says “The amount of people here is just crazy to me.” The fact that Kim and Kourtney are also there has nothing to do with it. Having successfully posed in a store next to his famous sisters and a rack of seizure-inducingly-patterned $30 socks, Rob says he has to leave Miami to get to work on his “next venture in the business world,” except he doesn’t say he has to leave, he says “I gots to go,” so I hope his next business venture is a fleet of zeppelins and all of them crash with him onboard.

Scott takes Kourtney to see one more house, which turns out to be the place Kim and Kourtney had the master-bedroom fight about earlier, and — surprise — Kim’s leased it for them to live in, and she’ll even let Kourtney have the master bedroom, and all is def forgiven. Nobody tell her about the abandoned old bank.

Life Is But a Dream: What to Make of Beyonce's Most Elaborate Social Media Update Yet?