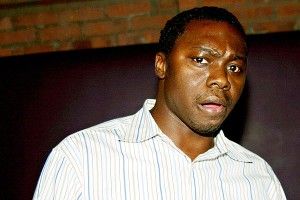 Almost exactly one year ago, Dexter Isaac, an inmate serving a life sentence on a murder-for-hire conviction, went public with his involvement in the 1994 robbing and shooting of Tupac Shakur at Quad Studios in Manhattan. This was the incident that sparked the East Coast/West Coast hip-hop feud: Tupac was at Quad that night to meet Biggie Smalls and Sean “Diddy” (then Puff Daddy) Combs, and believed they were behind the assault. Within three years, both he and Biggie would be dead. And according to Isaac, who says he pulled the trigger that night at the recording studios, the whole thing was called in by James Rosemond, a.k.a. Jimmy Henchman, a rap music manager/hanger-on with a long list of criminal allegations to his name. Now Henchman’s got one more notch on his rap sheet, and this one’s a bit more concrete. The New York Times reports that on Tuesday a federal jury in Brooklyn convicted Jim of running a multi-million-dollar drug trafficking operation. Says U.S. attorney Loretta E. Lynch, who is apparently as awesome at convicting criminals as she is with providing punchy wrap-up quotes about said convictions: “Rosemond built and ran this drug trafficking organization in order to personally enrich himself and his associates. And profit he did. [Insert whatever dramatic pause noise you’d like.] The paydays are over for Jimmy Henchman.”

Careful readers will note, of course, that Henchman’s conviction had nothing to do with his alleged role in the Tupac shooting. While the NYPD did begin looking into Isaac’s accusations, the statute of limitations on the incident had already run out. Meanwhile, The Smoking Gun reported that Isaac had already told his story to the feds before going public, and that his attacks on Henchman may have been simply personally motivated, and therefore less trustworthy: “Isaac has … made his distaste for Rosemond abundantly clear. In explaining his decision to cooperate with the government, Isaac explained, ‘I’m not gonna spend the rest of my life in prison,’ according to one TSG source. Isaac’s enmity toward Rosemond … apparently stems from his belief that the music manager has not sufficiently aided him or his family while he has been incarcerated.”

Further muddying the waters was the reveal of Henchman’s alleged involvement in another, less high-profile hip-hop murder, that of 50 Cent associate Lowell Fletcher. According to reports, the homicide was a retaliation for an incident in which Fletcher messed with Rosemond’s teenage son for wearing a T-shirt bearing the logo of Rosemond’s company, Czar Entertainment. (Czar Entertainment represents G-Unit cast-out The Game, of whom Fletcher and the rest of 50’s G-Unit were not fans at the time.) And then came Henchman’s arrest for drug trafficking, in which the cops dramatically ran the then-fugitive down on the streets near New York City’s Union Square. All of this happened within a month of Isaac’s confession.

When Isaac first went public, the hope was that the new information would stir the pot, and that the interminable process of making an arrest in the Tupac case (and by its default close association, the Biggie case) would pick up steam. As of now, with Rosemond heading to prison on wholly unrelated charges, that does not appear to be happening. (But what colorful charges! Says the Times, “[The cocaine] was often covered in mustard to prevent detection, and both money and drugs crisscrossed the country in musical-equipment boxes.”) The arrest may still provide some sense of comfort for hip-hop fans who choose to take Dexter Isaac at his word. For the most part, though, as far as concrete legal movement in the deaths of Tupac and Biggie is concerned, we’re just going to have to keep on waiting.

Filed Under: Crimes and Misdemeanors, Tupac