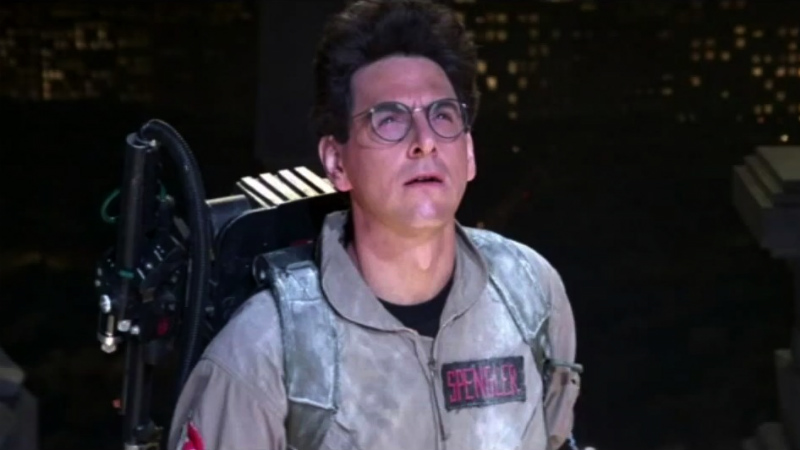 For two months late last year, I shared a house with a pair of married friends and their two young sons. The boys were permitted a show before bed and the occasional movie, and often the movie was Ghostbusters. For a couple of weeks, it was always Ghostbusters. So much so that costumes and home-movie reenactments followed. One boy was a buster, the other was a ghost.

My friends have a wall projector, and there’s a way children watch a big screen sometimes that leaves me weak with envy. You can watch a child watch something and feel that everything you’ve ever watched has been watched wrong and that you need to watch movies within a force field of high, impenetrable concentration. One Saturday, I awoke to the start of another Ghostbusters screening. I had watched almost a quarter of the movie before I realized I was standing at a sink.

It had been awhile, but I remembered how weird I found that movie in 1984 — the sex, the demons, the sex with demons. “Subversive” was a word that wouldn’t have come to my 8-year-old self. At the sink that morning, however, “subversive” was the takeaway. For one thing, the Ghostbusters do a lot of smoking. For another, I couldn’t actually tell in any way that it was a movie for children. The prevailing sense of childishness is the sort that you get when grown men don’t want to be grown: The movie is about scientists who start a metaphysical pest-control company.

The director was Ivan Reitman. He gave the movie’s lightness a scary tinge. Fridges and parks and libraries were crawling with paranormal activity. But one of the main selling points is the screenplay, which isn’t great but lays the groundwork for a lot of smart screwball stuff between Bill Murray and Sigourney Weaver. What makes Ghostbusters addictive to a child and captivating to an adult are probably very different things. But what both responses have in common is Harold Ramis, who wrote the movie with Dan Aykroyd and played the nerdiest Ghostbuster, Dr. Egon Spengler.

Ramis died Monday of an autoimmune disorder. He wrote and directed a handful of other hit comedies — some of the comedies of their day: National Lampoon’s Animal House (1978, directed by John Landis), Meatballs (1979, Reitman), Caddyshack (1980), Stripes (1981, Reitman), two Ghostbusters (1984, 1989, Reitman), Groundhog Day (1993), and Analyze This (1999). At least one of these occupies a lot of room in the comedy bible of many a moviegoer, and they are mostly movies about men who believe they’re better off as boys — and not only because nearly all of them glorified the dour exuberance of Bill Murray. Although there is that: Ramis helped enable Murray’s air of the unrehearsed.

The movies are quotable and formative and surreptitiously deep. On long car rides and dates, I’ve listened to explanations of why Caddyshack is simply the greatest movie ever made or why Groundhog Day might be the second greatest. Some people believe it’s the other way around. There are philosophers who appreciate Groundhog Day as an inspirational practical application of Nietzsche, and they’re not wrong. Caddyshack is unruly and virtually plotless. It manages to disdain the elite while blending a heretofore impossible reverence for anarchy and the spirituality of golf.

Most of Ramis’s movies exhibited a playful distrust of institutions and rites: the military, the country club, New York City, February 2, the passage into adulthood. He worked as a substitute teacher and freelance reporter in his native Chicago, and as an actor he seemed recessive, observant, and surprised to be there. He was content to let Murray or John Candy crack everybody up. The cutaways to his jovial expressions in, say, Stripes implied he knew who the stars were.

He was the rational intellectual — even in Army fatigues, you just knew he had on a lab coat underneath — and that never made anybody famous. But he channeled that intelligence into hilarious, endlessly watchable comedy. You, in turn, developed a long, deep association with Ramis’s sideways, antiestablishment humor. Whether you knew it or not, he was your pal, the one who directed and cowrote movies you found yourself obsessed with, maybe because they were the movies you would’ve have made if your brain worked the ways his did. And that was the appeal of Ramis’s movies, that they flatter you without pandering: It’s smart guys versus fools, snobs, drones, and idiots. Whether you’re 5 or 45, if one of his movies comes on, you just stand before it transfixed: This is really good — it’s speaking to me. That was the democratic brilliance of Harold Ramis: He made adults feel young and kids feel wise.

Predicting the Oscars, Part 3: The Ones We Watched So You Didn't Have To (and 'Frozen')