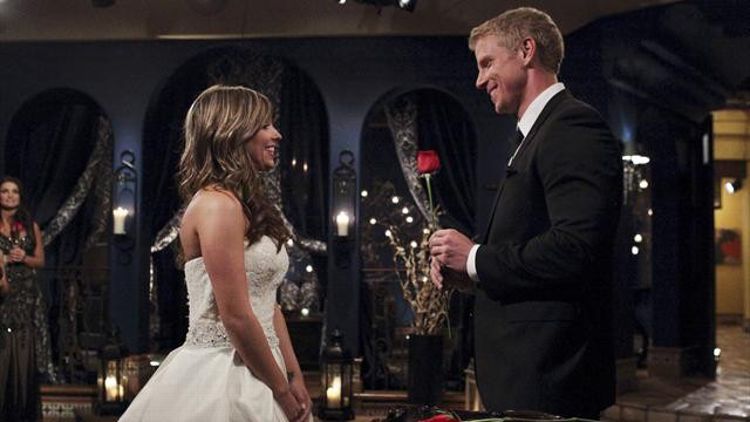 So much has happened in the 10 interminable months since our last online offering from the Bachelor School curriculum: We’ve opened satellite campuses in Studio City, in a defunct Yogurt Odyssey stall in the Arizona State University student union food court, and next door to a modeling agency in Manhattan’s meatpacking district that charges aspiring beautiful people $500 per “portfolio submission” (i.e., e-mails to ads in the back of the Village Voice seeking “open-minded masseuses”), to maximize our reach into the places where hopeful contestants obviously need our educational services the most. We’ve explored a promising international partnership with the reputable bride-importation concern AnastasiaDate.com. And, in an effort essential to the ongoing success of both our flourishing academic institution and the Bachelor franchise itself, we’ve had our best minds deconstructing the tragic and completely unexpected dissolution of Ben Flajnik’s ForeverUnion with Courtney “The Model” Robertson, the greatest competitor in the history of televised dating shows. It is only through noble failures like these that we can improve the quality of our product, and, ultimately, the human species itself.

Which brings us to last night’s premiere of Season 48 of The Bachelor. A new series brings new opportunities for learning, and so we huddled before the most advanced video-playback equipment available (made possible by a very generous grant from the Foundation For the Preservation of Television-Generated Romance), iPads open to our proprietary RoseLog™ apps, ready to record our findings on the two-hour kickoff event. Always eager to consume every part of the dating-show buffalo, conservation-minded ABC has offered this year’s Bachelor slot to Sean Lowe, brokenhearted also-ran from single mom Emily Maynard’s reign of fickle terror on The Bachelorette, in hopes of repairing the emotional damage the notorious soul-pulverizer inflicted upon the unassuming insurance agent from Dallas. We’ve watched the footage, crunched the numbers, and run the simulations; here is the most up-to-date wisdom gleaned from the preliminary attempts of 26 (!) women to collect enough life-sustaining roses to earn a chance at happiness.

As far as your Bachelor — and the network viewship at large — is concerned, you are an unknown quantity, a tabula rasa, a wide-eyed ingénue stepping out of the limo from Nowhere, USA, as it pulls up to the mansion in Soon-to-Be Fairy Tale Life, CA. You have no past, only dazzling future. Pick a new name for yourself — “Tierra” sounds lovely, exotic; “Keriann” unique yet familiar; “Desiree” subconsciously evocative of intense passion, the mysterious salon-name of your favorite nail technician. If you’re unwilling to surrender a common birth name in an effort to stand out, you’d better mix it up on the spelling, lest you become lost in a super-boring sea of utterly indistinguishable Ashleys and Lesleys. (Well played, AshLee, though you missed an obvious branding opportunity to add an emoticon to your name. :-( )

From there, it’s time to select an occupation. Contestants are discouraged from listing “aspiring actress” in their bios; seeing that in 26 chyrons would be both confusing and profoundly disillusioning for the viewer. Go big here: No job is too ambitious, too unbelievable. Sure, you’re a JumboTron operator, why not? OK, “personal organizer,” that’s a totally valid thing for which you are paid money; we don’t need to see the invoices for “inter-rack shoe redistribution services” and “walk-in closet imagineering.” It’s astounding to us that no one’s picked “Lithuanian royalty”; producers have neither the time nor the desire to background-check aristocratic bloodlines. Sure, you could run into some logistical problems should you advance to the Hometown Visit round, but you need to get there before it’s time to Airbnb a castle. Cross that particular drawbridge when you come to it; in any case, a lie uncovered makes for good television, and if you have to leave in disgrace, go out using that rented tiara to defiantly smash the confessional camera in the back of the limo. You’ll be remembered, and an invite to Bachelor Pad will be awaiting you at your studio apartment in Marina Del Rey. The point is this: You are who you say you are, until they figure out otherwise. Don’t settle for “hairstylist” or “cosmetics consultant.” You’re smarter than that. Write your life large across the JumboTron of our imaginations.

Here we go again. After Courtney’s never-in-question, paradigm-shifting victory last year, everyone wants to be a model, thinking the most recent path to victory is the surest one. It’s unclear how the more-grounded Sean, seemingly lacking Ben’s voracious appetite for mannequin-fuckery, will respond to this particular temptation; while his quiet side-career as a glistening Soloflex spokesman (prove to us he isn’t in every late-night fitness infomercial; you can’t) might indicate a desire to pair with the professionally perfect, maintaining his wholesome, down-to-earth image might dictate that he limit his model-exposure. So if you’re going to be a model, be more model. Value-add.

Be a FORD MODEL. Sean can’t risk overstocking his harem with inferior modeling talent. He’s got to make it count. Coming at him with some undifferentiated “fashion model” nonsense (as opposed to what? “major appliance model”?) is not going to get it done. Courtney may have been, on her best days, the go-to discount-bikini exhibitor in T.J. Maxx’s Sunday flyers, but she changed the game. You need a brand-name modeling agency behind you now.

It’s unclear whether or not Sean’s obvious early preference was just coincidence or if it’s a deeply ingrained fetish for chestnut tresses, but he couldn’t raid Chris Harrison’s flower stash fast enough to distribute “first-impression” roses to virtually any brunette within stem’s reach. Quick-thinking contestants should have been tearing apart suitcases in search of emergency wigs, raiding the bathroom cabinets for cosmetic hair-darkening agents, or wrecking the pantry for abandoned bottles of food coloring to increase their chances of catching Ben’s eye. By next week, we wouldn’t be surprised to find any remaining blondes huddled in a dark bedroom, passing a contraband can of Krylon Hammered Brown Outdoor Spaces secreted to them by a sympathetic groundskeeper, hearing in its gentle aerosol hiss the promise of temporary salvation.

When the limo pulls up to the mansion, you have approximately 10 seconds to imprint an image upon an overwhelmed Bachelor’s harried brain. These are the notable first-impression strategies employed by last night’s contestants:

Seriously, though: Are you insane? In your mind, you’re being “fun,” or a “prankster,” or “showing your lighthearted side.” In the Bachelor’s mind, you represent “I am about to be disemboweled in front of this camera crew, and I am powerless to stop it.” Haha, great joke, let’s get married right here at the curb, just like we both always dreamed of; detonate the mansion. Remember, just last season, when Blakeley hastened her departure by presenting Ben with a “romantic scrapbook” of their minutes-long relationship? This unexpected bridal processional was like making a romantic scrapbook, but from locks of hair and skin-tags snipped off during a chloroform-assisted “nap.” Perhaps we overstate our case. But perhaps not. A quick reminder: The Bachelor’s not here to actually get married. He’s here to find someone to date for four to six months, after sleeping with as many women as he can under the impenetrable shroud of consequence-free secrecy afforded by prime-time cryptopimp Chris Harrison. So maybe rethink the dress. Just a suggestion.

You might now point out that Lindsay survived the first night. Don’t ignore sound process because of unlikely results. Hail Marys are sometimes caught.

6. Maybe Let’s Not Go Too Crazy With the 50 Shades of Grey Stuff, Because While It Was Kind of Funny/Terrifying When You Pulled That Tie Out of Your Cleavage, There’s Really No Discreet Place Where You Can Handcuff the Bachelor and Beat His Genitals With a Rubber Feather-Duster Without Detection, and Also, You Are Very, Very, Very Drunk, and What’s That Dance You’re Doing, Maybe This Isn’t Going to Work Out

The producers have decided to change the “rules”? Sean’s handing out a bushel of roses before the rose ceremony? They’ve brought back a very popular contestant from a previous season? Wait, two previous seasons? And one of them is a “fan” from BP3, which is just incrementally better than “sweepstakes-winning stalker”? Take a deep breath, put down the cheese knife with which you’re about to hack off your hair in disbelieving rage (and also because it’ll be easier to dye brunette if there’s less of it), and recall this simple fact.

There is only one rule on The Bachelor:

Oh, the putting-out places you will go! There will be helicopters, and mountaintops, and ski chalets, and luxuriously decorated yurts on the Serengeti that will let in the sounds of a thousand hyenas braying along with your lovemaking, and perhaps even a zero-gravity tryst on the international space station, where a cosmonaut named Yuri may awkwardly drift by, his enthusiastic thumbs-up serving as both an affirmation of your deepening relationship with your Bachelor and an invitation to join in on the carnal fun.

You will put out.

But not yet. There will be time.

The Saddest Thing That Happened on The Real Housewives of Beverly Hills Last Night: Give Me a Ring Sometime