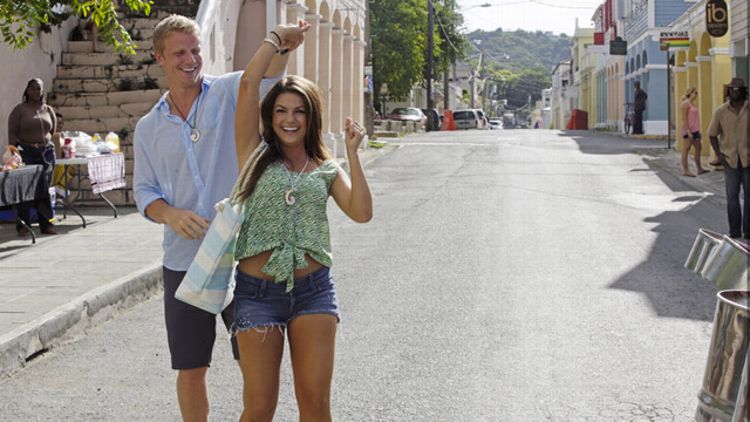 When there’s a feeling of inevitability to a long-expected result, there’s a tendency to simply accept it and move forward, and pass up a moment of reflection that could yield valuable insights into the human condition. “Why bother thinking about what just happened?” you probably ask yourself, “if I’ve known the likely outcome for weeks?”

We have gathered here to make you the best dating-show contestant you can possibly be. To turn the avoidable failures of those who have come before you, without the benefit of advanced Internet-based learning systems, into your rousing successes. To win you that ForeverLove, and to deny that ForeverLove to your inferior, ill-prepared competitors.

On to the lessons.

If you’ve survived this deep into your season, it’s time to consider a more aggressive plan of action; you may have already spent six or seven TV-weeks lying in wait, sizing up the competition, and looking for your moment to make a move. That moment is now. A Hometown Visit is within your grasp, and it would be the very definition of insanity not to crush the vulnerable while the crushing is good. No, you don’t want to be the reflexively reviled “drama person,” and no, you’ve never seen yourself as the type who just “plays the game,” because this is not about game-playing, it’s about love-finding. Or so you try to tell the reflection staring back at you from the bottom of your 400th glass of pinot, before a producer scrambles to get you a refill and interrupt any misguided, fledgling attempt at starting a fearless moral inventory.

A quick thought experiment: If the Bachelor asks you, “I keep hearing about how this poor doe is wandering around the house with a broken leg. But every time I see it, it never limps. I’d hate for that beautiful, delicate creature to suffer. Have you ever seen it limp? No one will give me a straight answer,” how do you respond?

1. “I haven’t noticed. I’m just really focused on us right now.”
2. “Oh, yeah, the other girls are always talking about that limping doe, but it’s really not that bad. It’s fine.”
3. “I’m SO glad you brought that up. I sat down with the doe and had a good look at the leg, and it’s definitely broken in three places. It does nothing but cry out in pain all night, the poor thing. It’s heartbreaking. You need to end its suffering right away. Hang on, I’ll go get you a hammer.”

If you weren’t already looking for a hammer on your own before you even reached the third option, your journey may end right here. Never pass up a golden hammertunity in Week 7. You won’t get another one.

Time is running out. Have we mentioned that? Is the incessant ticking of that stopwatch as it counts off each precious second not a sufficient warning? Look around: By the end of this week’s dates, there will be but four bachelorettes left. There were over 9,000 when we started. The numbers game is not in your favor. Put down the hammer, grab your purse, and turn it inside out. Sort through the tattered family photographs, the half-empty pill bottles, the old engagement rings. “This is me,” you must tell him, right now. “I just need you to know all of this before we move forward together.”

And here’s what will happen: He will pull you closer, kiss the top of your head, tell you he doesn’t care that your distant father is battling mental illness, that you were briefly married for a year in high school, that you have a weird tattoo on the top of your foot, what is that, a dragon wrapped around a dolphin? He accepts you for who you are, and thanks you for sharing every part of you.

He will be lying, because he’ll be weighing every revelation when he finally chooses a temporary fiancée, but at least you’ll have a chance at becoming a variable in his emotional calculus. Don’t let whatever secret you’ve been strategically withholding for The Right Moment become something the producers turn into a bombshell tease. Be a “broken person”; he’s broken, too, because he’s allowing a television network to assemble a harem that he will hold hostage in a luxurious castle until Chris Harrison takes away all of his magical roses. It’s time to be broken together. At least until he walks you to the curb to tell you about how special you are in private, right before closing the limo door and sending you back to your old life, your secrets exposed to all of America.

There are two poles to your relationship with your Bachelor: Closeness and Distance. It’s an incredibly simple concept that not enough contestants grasp: Whenever he feels that you’re holding back, you move further away; when you open up, you move closer. And nothing will bring you closer than confessing your love. You don’t even necessarily have to say the words “I love you,” though that’s the most direct and powerful formula for Closeness. “I am falling in love with you,” an emotional rain-check, will be sufficient in most cases; maybe you’re not quite there yet, but you can see there from here, and it looks like a place you’re almost ready to visit.

So tell him. That’s why he’s brought you to this place with all the shade trees and the fruit-picking and the verdant fuckload of oppressive pastoral serenity. Cut it out with the no eye contact and the avoidant chitchat. If you’re moving in the wrong direction this late in the game, the next chance you’ll get to open up is in the After the Final Rose studio, in front of a howling crowd of tourists. You’ll never be more distant than that.

4. Learn to control your face.

Your face is among the most expressive body parts above the neck and below the hairline, so it’s crucial to control it. It can wordlessly convey an almost infinite number of emotions; it’s the place where your eyes, nose, and mouth live; and it’s the gateway through which most life-sustaining nutrients enter your digestive system. It’s super-important; without a face, not only would your communicative abilities be severely compromised, but your Bachelor would run screaming from the room upon your arrival at your one-on-one date, certain that the soul-chillingly smooth-countenanced creature that haunted his unhappy childhood finally escaped his nightmares to try to murder him in the daylight. This would ruin your date.

If you find that you have no control over your face, practice in a mirror until you’re comfortable manipulating it in the fashion of most “normal-seeming” humans. Not having indulged in Botox is no excuse for a lack of facial control; however, should the mastery of basic gestures like “raising an eyebrow” or “squinting in apparent disgust” continue to elude you, the injection of paralytic toxins into twitchy, renegade areas is a viable, if temporary, solution.

5. Do not let anyone take your sparkle away.

You are a beautiful diamond, your princess-cut facets reflecting blinding love back into the ever-darkening world that always seeks to tarnish you. Defend your sparkle all costs. When the wicked approach, summon forth the eternal guardian of your sparkle, who will cleave your enemies in twain with a sword made of righteous fire and toss their lifeless bodies into Vulcan’s furnace. Your sparkle will survive, as incomparably brilliant as before, and all who gaze upon you will know what goodness is.

You’re safe on your cot. Always. Get under the blanket if you need to.

OK, they took your sparkle. They were too much for your sparkle-guardian, who showed up drunk and couldn’t get his sword to ignite. The world is a wicked place, full of people who’ll never understand you. Don’t give them the satisfaction of watching you suffer before the Limousine of Despair’s Backseat Panopticon of Misery; if you can hold it together for just a few minutes, the waves of sadness will pass. You never really liked that Bachelor anyway. He was way too Soloflexy, if we’re being totally honest here.

You are one of four contestants with a piece of his heart. It’s time to take him home to meet your parents.