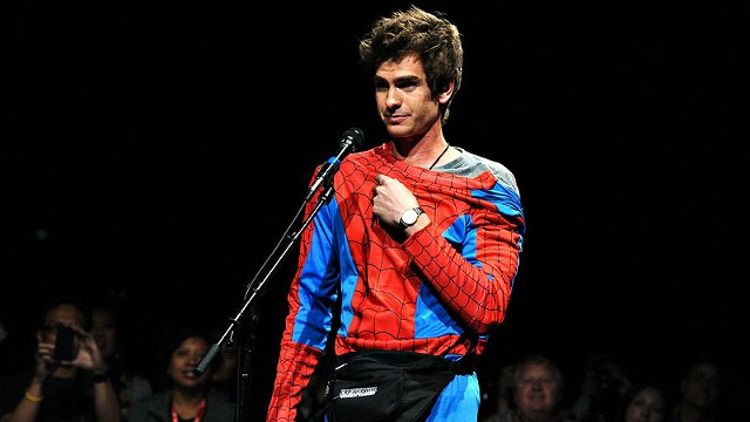 Last night the team behind The Amazing Spider-Man, the latest big-screen reincarnation for Peter Parker, spread out and hit the town in four international locations to release and gas up footage from the new flick. Director Marc Webb was in Los Angeles; Emma Stone, who plays pre-M.J. love interest Gwen Stacy, was in Rio de Janeiro; Rhys Ifans, who plays the villain, a lizard-man type of thing that sort of resembles a mini-Cloverfield monster, was in London; and Andrew Garfield, Spidey himself, was in New York. The idea was to argue that this new version is really, truly, remarkably, no-come-on-for-real different than Sam Raimi-Tobey Maguire’s trilogy, which only ended five years ago. Said Webb: “I think there are a lot of things from the Spider-Man canon that haven’t yet been explored cinematically. This movie really starts off with Peter Parker and his parents, which is something we’ve never really seen before, and I think that was something we were all really interested in exploring as filmmakers.”

But if the new trailer is any indication, Webb and his crew will have to fight to distinguish themselves for just a little bit longer. The actual movie may well be wildly different, but the new clip seen here has that same mixture of one-liners (“You seriously think I’m a cop? In a skintight red-and-blue suit?”) and dark foreboding that its predecessor managed to knock out. Once the movie is released it may be evident how different it is; more likely, Webb will have a pretty hard time convincing a whole lot of people that it was actually necessary to “reboot” the franchise. But who cares? If you like Spider-Man, here’s a new one, and it stars Andrew Garfield being all pissed off, shoving bullies into lockers and beating up cops and drop-kicking lizard-men in the chest, and generally looking like a pretty convincing tortured ass-kicker. Also, at one point Garfield is hanging out shirtless with Stone, so maybe Peter Parker gets laid more this time?