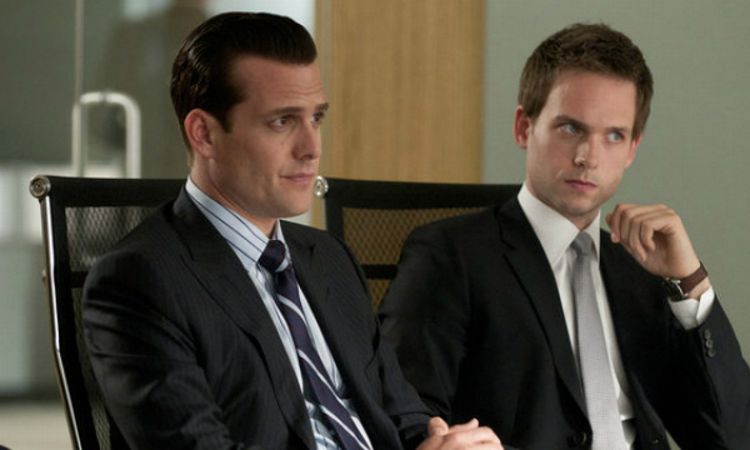 Now that the “good part” of the television season is over (Mad Men and Game of Thrones), and you have a few weeks before Breaking Bad returns, and even The Bachelorette only has a handful of episodes left, you must be looking for television shows to fill your time. While some people don’t think highly of most of summer’s offerings, they are patently wrong. In fact, basic cable offers an embarrassment of riches. Tomorrow night, Suits comes back on USA for its second season, and since you have nothing else to do, you should watch it.

This is the show for you if you like: Mad Men. OK, I know you’re laughing, but consider this: Suits is about Mike Ross, a twentysomething who lost his parents at a young age. He works at a fancy New York law firm (offices may as well be on Madison Avenue) where everyone wears very sharp suits, but he’s harboring a huge secret. Mike Ross did not go to Harvard Law School! He did not go to any law school! He is just a genius who takes the LSATs for other people and Lexie Greys–it-up with his incredible memory. He has his very own Bert Cooper in his mentor Harvey Specter. Harvey knows about Mike’s Harvard-less past but doesn’t care. In fact, he likes Mike because of it. So this is all sort of similar to Don’s Dick Whitman secret, right? Or maybe it’s similar to Don knowing about Peggy’s pregnancy but ignoring it and taking her under his wing nonetheless. However you want to see it, the Mike/Harvey relationship is central to Suits.

The person you are most likely to recognize from a previous show or movie: Gabriel Macht. When you compulsively and indiscriminately watch a lot of television, you get to know a few solid actors who make the rounds before landing a plum part on network TV. But sometimes it goes the other way: An actor bounces around for awhile until they settle into a signature cable TV part, à la Kyra Sedgwick on The Closer or Matt Bomer on White Collar. (White Collar returns in July. Are you as excited as I am?) The equivalent here is Macht. His biggest movie role was probably playing the lead in The Spirit in 2008, but he never quite caught on in Hollywood. It’s unclear whether Macht has any idea what a real, live lawyer’s temperament might be like, or if he has ever even seen a convincing lawyer portrayal on television or in a movie. But he wears enough spread collars with Windsor-knotted-ties that it doesn’t matter. Plus, he always wins. Who doesn’t love a winner?

The basic plot you need to know: Last season, Mike began dating his ne’er-do-well best friend’s ex-girlfriend after he forced said best friend to leave town because he was causing too much trouble. (The precise trouble is not important.) Well, the best friend is back, and he is not happy that Mike has swooped in on his woman. We last left the Suits gang just as the best friend was about to out Mike, and thus Harvey, the accomplice-enabler, to the head of the firm. Meanwhile, Mike has a second paramour — gasp, his paralegal coworker who can’t do well enough on the LSATs to become a lawyer; if only Mike could take the test for her — with whom he has unfinished business.

Final argument: Legal dramas seem to have become the salt of cable television. Between Franklin & Bash and an interminable number of Law & Order repeats, Suits could easily get lost in the sea of courtroom scenes. It doesn’t have the same attempted realism of many hospital shows, but it has just enough of a lawyer-show foundation to keep you oriented each week as you watch casually. Sure, there is a season-long arc to follow along with, but you can drop in for each episode not remembering much and still enjoy the bizarre bravado of Harvey and the puppy-dog eyes of Mike.