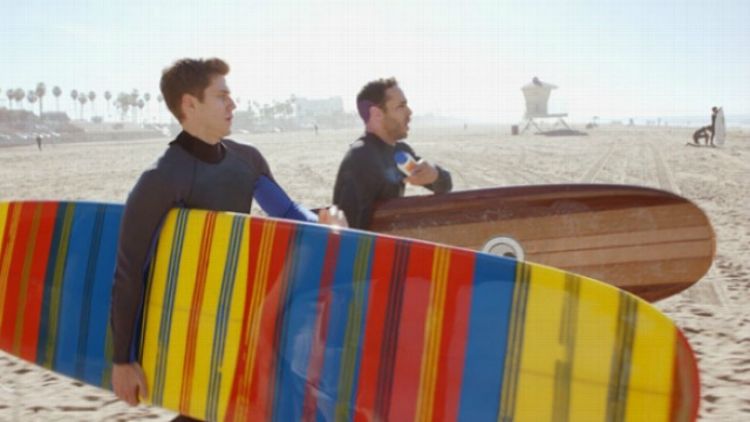 Welcome to blue sky season! Last Thursday, USA debuted its latest entry in the Summerwatch canon, Graceland. It feels like the network has been promoting this one for nine months, yet with little explicit information about what to expect. But now that it’s finally here, can it stand beside other cable titans like Burn Notice and Royal Pains? Will it tide you over until Breaking Bad returns? Here’s what we know after the pilot.

This is the show for you if you like: Friends, Law & Order, and White Collar. Graceland is supposedly based on a true story, though the precise facts are unclear. Apparently the U.S. government operates multiple properties in California to house undercover law enforcement personnel. In this show, the house is called Graceland and the occupants include four FBI agents, three DEA agents, and one customs guy. The show has already been highly educational regarding law enforcement because it never occurred to me that customs agents do anything outside of airports. The two principal characters are FBI agents Mike Warren (Aaron Tveit) and Paul Briggs (Daniel Sunjata), so I guess we know which agency is atop the hierarchy. Of course, all legal and police activity is set against an impossibly sunny Southern California backdrop, which is very noteworthy given the house’s floor-to-ceiling windows. The U.S. government doesn’t mind paying for prime beach real estate. The officers/roommates do things like celebrate busts with Laguna Beach–style bonfires, go surfing together, and recite the house rules frequently (“There’s no guns downstairs.” “No local girls upstairs. I know, I know, it sucks.”) And all of this is brought to you by the blue-sky master of White Collar, Jeff Eastin.

The person you are most likely to recognize from a previous show or movie: Aaron Tveit. You last saw him singing at the Oscars. He played French revolutionary Enjolras, a.k.a. Eddie Redmayne’s idealistic friend. He was also on Gossip Girl and starred in a couple of Broadway plays. All financials aside, is being the lead on a USA show a step up or a step down from Broadway? On Graceland, he plays eager rookie Mike Warren.

You might also recognize Brandon Jay McLaren, a cable TV regular. He was the teacher Bennett Ahmed on Season 1 of The Killing, he was on TNT’s Falling Skies, and if you were a fan of The N, you also saw him on the Canadian delight The Best Years as the heartthrob. He plays the lone customs guy, currently investigating bird smuggling.

The basic plot you need to know: Good news: There has only been one episode so far, and much of the pilot’s action was semi–tied up already. The main plot is this: FBI savant Warren was reassigned from a normal D.C. Bureau job to Graceland. The fact that he speaks no Spanish and will be undercover in Southern California is remedied by a Rosetta Stone–type tutorial. Warren thinks he’s there to learn from Briggs, the wounded, ingenious, surly FBI vet. Among the house rules (and this is more of a de facto one), there are no secrets in Graceland, except for Briggs. He went off on some mission, but it went awry. He came back like a Zen-ed-out Phil Jackson, and no one knows why. Warren was actually sent there to investigate Briggs, but no one knows that. So, there are actually two secrets in Graceland: What happened to Briggs, and that Warren is investigating him.

Final argument: The pilot started off slowly, with too much exposition, which is understandable for a new show with seven main characters that require some explaining. But the final 25 minutes were exciting. The roommates come together like the five kids in Captain Planet. Each one has his or her area of expertise that contributes to the ensuing caper. The fact that Warren is investigating Briggs is revealed in the show’s final minutes, but only after we’ve learned that Briggs is a historically successful and talented agent whose moral code may not perfectly align with the FBI’s. Plus, Warren is now investigating someone who saved his life (giving this relationship shades of Neal and Peter from White Collar). I’m hooked. I need to know Briggs’s secret, and since this is USA, we’ll probably find out in 10 episodes’ time.